Q&A with the 2019 Macathon winners 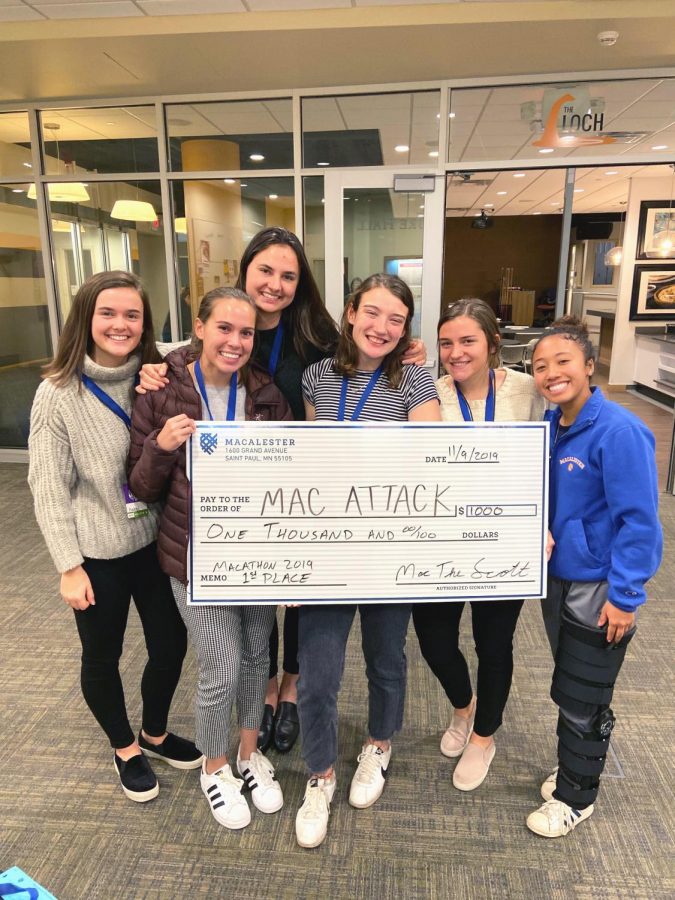 Hosted by Macalester’s Entrepreneurship department, Macathon is an annual overnight innovation challenge where groups of student participants invent an original service or product that aims to solve a real-world problem. The Mac Weekly sat down with this year’s Macathon winners to discuss their victory and inspiration for their project.

TMW: What was your final project?

Isabel Meyer-Mueller ’21: So we made [an] organic, sustainable, gender-neutral period subscription box, and it was a buy-one get-one model, so when you purchased one of these boxes or when you subscribed to one of these boxes, you were funding a pouch that would go to middle-schoolers in the Twin Cities, and it would be filled with sustainable pads and tampons and also educational information about menstruation.

TMW: What was the inspiration for your project? Did you go into it thinking you would do something with that or did you develop the idea over the course of the night?

Georgia Kazemi ’21: We really developed the idea over the course of the night but we kind of went into it thinking we wanted to either go for sustainability issues or women’s reproductive health issues. Once we got there, we kind of built those together.

TMW: How did you organize your team?

Claire Stafford ’21: We play soccer together and so does another team member of ours, Kate Bond [’21]. And Izzy [Meyer-Mueller] is [Beattie’s] roommate.

Kazemi: So last year we had been like, “Oh we want to do Macathon!” Because we went to the final presentations last year, and were feeling inspired.

TMW: Back to your product, how extensively did you go in prototyping your product? Or was it more of a theoretical concept?

Emelie Beattie ’21: It was more theoretical. We definitely did a lot of market research throughout the night, just trying to find what had already been established, and some of the period boxes that are out there. Then, we established criteria that we wanted our box to follow. Then, we did comparisons between the brands that already existed and our brand. With regards to sustainability, we said that if we were to ever pursue this, we would try to partner with brands that have already established a sustainable mission, so we tried to seek out some of those as well.

Kazemi: We did have a physical prototype for the box and the pouch.

Beattie: It included sustainable products but not necessarily ones we would actually look towards partnering with.

TMW: Over the night, what were the hard moments?

Kazemi: I think when we woke up in the morning there was a bit of panic, like “Oh gosh!, We have a lot to do”

Stafford: And also, everyone doing their individual activities, I know for me I’m not a computer science major and I don’t know how to build a website, so I was looking up templates to try to learn what to do.

Beattie: There’s learning involved, for sure.

TMW: So did you all stay up the whole night?

Kazemi: Had a little sleepover!

TMW: Would you say the hardest part of the night was the ideation and initial brainstorming?

Kazemi: I think it was, we had a lot of ideas and making that final decision, like “This is what we’re gonna go for, we have to make that decision because we’ll run out of time.”

Stafford: Also running it past all the judges, like “what are you thinking?” is a good idea, of our choices we had come up with.

Beattie: And they stayed very neutral in their feedback too. Some of them were like “there’s a very clear way to go with this” and we were like “What is that?”

Stafford: They didn’t tell us which one, it was more of a gut instinct thing.

Beattie: I’m not exactly sure. Izzy sent out a text and she was like, “I definitely do want to pursue this”. We had kind of been talking about that, and I think most of us are on board for going forward with this, trying to make this a feasible thing. Yeah, so looking towards that, obviously having the finances to back that up is very helpful. Next steps, we don’t really know what that looks like, but I think we wanted to meet with Kate Reiling about that to get some information about how we could make this possible.

Kazemi: Yeah, I think we’re gonna feel out the options. It definitely is more complex than just what we came up with, so it’ll be interesting to see if it’s actually something that’s doable, but it could be really cool to pursue it.

TMW: Along those lines, have you engaged with entrepreneurship in the past, or was this your first time?

Kazemi: I think for all of us this was our first. We’ve used the Idea Lab for fun things, but not with the Entrepreneurship office, which was kind of cool to get involved.

Stafford: It’s a cool competition. The idea of it is really cool.

TMW: Do you have any tips for future Macathoners, or major takeaways from the event?

Kazemi: I think going into it we were kind of afraid that none of us were coders, or that none of us have those skills, but then when we got there we were like “okay, we’ll do something that we can use our skills to”. Also, they say you can’t plan ahead, and I think that’s definitely true. Don’t try to go in there with a product because it’s really fun to come up with it in the moment.

Stafford: Also, I feel with that, you don’t have to make an app. Definitely do something that’s more in your wheelhouse. I think this was definitely something we could all relate to personally, which was more up our alley of things we could actually feasibly do.

Meyer-Mueller: Do something you’re passionate about, because I think it makes it easier to talk about.

TMW: Was there another project presented that you really liked?

Beattie: So actually, one of the other projects that made it into the finals with us was a food waste system, it had to do with storage space in your fridge to make sure that you weren’t wasting food. That was an idea that we had thought of doing throughout the night, that was actually the first idea that we pitched to the judges and then we moved away from that, but we did really like that idea.

Kazemi: There was a really cool anxiety scarf, with weighted blankets, the technology for that.

Beattie: All of them were really good.

Stafford: I was just happy we made it to finals, they had a ton of good ideas. Even within our group, people that didn’t make it to finals, we were just in awe of some of the things people came up with.

TMW: Were there any other favorite moments of the night?

Beattie: They feed you constantly.