Price and menu changes at Grille cause controversy among students 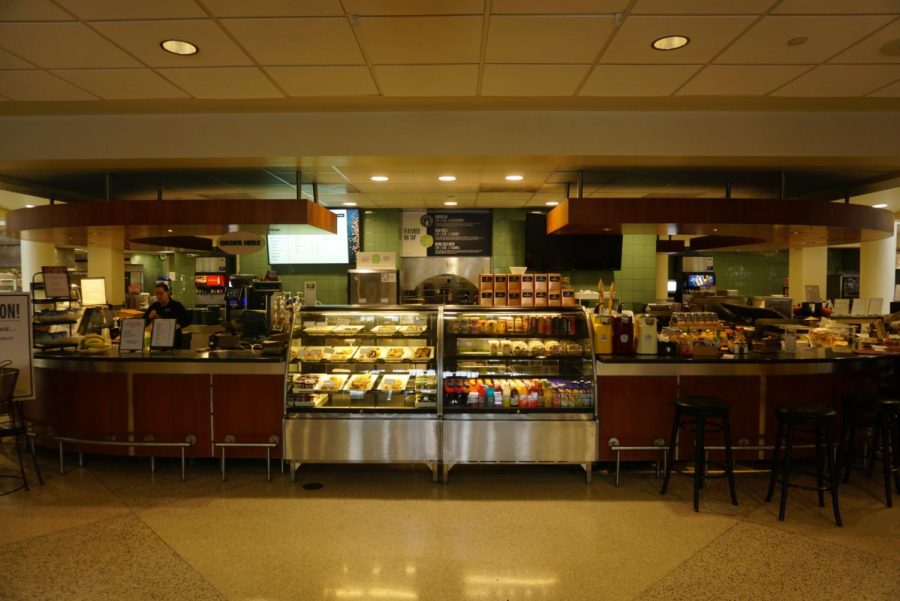 The Grille, located in the Campus Center, where the menu changes took place after fall break. Photo by Smith Mayse ’22.

After fall break, students were ready to re-engage at Macalester, getting back into their everyday rhythms. However, one essential aspect of life would change: the Grille made several drastic and abrupt changes to both the menu items and prices.

“I think that they are trying to change a lot and too fast,” Lukas Fraase ’22 said. “They could have taken student opinion into consideration more because it seems like the changes they are making help them more than us.”

General Manager Amy Jackson spoke to the motivation behind the changes saying that Bon Appétit, “wanted to emphasize some appetizer areas because we know how popular some of those are,” citing previous student proposals.

Jackson stated that another factor involved was the inclusion of “more farm-to-fork purchases within the Grille menu.” Jackson explained what exactly these purchases entailed, highlighting Bon Appetit’s attempt to create a more sustainable approach to food preparation. To be eligible, farms must be within a 150-mile radius and earn less than $5 million in annual revenue, a shift away from factory farms.

While the intent of these changes seems beneficial, the effect they had on the students was less positive.

“They think that we have money when we don’t,” Anna Švercl Hetzer ’23 said. “I think that if they were to justify a price increase, they would need a quality increase, which hasn’t happened.”

Many students agree, citing rising prices at the Grille as a major issue.

“I definitely cannot go as often,” Fraase said. “I went like two or three times a week last year, but now I’ll probably only go once a week.”

“As a middle person between the kitchen and student, I feel anger from both sides, whether it’s my manager getting stressed, or the students getting mad because the menu is too expensive, which I agree with,” they said.

Curtis said that the Grille has “been trying to get some more ‘gourmet’ items to raise prices, but what [the Grille is] serving now isn’t even that special.”

The appetizer sampler used to be a popular deal, “but now it’s definitely not, it’s more expensive and has less food,” they said. Previously students could choose three appetizers. Although this hasn’t changed, the appetizer menu has.

Working at the Grille before the menu change was much lower stress, but since the size of the menu has increased and the items are more particular, orders have become much more complicated.

“There was overlap on the menu, like the chicken tenders as a meal and in the tender melt,” Curtis said. Now, however, fewer food options use the same ingredients.

The changes made to the Grille were reportedly discussed well in advance.

“Typically, in the summer, we take time to discuss necessary changes in the upcoming school year,” Jackson said.

However, the menu adjustments were “a complete surprise to everyone, including cooks, student workers and even my manager,” Curtis said. “The problem is once you submit changes to the corporate Bon Appétit, you need to wait a year before making new changes, so we’re stuck with this for a year.”

Amidst all the confusion and adverse reactions, there is a way for students to shape future decisions. Both Curtis and Jackson invite students to express their opinions, explaining that Bon Appétit cares about student feedback.

“If everyone who is upset writes down their feedback, [management] will try to consider them when making changes for next year. They do take them seriously,” Curtis said.

Jackson mentioned that most operations “at Mac [are] viewed as a collaborative effort,” helping foster a relationship between Bon Appétit and students.

Jackson continued. “There are some concerns, very few, on our end and we are discussing what makes the most sense, business-wise.”