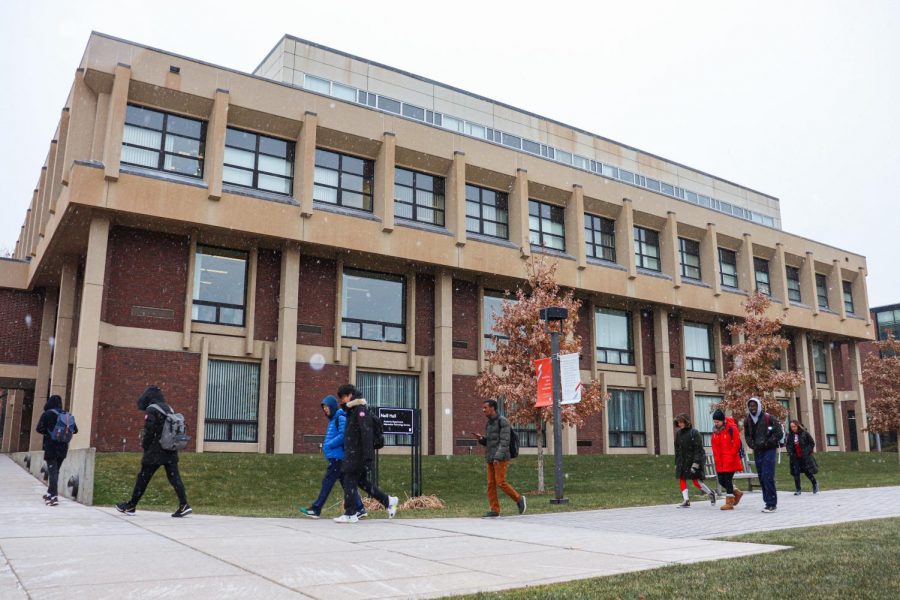 President Brian Rosenberg announced at a Tuesday faculty meeting his plans to recommend to the board of trustees that the college rename the Humanities Building. The building was named after college founder Edward Duffield Neill six years ago.

Rosenberg told faculty that, after reading a number of Neill’s published writings, it was clear that his racism — particularly his statements disparaging indigenous people — were damning.

“[Rosenberg] said initially he was skeptical about the renaming issue,” political science professor Patrick Schmidt said. “He said he assembled a bunch of readings, but it took him five minutes to realize how virulent those writings were.”

During the meeting, Rosenberg also credited to the sustained student activism led by Proud Indigenous People for Education (PIPE), as well as The Mac Weekly’s special issue “Colonial Macalester” for his taking action.

In a statement to The Mac Weekly on Wednesday afternoon, Rosenberg wrote that he had already made his recommendation to the board and that the campus could expect the board’s final decision “very soon.”

Rosenberg added that, along with their decision, the board would outline “the process going forward.”

“He clarified that though he appreciated the applause, he was not in favor of the erasure of history,” anthropology professor Olga González said.

“Which was a little bit confusing to me… because the removal, in this case, of the name from [the building formerly known as] Neill…  should not be interpreted as an erasure of history, but as complicating history.”

Rosenberg also said he did not support renaming other buildings on campus that take their names from college donors.

Word of Rosenberg’s announcement spread quickly across campus on Tuesday. PIPE co-chair Zoe Allen ’22, an enrolled member of the Rosebud Sioux Tribe, was in an indigenous film class when she heard the news.

Rosenberg’s recommendation comes after years of PIPE-led student activism. Over the last several years, their group has posted signs renaming buildings across campus after indigenous leaders each year on Indigenous Peoples’ Day.

This year, PIPE renamed the Humanities Building as Taoyateduta Hall after the man who led the Dakota during the U.S.-Dakota War of 1862.

Prior to Tuesday’s news, Allen and fellow PIPE co-chair Jennings Mergenthal ’21 had started planning a formal student initiative to change the name of the Humanities Building.

That Rosenberg was quick to take up the issue and commit to renaming came as a surprise.

“I thought this was going to be way harder, damn,” Mergenthal said. “If [only] I’d known enacting social change was this easy — was as easy as convincing white people to write an article about it.”