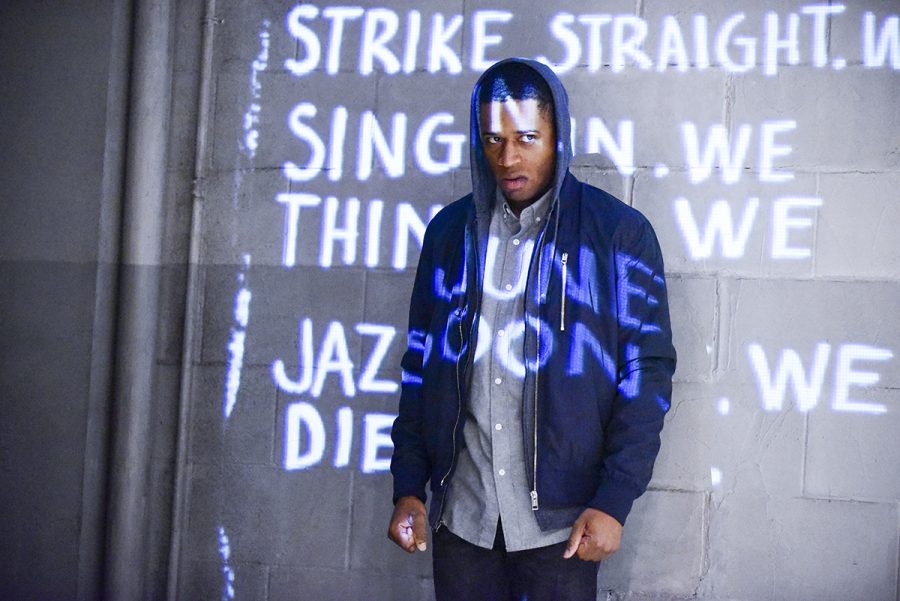 In “Pipeline,” written by Dominique Morriseau and directed by Lou Bellamy, the audience never actually sees Omari push his teacher, the act around which the play revolves. Even the videos his peers took which implicate him are never shown. But the point of the play is not to determine Omari’s guilt, nor is it to justify or excuse his transgression.

“Pipeline”, which played at Penumbra Theatre October 3rd through October 27th, is a nuanced, emotionally potent and urgent play that shines light on issues of race and inequality through the lens of Omari’s life and the lives of those around him. Consistent with Macalester’s emphasis on multiculturalism and diversity, the play conveys the reality of black masculinity in particular and blackness more broadly within the rigid education system. Several Macalester classes attended performances of “Pipeline” at Penumbra Theatre, where it played on October 1st through October 27th.

The opening act is immediately captivating in the way that a mother’s worry for her child tends to be. The audience sees Nya (Erika LaVonn), Omari’s mother, leaving a voicemail on her phone for Xavier (Ansa Akyea), who we later find out is her ex-husband. “It’s about our son,” she says.

Nya’s worried tone expresses the gravity of the situation. In pushing his teacher, Omari has run afoul of a system that does not value understanding his burdens or struggles as a black male. The label of ‘criminal’ may come to haunt him for the rest of his life; he may become a victim of the school-to-prison pipeline.

The play’s title is a reference to the pipeline, the disproportionate tendency of young students of color in America to end up incarcerated following perceived or actual violations of school or municipal policies. This disturbing trend serves as a constant background to the lives of the play’s characters.

But the play isn’t just concerned with the school-to-prison pipeline itself; it also delves into the pressures that young boys of color face in the school system and how those pressures can propel them through the pipeline.

Morriseau masterfully shows how the experience of black maleness and black youth is affected by societal expectations and informed by an inherent kind of frustration with being consistently misunderstood and unseen beyond the label of “black male.” By framing this experience through Omari, Morriseau points out that this issue is not addressed by simply giving black students a private school education without recognizing the history of oppression that burden them to this day.

Being a teacher at a public school herself, Nya is very familiar with student life. But instead of sending their son to a public school, she and Xavier send Omari (Kory Pullman) to a private school. Throughout the play, Omari hints at his parents’ negative view of the public school system. But they are woefully unaware that Omari’s struggles are not alleviated by a private school education.

In her role as a teacher, Nya seems more surprised at finding out that Laurie (Melanie Wehrmacher), her colleague, broke up a fight between two of her students using a broom than the very fact that the two students had a fight. In that scene, Dun (Darius Dotch), a school security guard, articulates the missing context behind the fight and, more broadly, the context Nya lacks in trying to understand her son’s anger and his resulting offense.

He says that to understand the violence and anger, one must first understand the pain that black boys carry inside themselves. After a charged back-and-forth with her son during which she pleads for “instructions” on how to raise him to not be angry, Nya eventually recognizes that Omari’s anger is “not his sin; it’s his inheritance.”

Being singled out by his teacher to answer a question may seem like a trivial reason  to become aggressive, but when the reading material is Richard Wright’s “Native Son” and Omari is repeatedly pressured to explain the main character’s crime, and what caused “the animal in him” to emerge, it becomes clear that his teacher, as well as society, provoked him into doing what he does.

This realization, though essential, does not allay Nya’s worry for her son. Charges may be pressed against him, and she knows that this would put him on the school-to-prison pipeline. Neither society nor the school system cares that Omari’s anger has a harrowing historical precedent. Nya’s worries are reinforced and embodied throughout the play by footage projected on the wall behind the stage of kids walking through metal detectors in a public school, smoking, fighting and dancing provocatively.

In one of the most intense scenes of the play, Nya teaches her class Gwendolyn Brooks’ poem, “We Real Cool,” while Omari stands in the shadows, invisible to all but the audience and his mother. He reads the lines one by one with an abrupt kind of force. “We die… die… die,” he repeats, reminding Nya of her greatest fear for her son, leading her to have a panic attack.

Though she centers the play  around Omari and Nya, Morriseau also makes the impactful choice to portray Xavier as a father who is emotionally absent in Omari’s life. He still shows up for every birthday and sends his child support checks on time — almost as if they are automatic, Omari remarks in the play. But to Omari, while Xavier has moved on from his marriage and found success in his career. He has failed as a truly supportive father and as a role model.

Omari has his own issue with being present. His girlfriend and schoolmate, Jasmine (Kiara Jackson), offers a glimpse into Omari’s romantic life. She strives to understand him and he — in his own way — tries to be honest with her. He ends up running away without telling her where he went and doesn’t return her calls or messages. Even though Jasmine seems to understand him better than anyone else, Omari keeps her at a distance.

“Pipeline” shines light on numerous issues surrounding family, black masculinity, the school system and systemic racism. For some members of the Macalester community, the play reflected situations they had experienced in their own lives.

“It was very emotional and sad for me [to watch the play] since I was suspended in elementary school for not answering a question,” said Wilda Batin ‘23. “[The teacher] said I was being ‘threatening’.”

For Professor Harry Waters Jr. of the theatre department, the play likewise reflected his own experience as a former black private school student and also expressed a broader issue of race and education.

“The expectation when you are the black student and an issue comes up about a black character is that you’re supposed to know and respond and you get pushed,” Waters said. “The reaction that you’re having maybe has nothing to do with the teacher understanding who you are, but it has to do with you understanding what’s being asked of you.”

Though the play ends on a positive note, with Omari back at home and Nya having convinced the school board not to charge him, the lessons Morriseau leaves are meant to be enduring. The school system must be fundamentally reformed to protect the kids who it is meant to serve. Otherwise, there is no hope for students of color to escape society’s expectations for them built on systemic racism. As artistic director Sarah Bellamy writes in the program for “Pipeline,” “we are invited to bear witness and more importantly invited to take up the work of making our schools safe for all our children. It is not their job to make us comfortable, to attend to our fears and insecurities, to assuage our prejudices.”