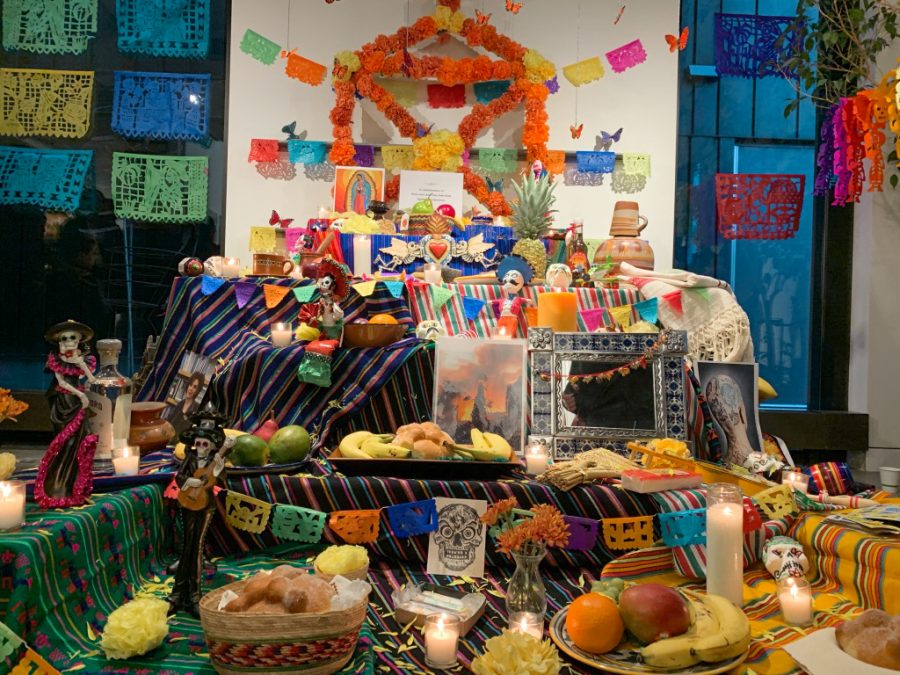 Board members of ¡Adelante! spent last Saturday and Sunday in the lounge of the Janet Wallace Fine Arts Center making strands of papel picado by cutting intricate patterns out of colorful paper, building a multi-level altar for the annual Macalester Day of the Dead celebration on Nov. 5.

Professor J. Ernesto Ortiz-Díaz was in charge of organizing this campus event, which includes live music, traditional food and drink, a dedication ceremony and speeches from representatives from the Consulate of Mexico.

“This is the first year that the Consulate of Mexico is coming,” Ortiz-Díaz said. “I think it’s important to have someone who represents Mexico officially to connect with the students.”

When Ortiz-Díaz began teaching at Macalester in 2011, he felt there was a lack of recognition for the Day of the Dead, otherwise known as Día de los Muertos. He had heard that former Macalester professor Juanita Garciagodoy had organized a campus celebration of the Latin American tradition, but after her retirement the celebration disappeared.

In 2014, Ortiz-Díaz revived the tradition and oversaw the construction of an altar, also known as an ofrenda, in the basement of the Spanish language house. The celebration eventually grew, and last year, the altar moved to the Janet Wallace Fine Arts Center, where there is more space and visibility. Ortiz-Díaz is satisfied with the new location.

“I wanted to share this event with the rest of the community, and I didn’t think the basement of the language house was the best venue,” he said.

The construction of the altar is a collaboration between the Spanish and Portuguese Department and ¡Adelante! students. Ortiz-Díaz puts emphasis on the students’ involvement because he recognizes the impact that the annual celebration has had on Latinx students.

“Talking to ¡Adelante! students, the celebration really means a lot to them, because it helps them connect with the culture,” he said.

Ortiz-Díaz grew up celebrating Día de los Muertos in Mexico, but since moving to the United States the tradition of building an altar represents something new to him.

“In Mexico, [building altars] was more private and family-oriented,” he said. “In the United States it’s that, and also a way to connect to my culture and remember the country that I left behind.”

On Wednesday afternoon the lobby of Janet Wallace filled with the chatter of  Macalester community members, many sipping on Mexican hot chocolate as they mingled. The altar was the brilliant centerpiece of the event, covered in flickering candles, sugar skulls, paper flowers and photos of deceased loved ones of people in the Macalester community.

Ortiz-Díaz began the event by dedicating the altar to those who have died fighting for liberation around the world, specifically “our brothers and sisters in Ecuador, Chile, Nicaragua, Honduras and Guatemala protesting against the legacy of colonialism, and political and economic intervention in their societies.”

¡Adelante! board members Jonathan Alvarado ’21 and Amelia Medina ’22 read Pablo Nerudo’s poem “América Insurrecta,” which was followed by an informative video made by ¡Adelante! students about the historical significance of the Día de los Muertos.

The video also explained the meaning behind different aspects of the altar, such as how the multiple levels represent Earth and heaven and how the candles and marigold flowers are believed to guide the dead back to the land of the living.

Although the Día de los Muertos is a Meso-American tradition with roots throughout all of Central and Southern America, many think of Mexico as the primary country that celebrates the holiday. This influenced Ortiz-Díaz’s choice to invite Head Consul of the Consulate of Mexico in St. Paul Gerardo Guerrero to the campus celebration.

Guerrero spoke to the crowd about the importance of the celebration in Mexican history and how it blends beliefs from pre-colonial civilizations and Catholic Spanish colonizers. He also touched on the current political climate and how recent aggression towards Latinx people in the United States makes American celebrations of the Día de los Muertos even more impactful.

“[For Latin Americans,] this is one of our most important cultural expressions,” Guerrero said. “This is the fifth event I’ve attended to celebrate the Day of the Dead, and I’ve been impressed to see that Americans have been coming and learning about the tradition. It’s emotional for us [Mexicans] to see that [Americans] are still interested to be here.”

For Tatiana Jimenez Thompson ’23, accustomed to celebrating Día de los Muertos with her Mexican family in Minneapolis, attending the campus celebration was comforting.

“It makes me really happy Macalester has this event. Because it was a really important event for me and my family, and I’m happy I’m able to celebrate it at my new home,” she said.

The altar will be up until Nov. 11 in the lobby of the Janet Wallace Fine Arts Center.