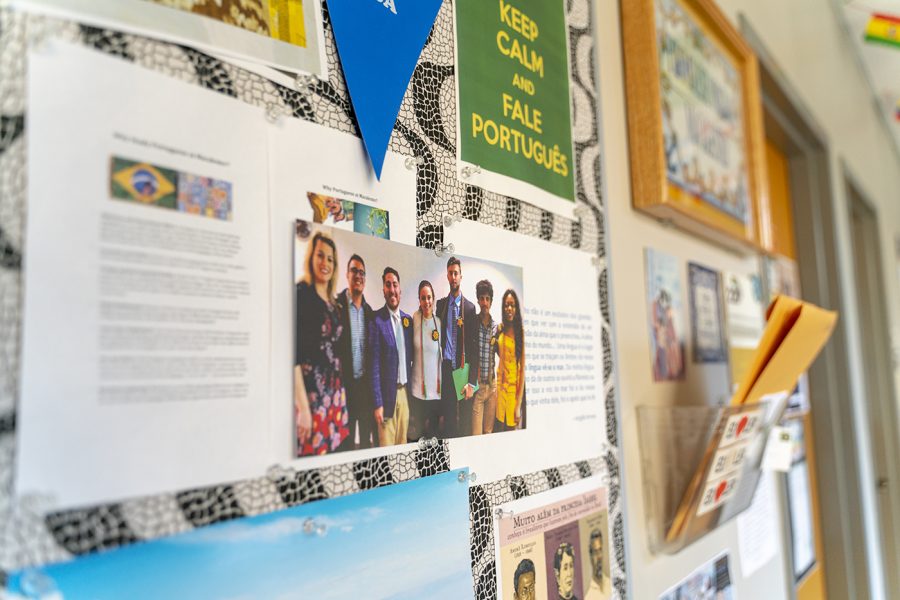 The wall outside the Portuguese program office. Photo by Owen Pearlman ’23.

On the bulletin board outside Macalester Portuguese Program director professor Ernesto Ortiz-Díaz’s office hangs the photos of five students, the first cohort of Portuguese minors who graduated in the class of 2019.

Portuguese emerged at Macalester in the 1980s as a required subsidiary course for students studying Spanish. As student interest grew and additional instructors joined its leadership, the program developed into a concentration and, as of last year, a minor. Today, the Portuguese Program contains a tenured faculty member, Ortiz-Díaz, a non-tenure track professor, Fernanda Bartolomei-Merlin and operates under the Spanish and Portuguese department.

For Macalester’s Portuguese students, however, the program lacks a valuable learning opportunity: a language house.

Language houses at Macalester are a beloved and unique feature of the college’s foreign language programs. Residents immerse themselves in the culture and conversation of their chosen language while experiencing an alternative to learning in a classroom.

The Portuguese Program is the only global language at Macalester that does not have its own house.

“As I started teaching, since the very first semester, students started coming to me to ask me about having a Portuguese house,” Ortiz-Díaz recalled. “This is an issue that has been going on for many, many years.”

In 2014, the Portuguese Program tried to designate one of the floors of the Spanish house as solely for Portuguese students. Looking back, Ortiz-Díaz called it an idea “doomed-to-fail.” With no space to host cultural events or for the Portuguese residents to commune outside their bedrooms, the plan was unsuccessful.

In 2017 Ortiz-Díaz approached Provost Karine Moe with a request to discuss the establishment of a Portuguese house. He was directed to Vice Provost and Associate Dean of the Faculty Paul Overvoorde. Ortiz-Díaz recalled Overvoorde conveying the message that “it was not the right moment to advocate for it” due to financial concerns.

A year later, in 2018, with student interest still strong, a group of Portuguese students met with President Brian Rosenberg. They came prepared with records of current student and alumni requests for a Portuguese house.

Pablo Monterroso ’22 was one of the students who met with Rosenberg. Their goal, he wrote in an email to The Mac Weekly, was “essentially displaying that there was interest from the students (not just professors).”

With a positive response from Rosenberg, the Portuguese Program began to plan an official advocacy effort.

Last May, the Department of Spanish and Portuguese submitted a formal proposal to the administration advocating for the establishment of a Portuguese language house. The proposal cites the growing popularity of the Portuguese language program on campus and includes quotes by Portuguese students and alumni on the foreseeable value of the language house. It also suggests ways in which the college can overcome the financial hurdles which establishing a new language house and hiring a native speaker for the house may present. It presents the possibility of using 204 Vernon street, a Macalester-owned property currently used as housing for junior faculty.

The proposal is signed by Spanish and Portuguese Department Chair Cynthia Kauffeld as well as Ortiz-Díaz. Ortiz-Díaz hopes it will prompt Macalester’s administration to appreciate the strength and passion of the Portuguese Program and respond by creating a Portuguese language house with a hired native speaker.

“It’s a small [program]” Ortiz-Díaz said. “But we have big dreams.”

While the Portuguese Program falls under the broader department of Spanish and Portuguese, Ortiz-Díaz emphasized the equal strength and legitimacy of both programs.

“If we think in a bird, that bird has two wings,” Ortiz-Díaz said. “One wing is Spanish and the other one is Portuguese.”

This structure resembles that of Macalester’s Asian languages and cultures department which contains major and minor tracks for both Japanese and Chinese. Both of these languages have their own house on Princeton and Vernon Street, respectively.

“We wouldn’t be the first [department] to have two houses,” Ortiz-Díaz said. “It wouldn’t make any sense to have Chinese students, for example, in a Japanese house or vice versa.”

The Spanish house is meant to be available for the Portuguese Program to host events. In practice, however, the house doesn’t function as an equally shared space.

“We have to accommodate people at the Spanish house to organize our event[s] and most of the times it is not ideal,” Ortiz-Díaz said.

For Ortiz-Díaz and Portuguese students at Macalester, the establishment of a house solely for Portuguese is long-awaited.

Vivian Bauer ’21, a linguistics major with minors in art history and Portuguese, was initially drawn to Macalester’s rich language program as a prospective student.

“Before I came to Macalester I really considered language departments,” Bauer recalled. “I kind of chose the school because there were a lot of options and there were houses, there were these immersion options[…] I kind of always had in my head that I wanted to live in a space where I was speaking a different language to really practice.”

While Bauer originally considered pursuing a degree in French, she became passionate about Portuguese after taking an introductory course. Yet she was unable to study the language in the environment she had hoped.

“I decided to go to Portuguese, but then there wasn’t that house to have an immersion” Bauer said.

A Portuguese house would have been a valuable opportunity for Bauer as she plans to spend the spring semester studying in Brazil.

For Ortiz-Díaz, study away preparation would be one of the key purposes of a Portuguese language house.

“It’s a space in which not only they practice language and they get to know the culture of the Portuguese speaking world, but also, it’s an opportunity for them to be better prepared before they go abroad and study away in Brazil and Portugal,” Ortiz-Díaz explained.

Due to course arrangements for the fall semester, the department did not offer a Portuguese class at Bauer’s level.

“It’s been hard because I haven’t been able to practice,” she said. “There’s no space for us to really practice regularly.”

For Monterroso, a Portuguese language house would be a valuable and rare learning opportunity for Portuguese students.

“Immersion is by far the best way to learn a language, even more so than the classroom,” Monterroso wrote in an email to The Mac Weekly. Before coming to Macalester, he spent four years in Mozambique where the national language is Portuguese.

“That is part of the way I picked up Portuguese, so I can say it first hand.”

Monterroso is pursuing the pre-med track, with a major in neuroscience, a concentration in community and global health and a potential minor in Portuguese. He hopes to use Portuguese in a future career of public health in Portuguese speaking communities, including those of Mozambique and Brazil. In addition to the benefits offered to Portuguese students, Monterroso emphasized that a Portuguese house is a recognition of not only the legitimacy, but the excellence of Macalester’s Portuguese Program.

“It is generally an issue of equality,” Monterroso wrote in an email to The Mac Weekly.

This past year, the U.S. State Department officially named Portuguese a critical language, a title designated to languages that play a key role in global politics, economics and culture. Portuguese is the most spoken language in the southern hemisphere and the sixth most spoken language in the world. Yet few other liberal arts colleges in the nation offer the language as more than a required course to support the Spanish major. The strength of Macalester’s Portugeuese Program is a rare find among other institutions — as Ortiz-Díaz calls it, a “jewel.”

Along with German, the Macalester Portuguese language program has received the most Fulbright scholarships among its students. This past year, Portuguese minor Gloria Odoemelam ’19 was awarded the highly competitive Critical Language Scholarship (CLS), a prestigious program led by the State Department to fund Portuguese students studying in Brazil.

For Ortiz-Díaz, these accomplishments and the singularity of the Macalester Portuguese Program justifies his advocacy for a Portuguese language house.

“This is very important,” Ortiz-Díaz said, “not only for [Portuguese  students], but also for the college. This is a program that has put Macalester on the map in the field of the Brazilian and lusophone studies.”

The proposal to create a Portuguese house is still under consideration by the administration. Yet Ortiz-Díaz hopes for the best.

“Students really want to have a Portuguese house, they want to have the same opportunities that other language students have on campus,” Ortiz-Díaz said. “We are waiting for the great news.”