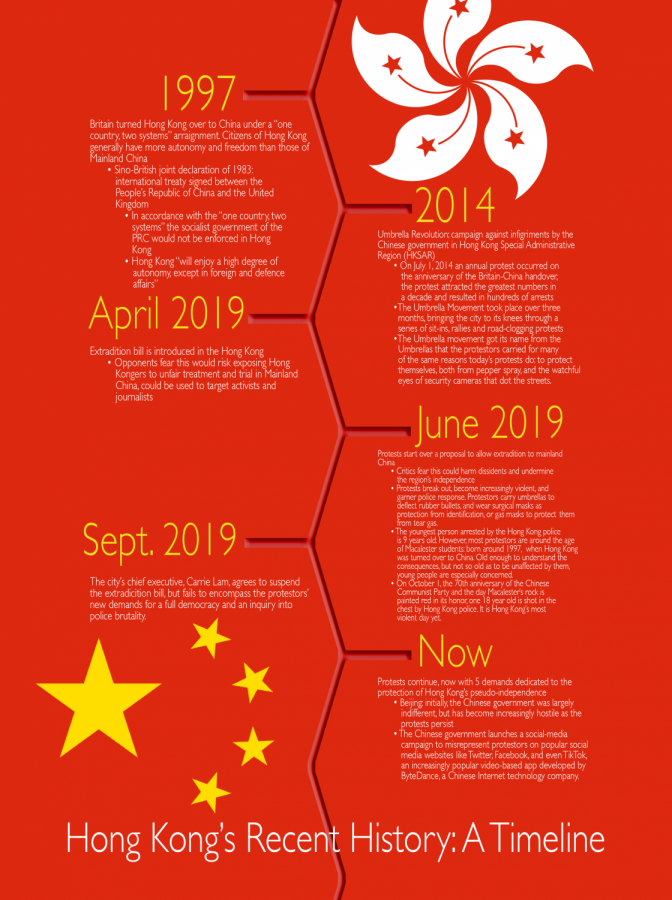 During the week of Oct. 1, the rock in the middle of the great lawn became a distillation of the conflict between the Chinese government and pro-democracy protesters in Hong Kong.

First, the rock was painted in honor of the 70th anniversary of the Peoples Republic of China. Later that day, though, an unknown individual painted over the pro-China message with the words “Free Hong Kong,” in simplified Chinese characters.

Not long after, “Free Hong Kong” was painted over with words reading “Only One China.”

Hong Kong is a small peninsula off of southwestern China that was a British colony for the majority of the nineteenth and twentieth centuries until, in 1997, the city became a special administrative region of China with the signing of the Sino-British Joint Declaration.

The terms of the declaration, commonly referred to as the handover, mandated that Hong Kong retain its capitalist economy and democracy until 2047.

This uncertainty about Hong Kong’s future has led to consistent upheaval in the region. The Umbrella Revolution, a campaign against Chinese influence in Hong Kong after the Chinese Communist Party (acc) proposed reforms to the region’s electoral system, lasted roughly three months during the summer of 2014.

This year’s protests, which began in June, mobilized in opposition to an extradition bill in the Hong Kong legislature. The bill would have allowed certain Hong Kongers to be tried in China. The protestors’ concerns evolved to include questions about freedom and democracy in the region more broadly.

Music professor Chuen-Fung Wong is a Hong Konger and based his research out of the region during the summer of 2019. He attended several protests in June.

“I, like many other people in Hong Kong, joined the first few protests in June, and also maybe one more in July,” Wong said. “The first time, there was one million [protestors]. The second time, it was close to two million.”

Since the first protest, tensions have escalated between protesters and police, with each side becoming increasingly violent.

A Macalester student (ho asked to remain anonymous was born in Hong Kong and lived in the city throughout her adolescence. Although she is a United States citizen, she has the ability to live, work and vote in Hong Kong without a visa.

“[It’s stressful] to see in your home town and to see these restaurants you used to eat at and to see them destroyed,” the student said. “My parents are the ones who are there right now. My dad was tear gassed last weekend.”

Since the first protest, over 2,000 people have been injured and at least as many people have been arrested. Police have primarily relied on tear gas and rubber bullets, but as violence on both sides intensifies, they have turned to the use of live rounds.

The rock highlighted an ongoing conversation about free speech and democracy in Hong Kong — and the competing messages on display elicited emotional reactions from members of the Macalester community.

One student, a Chinese citizen who asked to remain anonymous, had a different take.

“I think the idea of Chinese patriotism and nationalism is sometimes misunderstood, and is being ‘authorized’ as this evil thing,” they said. “It’s not. It’s just that sometimes, when states actively use that as a political weapon, it’s hurtful.”

The conflict has played out on other campuses in the Twin Cities as well.

On Oct. 11, the group Liberty for Hong Kong MN organized a protest in support of Hong Kong that attracted some 100 protesters on the campus of the University of Minnesota. Many wore black in solidarity, a color that the protesters have adopted as a symbol of opposition.

At the same time, a pro-CCP group mainly composed of University of Minnesota students mobilized to oppose the protest. By some estimates, the counter-protesters outnumbered those supporting Hong Kong by two-to-one.

Several members of the Macalester community, including Wong, attended the protest. Some participated, while others only observed.

“To me, it was the only right thing to do given the escalating control from China,” Wong said. “As somebody who was born there, who was raised there and also who has many, many, family and friends there, there is a need to stand up to the escalating repression from the Communist regime in China.”

In addition to music, Wong studies the Uyghurs — a Muslim population in China’s Northwestern region of Xinjiang that has faced extensive discrimination by the CCP.

Roughly 10 percent of Xinjiang’s Uyghur population, more than one million people, are interned in what Omar Kanat, director of the Washington, DC-based Uyghur Human Rights Project, called “concentration camps” in an interview with NBC News.

According to an estimate from the Australian Strategic Policy Institute, a self-styled “independent, non-partisan think tank,” there are 143 camps detaining Uyghur people.

The CCP claims the camps are part of a counter-terrorism and anti-separatist strategy. In 2018, Xinjiang Chairman Shohrat Zakir called detainees “students” engaged in a “vocational education and training program.”

Wong feels his critical lens may have made him a person of interest for the Party.

There is reason to believe that the Chinese government is monitoring the activities of Chinese citizens, whether they are in the country ornot.  The wide-ranging censorship policies in China affect school curricula, literature, private messaging, television and print media.

The anonymous  student has experience with the Firewall and Chinese surveillance and offered insight into the Chinese perspective.

“I wouldn’t call it surveillance from that perspective, if you’re growing up in that environment,” they said. “People see surveillance as a protection, mostly as it’s supposed to catch people who broke the laws. They believe the government officials are out there looking out for them.”

The student attended the protest at the University of Minnesota to observe and was hesitant to post anything in support of either side on social media.

“If you post anything political, if you post anything that you believe the party, the government doesn’t want you to post, you don’t know what’s going to happen to you,” they said. “If you’re outside the Chinese Great Firewall, you’re able to look at the record of how they’ve treated activists who they vehemently disagree with — you wouldn’t want to be one of those activists.”

Another Macalester student who attended high school in China for three years agreed. They may want to return to China after Macalester, and know that posting negatively about the country online could have consequences down the road.

“Having lived in China and studied there, I know that your online presence is an important part of the visa application process,” the student said. “I’m totally comfortable speaking my mind when it comes to Chinese politics, and I’ve even done that, to some extent, in China among the foreigner community.

“But in terms of having an online trail that would connect me to something that’s anti-Chinese government, it scares me that that would limit my options in terms of being able to reenter the country to continue studying or working or traveling in the future,” they continued.

Surveillance, this student explained, is ubiquitous. The Chinese government employs a wide range of tactics to track citizen behavior, including the widespread use of video cameras’ facial recognition technology in public places.

An American Macalester student who studied in Taiwan had a similar perspective — drawing a parallel between the situation in Hong Kong and the situation in Taiwan, an archipelago that has been recognized as an independent country by several other countries around the world.

The student also attended the protest, but was hesitant to choose sides. They were surprised by hundreds of students that mobilized in opposition to Hong Kong.

“I knew that a lot of people were very against the Hong Kong protests, but I didn’t realize the movement was that big,” they said. “It was crazy and surprising.”

Of the roughly 1.1 million international college and university students in the United States, one third come from China. Nationwide, during the 2017-2018 school year, over 360,000 international students were from Mainland China and 7,000 were from Hong Kong.

Wong believes there is a need on Macalester’s campus for conversations about what is happening in Hong Kong — conversations that go beyond attending protests and painting messages on the rock.