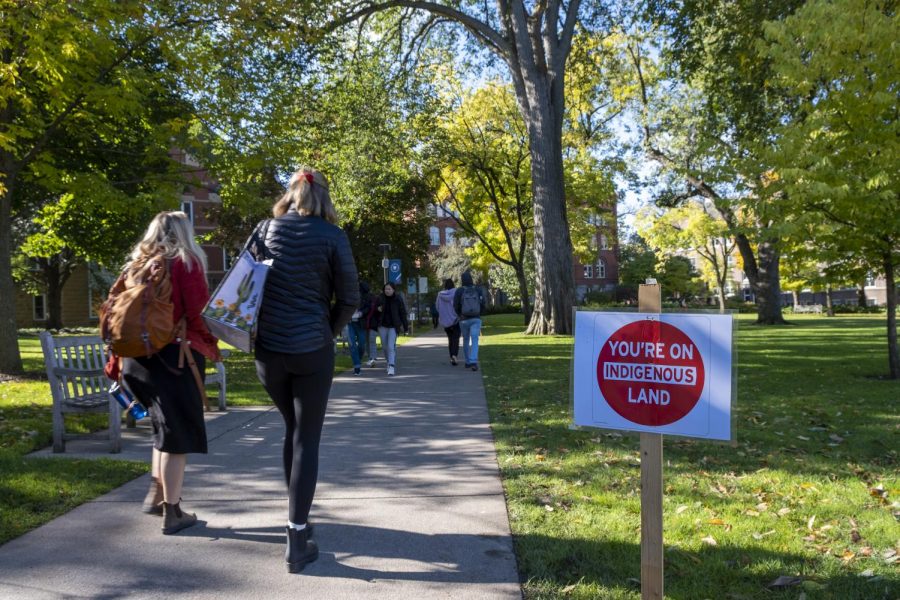 Students walk along Old Main lawn next to a sign from PIPE in honor of Indigenous Peoples' Day. Photo by Kori Suzuki '21.

As Macalester struggles to come to terms with its colonial legacy, some on campus are looking to the future — eyeing ways to create a more inclusive and diverse college.

“If the school doesn’t want to give up their land, fair enough — but increasing the number of minority students on campus, giving more scholarships, doing more to let equal opportunities [be] had by everyone, specifically Native people, are good next steps,” Somani said.

“It’s a good way the college could show they care and that they want to work towards equality while not doing the radical step of giving up land,” she continued.

Macalester’s admissions policies have not always pursued these goals.

In 1968, Macalester launched a new initiative, the Expanding Educational Opportunities (EEO) program, which aimed to recruit low-income domestic students of color to the college and provide them with financial and institutional support.

The program was the result of advocacy from a group of black student activists in the 1960s as part of the nationwide Black Campus movement, which sought greater support for black students on college campuses. In the 1968-1969 academic year, just 3 percent of Macalester’s student body were students of color.

According to the archival website “Multiculturalism at Macalester,” created in 2018 to honor the 50th anniversary of EEO, the program specifically targeted black students, Mexican-American students, Puerto Rican students and indigenous students.

It was intended to provide full financial support to 75 incoming minority and low-income students, all but one of whom were students of color.

But the EEO’s success demanded ample funding, and when longtime benefactor DeWitt Wallace withdrew financial support from the college in 1971 — citing “extravagant” programming — the EEO came under siege.

Following Macalester President Arthur Flemming’s resignation in January 1971, the program was cut significantly. By 1984, the EEO had dissolved.

Following the termination of the EEO, the diversity of the student body suffered.

Soon after, the Black House and Hispanic and Indian House closed. Other curricular and administrative programs being designed for students of color, including a proposed “Afro-American Center” and an “American Indian history concentration” were shelved.

In the years following the demise of EEO, Macalester struggled to maintain a population of domestic students of color in line with U.S. demographics. The college shifted their focus to recruit more middle-class students of color, who would not need as much financial support to attend. Total minority enrollment has been increasing steadily since 1988 — nearly doubling from 1988 to 2000 and doubling again from 2000 to 2010.

Since 2010, the number of students in the U.S. who identify as people of color has increased to 33 percent, closer to the proportion of U.S. citizens who identify as non-white.

Even so, the number of indigenous students at Macalester has never been as high as it was in 1975 under the EEO.

“Most of the students who self-identify as indigenous are not from the Twin Cities, and very few of them are from Minnesota,” Proud Indigenous People for Education (PIPE) co-chair Jennings Mergenthal ’21 said.

“There’s not an active engagement with indigenous communities for recruitment to Macalester… which also puts a broader onus to educate people on the indigenous students who are here,” they continued.

Associate Director for Diversity and Inclusion Aisha Gonzalez and Director of Recruitment for Admissions Elyan Paz are trying to fix that.

Paz said that admissions has been steadfastly focused on local recruitment in 2019, making moves to visit approximately 100 metro area high schools and working to engage with local identity organizations.

“Locally, we did a Native American college fair, which was a very community-organized, grassroots-style event,” Gonzalez said. “There’s also a couple local organizations that we’ve reached out to that we’re working on trying to schedule visits with.

“For example, South High School has a specific All Nations organization on their campus that we are trying to get in touch with, so we’re really just thinking about how we can add those pieces to our recruitment,” she continued.

“It’s obviously better that they’re doing this than if they weren’t doing it, but it shouldn’t be treated like an endpoint,” Mergenthal said.

Indeed, according to Dean of Multicultural Life Marjorie Trueblood, it’s just a start.

“For a long time, in a lot of places, it was about ‘how do we get more underrepresented students into these institutions?’” Trueblood said. “But that’s not enough. In the past 20 years in terms of our student body demographics I think we’ve doubled the percentage of students of color on this campus, and what do we hear? That people don’t feel like they belong.

“It’s not enough to provide access,” she continued. “It’s also about, what are we doing to provide a sense of belonging to students where they’re not just surviving but actually thriving?”

Gonzalez said providing that support has been a focus as well, and, to that end, the admissions office this year hired three new diversity fellows to address both recruitment and on-campus support.

“The idea behind the fellows is that they not only help with their outreach and recruitment side but assist with other admissions pieces as well,” Gonzalez said. “They will also be aiming to support folks in their first year transition next year.”

To accomplish that task, admissions has been working closely with the Department of Multicultural Life (DML) specifically.

“Aisha has been great in thinking about, ‘Okay, if we’re going to go after these groups, what supports do we have in place?’ And if we don’t have it in place, how are we advocating to make sure we have those resources for when those students arrive here,” Trueblood said.

“Thinking about our indigenous or Native American students, about how small that population is,” she continued. “I know that PIPE would love to see more people so that all of that work isn’t falling on the shoulders of two or three people.”

Trueblood and Gonzalez will both serve on a forthcoming Presidential Council on Equity and Institutional Transformation, which will aim to drive efforts for multiculturalism and inclusivity at Macalester.

“We will be conducting an audit of our current work in creating an inclusive campus, looking at where are we succeeding, where are we partially succeeding and where are there gaps in our efforts,” Trueblood said.

Trueblood hopes this work will have an impact.

“How are we judging success here at Macalester? I think a lot of us have our eye on this sense of belonging,” she continued. “There really isn’t a big achievement gap between white students and students of color with six-year graduation rates — but we know there is a difference in the experience students are having.”