Decolonizing Macalester: what comes next 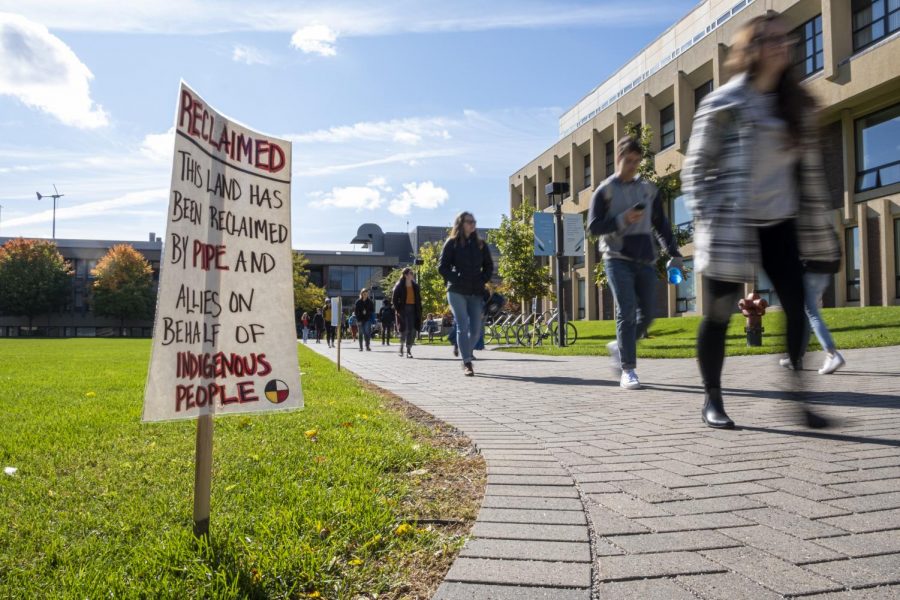 Macalester's Shaw field with a sign designed by PIPE in honor of Indigenous Peoples' day. Photo by Kori Suzuki '21.

In 2013, Macalester’s senior administration and board of trustees decided to pay tribute to the college’s founder and first president Edward Neill by changing the name of the Humanities Building to Neill Hall.

It seemed, at the time, like a relatively insignificant change.

“Neill was a unilateral decision,” anthropology professor Olga González said. “I really don’t think that they thought it was going to be a big deal.”

They were wrong. Neill was a white supremacist who desecrated indigenous graves and opposed the co-education of Macalester — and the college’s decision to honor him so long after his death suggested an extreme level of ignorance of and disregard for its true history.

González called the renaming a “moment of awakening,” while educational studies professor Brian Lozenski called it a reminder of “the mountains we need to climb.”

The name change did not immediately provoke a significant response. But over the past several years, thanks in large part to the activism of Proud Indigenous People for Education (PIPE), more and more people have become aware of who Neill was and how he connects to Macalester’s past and present.

“Do [faculty and administrators] know about the name also? Are they educated about what’s happening? Or are they lying, and saying, ‘Oh no, he was a great person,’” Cabellos-Gonzalez said.

At an institutional level, it is the latter. In no official document accessible online does Macalester acknowledge Neill’s extensively documented history of white supremacy, grave robbery or misogyny. Instead, Neill is presented as a great public servant and civic leader, celebrated at events like Founders Day.

“To a degree, it sends the message that Macalester will structure and restructure history to fit its needs,” PIPE co-chair Jennings Mergenthal ’21 said. “If the trustees want us to remember Edward Neill as a fine, upstanding man… that’s how he will be remembered — unless there is active challenging of that narrative.”

To do that, community members are forced to seek out unofficial and under-privileged histories.

“[Neill is presented as] a missionary, he’s Presbyterian, he supports education, he created the possibility of having this excellent education, he was an abolitionist, he fought in the Civil War, so… no harm,” González said.

“At the same time, he moved here to Minnesota in 1849,” she continued. “When was the Dakota War? When was Macalester founded? Slightly after the Dakota War, where Dakota people were pushed out. So we begin to make all of these connections that we are not aware of.”

Since 2013, more and more people on campus have become aware of the darker parts of Neill’s history. But those connections don’t stop with Neill himself.

“Not only do I work in Neill Hall, I work in Ramsey County,” Lozenski said. “What we need to fundamentally understand is that the naming of buildings, counties, lakes are not separate from the social fabric that we live in.

“For me, knowing the building in which I work, is named after someone who I fundamentally disagree with, it’s not that far removed from my general experience of living in a country that I think is fundamentally built on the subjugation of my ancestors,” he continued.

“If we, as professors, as a college, are constantly demanding from students critical thinking, let’s do the same with our own history,” González said. “It will make us better. It cannot make us worse.”

Thinking critically about Macalester’s history is no small task. Like almost all of its peer colleges and universities in the state, Macalester was founded in the period immediately following the U.S.-Dakota War on land stolen through military conquest and the violation of treaties with sovereign, indigenous nations.

History professor Katrina Phillips, a member of the Red Cliff Band of Lake Superior Ojibwe, said that it is “painfully ironic” that she is assigned to teach classes in Neill Hall.

“The reason all of these institutions could be founded when they were is because of cessions of Indian land,” Phillips said. “That’s not an indictment of Macalester. Nobody who is at Macalester today is directly responsible for any of this. But if we’re going to talk about the history of Macalester College, we can’t start in 1874.”

“Recognizing that indigenous peoples were here long before any of these institutions is really crucial to understanding why there are people who struggle with having a building on campus named Neill Hall,” she continued.

But while there is significant support for changing the building’s name, many of the people who want to see the name changed also understand that such a step is not in itself enough to fundamentally alter the nature of the college.

“Symbolism definitely undergirds lots of things,” Lozenski said. “But symbolism is also very different from policy and from material realities… we can get in danger by just going after symbolic representation without actually changing the material conditions.”

The material conditions, as of now, are not good. Macalester has just two indigenous faculty members, only one of whom is tenure-track, and just a handful of indigenous students — along with historic structural issues around diversity and inclusion.

Lozenski pointed to Macalester’s hiring and retention records for faculty of color as an area for the college to improve, and suggested that, in the future, professors could be evaluated in part on their commitment to anti-racist and anti-colonial practices.

Mergenthal, meanwhile, highlighted the lack of indigenous students on campus.

“The Twin Cities has a very large indigenous population, but, as can be seen in the makeup of Macalester, local populations of color aren’t what is being tapped into by Admissions,” Mergenthal said. “There’s no compelling reason to not promote recruitment locally.”

Even beyond symbology and recruitment, there are steps that Macalester can take to begin to repair its relationship with the indigenous community.

El Colegio, for example, makes its school building available as a space for community organizations to gather and do their work — rooting the school in its community in a different way than Macalester.

“What do the Dakota communities feel their relationship is to Macalester College?” Lozenski asked. “If we were to ask members of those tribal nations what Macalester means to them, I don’t imagine it would mean that much to them.

“We have a really large landholding,” he continued. “What would it mean to be in partnership with indigenous communities around the usage of those lands would be a really great question to ask at an institutional level that would lend credence to the land acknowledgment.”

Mergenthal, who suggested that Macalester consider patriating Ordway Field Station, a site with archaeological evidence of thousands of years of indigenous existence, sounded a similar note.

Other approaches may be programmatic or curricular. Macalester does not have a college historian, nor does it offer a class on the college’s history. There is currently no programming for new students that explores the relationship between Macalester and settler-colonialism.

“I think there are a couple of ways that we could keep [the] conversation going,” Phillips said. “Have a session at orientation that talks about the history of the land Macalester occupies. If you’re going to have that discussion, you need to talk about the Native people. It’s a starting point.”

“On one hand, you could say that it’s a tough conversation to have — but on the other hand, the more you talk about it, finding the solution, whatever that might be, ideally becomes easier,” she continued. “It becomes a collective process.”

Lozenski echoed that point — saying that while the name should be changed, the story of who Neill was and how people have resisted his legacy must still be told.

“Confederate monuments… tell a really important story about the reality of inequity,” Lozenski said. “What I find myself leaning towards are counter-monuments and counter-stories that actually help us complicate things. My question is, where is the story of the resistance?”

“The institutional memory at Macalester is about three years, at best,” Mergenthal said. “If we don’t keep bringing these things up, chronically, no one will remember them.”

The debt Macalester owes to the indegenous people it displaced can never be repaid in full. But there is no shortage of things the college could do to begin making a dent.

“People ask, ‘What can we do?’” Mergenthal said. “Literally anything. We are basically at a standstill in this process.”

Taking Neill’s name off of the Humanities Building is one simple place to start.

“It’s much easier for us to change the building name, and give an accurate portrayal of Edward Neill, than it is to change the name of Ramsey County,” Lozenski said. “It’s a pragmatic victory that we could actually achieve.”

Neill’s name is not etched into the face of the building like Andrew Carnegie’s is on Carnegie Hall. Given that the building was only renamed six years ago, changing the name again seems to be within the realm of possibility.

According to Vice President of Administration and Finance David Wheaton, there is no set protocol for changing the names of campus buildings.

“I suppose that [students interested in changing the name] would write up their request in some form and send it along to the administration, and we’d have to figure out how to process it in a way that is similar to any other requests that we get from people on any other subject,” Wheaton said.

After that, it will be about students, staff, faculty and alumni working collaboratively to raise awareness and pressure.

“Absolutely,” González said. “The name should be changed. I think it’s an opportunity. And that’s what happens with crisis — if you really, really embrace the crisis, you can use it as an opportunity.”