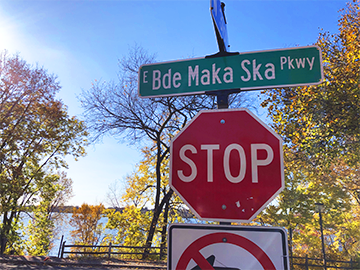 If the Encyclopaedia Britannica is to be believed, the story of Minnesota begins when the first white settlers arrived here in the early 19th century. Others start the story in 1858, when the territory was granted U.S. statehood.

These accounts are hardly the truth. People first came to the land we now call Minnesota during the last ice age, some 9,000 years ago. Before colonists set foot here, this land had already been home to the Dakota and Ojibwe people for hundreds of years.

But as white people violently occupied Minnesota throughout the 1800s, their names began to occupy the land and its features as well.

Today, Minnesotans of all backgrounds are grappling with those names and their histories. In the past several years, name restoration projects have swept through the Twin Cities area — with activists attempting to recover the names of some of the state’s most well-loved and recognizable attractions.

The most well-publicized of these movements is the current fight to restore the name of Bde Maka Ska, which began in earnest in 2011. The lake, the largest in Minneapolis, was named after then-U.S. Secretary of War John C. Calhoun in 1839.

It was in 2011 that critics brought the debate over Calhoun’s legacy as a slave owner and a pro-slavery politician to the Minneapolis Parks and Recreation Board. At the time, the Board decided that it did not possess the authority to change the name of the lake.

In 2015, however, things began to change. After the white supremacist murder of nine black churchgoers at Emmanuel African Methodist Episcopal Church in Charleston prompted further outcry against Calhoun, the city added Bde Maka Ska to city signs, though the lake was still officially known as Lake Calhoun.

What followed was a years-long back-and-forth between various municipal committees over whether the name Bde Maka Ska should be officially restored and over who had the right to take such action.

Finally, in 2018, the United States Board on Geographic Names officially approved the restoration of Bde Maka Ska’s name. The city promptly changed signs to bear only the Dakota name.

This April, however, the Minnesota Court of Appeals overturned that decision — leading the Minnesota Department of Natural Resources to appeal to the Minnesota Supreme Court. As of now, that legal battle continues.

This week, however, the names of city streets around the lake were changed to reflect its Dakota name as Minneapolis began switching signs that said Lake Calhoun Parkway for ones that read Bde Maka Ska Parkway.

The effort to restore Bde Maka Ska’s name was led by Dakota activists and historians like Dr. Kate Beane and her sister Carly Bad Heart Bull, who attended countless public meetings and informed citizens of the lake’s historical importance to the Dakota people.

The activists had political support as well. State Rep. Jamie Becker-Finn (DFL), a descendent of the Leech Lake Band of Ojibwe, has been an outspoken supporter of restoring the Bde Maka Ska name since entering office in 2017.

This has not been Becker-Finn’s first experience with name restoration movements. At Cass Lake-Bena, where she attended high school in northern Minnesota, the student Name Change Committee led the charge in renaming landmarks that had previously been named after derogatory terms for female genitalia. Those places are now called Oak Point and Oak Lake.

For her, restoring Bde Maka Ska’s name is part of a broader resistance against the erasure of indigenous identities and histories.

“All these things matter when we have people who think that Native folks no longer exist,” Becker-Finn said. “When my kids are surrounded by Native women on butter containers and in sports logos… to see Native languages accepted and mainstream in our culture is incredibly important.”

However, opposition to the recovery of indigenous history in the state runs deep.

Many opposing the removal of Calhoun’s name cited practical costs like the price of changing signs.

Others opposed the name change on ideological grounds. In a 2017 column in the Star Tribune, a member of the group Save Lake Calhoun wrote, “What exactly have the Dakota Indians done that is a positive contribution to all Minnesotans? What is the heroism or accomplishment that we are recognizing in order to justify renaming the lake to Bde Maka Ska?”

In 2017, the Minnesota Historical Society (MNHS) added temporary signage that identified the site as Historic Fort Snelling at Bdote — a word they identify as the Dakota term for the place where two waters meet. It refers, in this case, to the confluence of the Mississippi and Minnesota Rivers.

But despite the retaliation, MNHS has continued its effort to add Bdote to the name. Throughout the months of September and October, the society held community meetings around the state on the idea of permanently renaming the site.

On Oct. 14, at a meeting in St. Paul, about a dozen people spoke both in favor and against the change. All were impassioned.

“I’m not that bright, but how is Historic Fort Snelling not inclusive,” Bruce G., a man in a veteran’s cap said. “Other elements are hell-bent on adding something to the name.”

Barry, an 86-year-old Dakota man said he personally didn’t recognize the word Bdote, though he did add he had a “limited knowledge” of Dakota language.

He acknowledged the land as central to Dakota beliefs. Barry said the confluence of the Minnesota and Mississippi Rivers is reminiscent of a man and woman, joining together to form a child.

“This land is holy, where we called home, this was our Eden,” he said.

MNHS will continue the public input process on this issue until Nov. 18.

Ever since criminal defense attorney Barry Edwards moved to the Twin Cities in 1988 for graduate school, something has been “stuck in [his] craw.”

Terminal 1 at Minneapolis-St. Paul International Airport is named after famed aviator Charles Lindbergh, who, in 1927, became the first pilot in history to complete a solo transatlantic flight.

But, as Edwards knows, Lindbergh was far more than a great pilot.

“As a Jew, I had long been aware, as far back as I can remember, of the fact that Lindbergh was at best a Nazi sympathizer or… actually a Nazi,” Edwards said.

Indeed, Lindbergh was outspoken in his opposition to American involvement in World War II. Both he and his wife, Anne Morrow Lindbergh, were avid admirers of Germany and the Nazi regime. In her diary, Anne called Adolf Hitler a “visionary.”

President Franklin Delano Roosevelt, in a 1940 letter to his treasury secretary, wrote, “If I should die tomorrow, I want you to know this, I am absolutely convinced Lindbergh is a Nazi.”

In September, Edwards wrote a letter to the editor of the St. Paul Pioneer Press calling for the terminal to be renamed. He said he was motivated by the popularity of other Twin Cities renaming movements.

“I’d be appeased, at least, with Lindberg, if there was some acknowledgment in the airport of his complicated history,” Edwards said. “I think people… especially kids [who] learn to valorize historical figures need to understand the complexities of their legacies.”

This list of ongoing naming struggles in the Twin Cities does not end here. From buildings on the University of Minnesota campus to Justice Page Middle School in Minneapolis — once known as Alexander Ramsey Middle School — the movement to decolonize Minnesota’s place names is broad and spirited.

For Becker-Finn, this is all coming to a head at a time when the public — especially students — is more aware than ever of the impact naming can have on the way we interpret history.

She only hopes more of her fellow politicians would come to a similar understanding.

“Any time you have a critical mass of members of any given community telling us that something is important to them, we should listen to them,” she said.