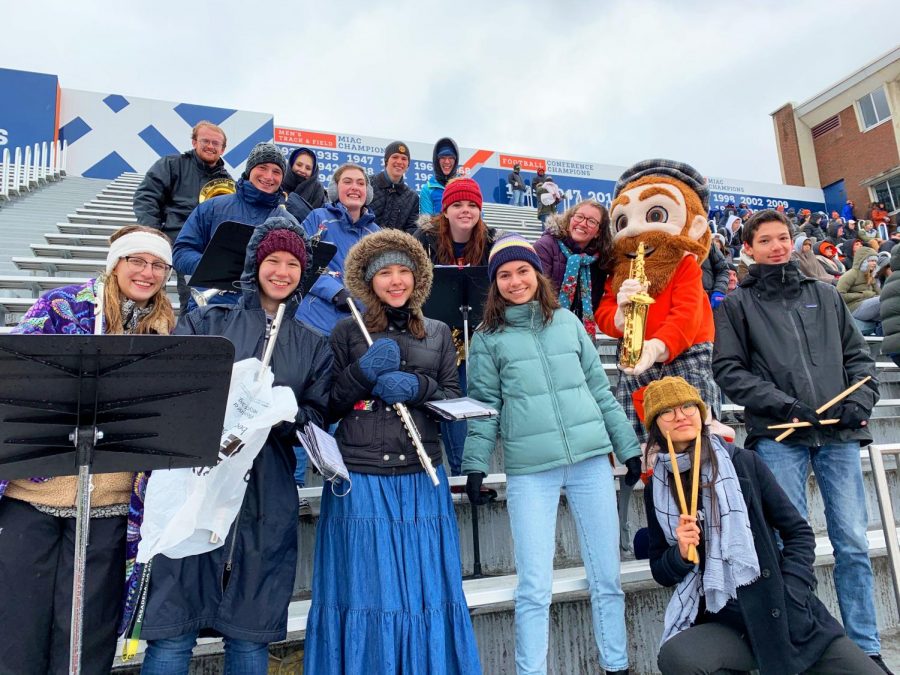 Walking into the alumni gym in the Leonard Center you might think the Macalester versus St. Catherine volleyball game is a regular sporting event, only to be greeted by 15 or so musicians playing “Louie Louie.” No, you didn’t magically teleport into the Music department. You just encountered the newest addition to home sporting events this year: the Macalester Pep Band.

Present at many of this fall’s volleyball and football games, Macalester Pep Band premiered this semester, but has been in the works for a while. Co-chairs and founders of the organization, Jamie Thompson ’21 and Julia Ricks ’22 worked along with McKinley Thompson ’21, who is currently abroad, all through last semester to get the band off the ground.

Both Thompson and Ricks were involved in their high school’s pep bands, and wanted to create a similar community here.

“People coming from high school bands were coming here and thinking, ‘wait where’s the pep band or marching band?’” Ricks said. “There was nothing like that available here. So some of us in jazz band got the idea to just make it happen.”

To become an official organization, they had to create a charter, decide who the leaders were, what their roles would be, how leadership positions would be passed on, and meet all the other requirements MCSG sets for new clubs. However, they had a couple more unique challenges as well — finding musicians and music.

“Outreach took a while, making sure people knew about it,” Ricks said. Once they started talking to people about it, though, they had an interesting advantage.

“Word of mouth has been really helpful because a lot of the musicians here know each other, no matter in what capacity they play, not just in an ensemble,” Thompson added.

As for music, their previous pep band experience really came in handy.

“We’ve been really lucky to have access to a lot of music through some former directors,” Thompson said. “That’s been nice because we have a big repertoire to choose from and a lot of fun options”

The band has fast-paced rehearsals about once a week. The rehearsals act more as an opportunity to try out new music than to practice an exact set.

“When we rehearse, we’ll run through each song a few times to figure out which ones we like and which ones we don’t like,” Ricks said.

“A lot of the songs we play are arrangements of popular songs,” Thompson said. “And so sometimes we love the arrangement and the way the composer has put it on paper and sometimes we decide not to play it or to find a different version.”

That decision is usually made by the band, in a vote, and then removed from their repertoire.

The speedy process is only made possible by the musicians.

“We don’t get a lot of time on each song because we like to keep things fresh,” Thompson said. “So it’s nice to have people who are willing and able to sight-read quickly and have fun.”

“It’s a great group of people, people who can really play their instruments.” Ricks added. “They’re musicians and it’s easy to pull things together and do things really well the first time.”

The student-led structure, peppy music and fast rehearsal process create an environment that sets Macalester Pep apart from other groups.

“Pep band songs are so fun,” Thompson explained. “Nowhere else do you get to play this type of music, and the atmosphere when you’re playing is part of the reason you’re there — to pump things up and make people have a good time.

“We’re an org that wants to provide a space for musicians to play this kind of music and be less of a time commitment than other ensembles, but also part of our mission is to support student athletes and create a fun environment for everyone,” Thompson said.

They aren’t just hoping that the fans have a good time — they want the athletes to get involved too.

“The football team was really excited about us playing at their games, which makes us happy.” Ricks said. “We have a really good relationship with athletics.”

While pep bands usually happen during football and basketball, Ricks and Thompson want to play for even more sports teams.

“We wanted to support athletes at all types of events,” Thompson said. “But some sports are more conducive to pep band. We thought about doing soccer, but it’s fast paced and there aren’t a lot of breaks. In football, they’re constantly on and off the field so we can play then. Volleyball and basketball have more time outs too.”

As the football and volleyball seasons are coming to an end soon, Macalester Pep Band is looking at which men’s and women’s basketball games they will attend.

The musicians recognize the impact of what they’re doing as well.

“I like pep band because it adds energy to these events and really makes the Macalester fans feel more involved,” Katie McCarthy ’22, an alto saxophonist playing at the volleyball game, said.

The next Macalester Pep Band performance will be at the football game on Nov. 4, so you can check them out and support your student athletes while you’re at it. Additionally, Macalester Pep Band is always looking for new musicians. If you would like to join, email them at [email protected]