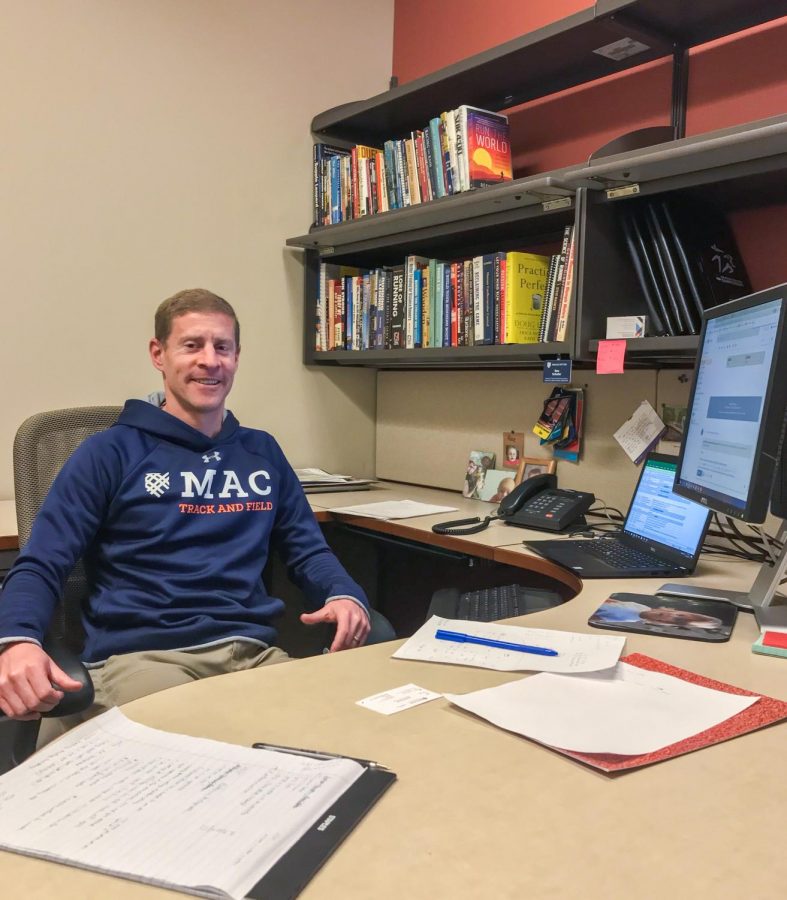 Coach Dan Schofer pictured in his office. He is the new Head Women’s Cross Country Coach and Director of Track and Field. Photo by George Steinke ’22.

New Head Women’s Cross Country Coach and Director of Track and Field Dan Schofer is no stranger to the MIAC.

His involvement in Division III athletics began with four years of running for Carleton College, a fellow MIAC competitor. It only seems natural, then, that his coaching career would bring him back to the conference in which he started.

“My experience as a student-athlete at Carleton shaped my coaching career. I loved going to school and being on the team, and as I left college, I wanted to find a way to continue to be a part of it and ultimately help build a positive, healthy and competitive team,” Schofer wrote in an email to The Mac Weekly.

Now, after 13 years of coaching experience, Coach Schofer hopes to make another mark on the conference as the Director of Track and Field and Head Women’s Cross Country Coach at Macalester.

Schofer began his coaching career as an assistant Men’s and Women’s Cross Country and Track and Field coach at Rhodes College in Memphis, Tennessee.

These teams combined  to record several All-American performances, individual conference championships and All-Conference honors during Schofer’s four years. He also briefly held positions at both his alma mater, Carleton, and the University of Oregon, where he held an assistant coaching and teaching assistant position, respectively. Schofer also earned a Master’s degree in exercise physiology at Oregon.

After holding these three positions, Schofer moved on to his longest-held to date, a 13 year run at Cornell College as Head Coach of Men’s and Women’s Cross Country, during that span, he spent seven years as the Director of Men’s and Women’s Track and Field. This led to a huge shift in the programs’ trajectory; Schofer led the Cross Country teams to three Midwest Conference championships, as well as 11 top-three conferences finishes in the conference for the Track and Field teams. In addition to team accomplishments, Schofer coached individuals to numerous individual records, conference titles, national qualifications and even individual national championships in track and cross country.

Schofer had a lot to reflect on in his transition to his new position at Macalester.

“Cornell and Iowa were fantastic for me and my family, so we didn’t take the decision to make this move lightly,” he wrote. “It is certainly a change leaving behind a department where I was one of the more senior members to one in which I am the newcomer.”

As always, a shift in leadership certainly has its hurdles. “The short term challenge for me is to learn how things work at Macalester and connect with our student-athletes,” Schofer wrote. “I certainly don’t plan to come in with a wrecking ball and then start from scratch.”

Schofer says he hasn’t had difficulty finding a home at Macalester thus far.

“The transition during these past three months has been fairly smooth,” he wrote.

Schofer set forth some clear goals for both team culture and competition.

“I hope to help lead our cross country and track and field teams to greater success while maximizing the enjoyment of our team members,” Schofer wrote. “I love to win, and even more, I love the process of getting better every day and every season. I expect we will have winning teams here at the conference level and beyond.”

Women’s Cross Country team member Lydia Simpson ’20 spent three years on the team under the tenure of previous coach Betsy Emerson and has noted some of the differences in the personnel shift.

“Change is hard, it’s always difficult, but Coach Schofer has been fantastic and really receptive to all of our traditions and all of our needs,” Simpson said.

Coach Schofer’s new program has made changes to the pace of practice for the team.

“Our program in the past has been more about going really hard in workouts and then really recovering, but the program now is harder all the time,” Simpson said. “I think that’s really paid off.”

At Macalester, Schofer has wasted no time finding the same high-achieving student-athlete mentality that helped guide him into a coaching career.

“You don’t have to be here long to see how amazing our student-athletes are. They are highly driven and high achieving students who also care deeply about their teams and teammates, and on top of that, they want to go out and change the world. How can you not be inspired by that?” he wrote.

Now at Macalester, Schofer is ready to stake his claim as a head coach in the MIAC.

“Of course I love Carleton, and I don’t think it’s a contradiction to say that my connection there only increases my desire to beat them on the track and on the cross country course,” Schofer wrote.

“How good is the student-athlete experience if we never win?”