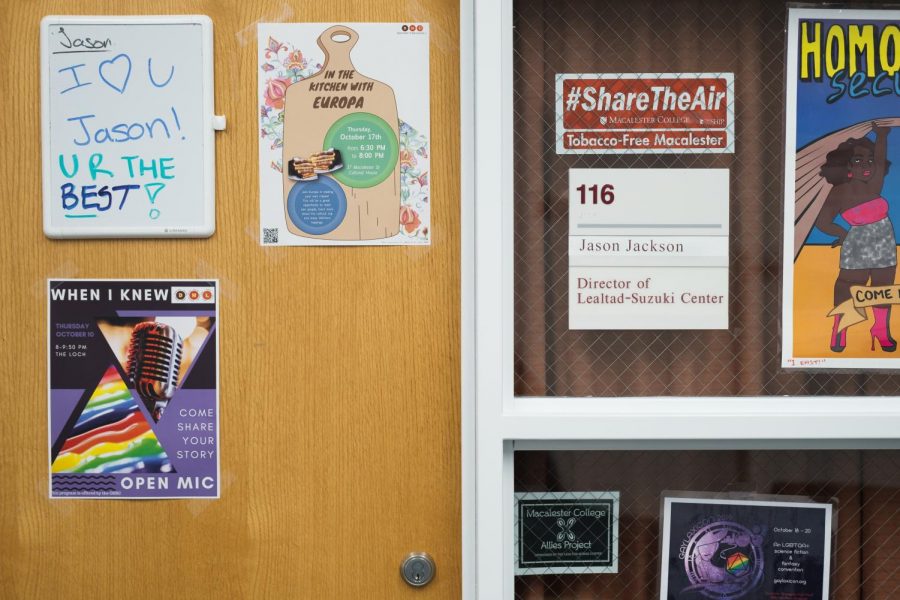 Director of the Lealtad-Suzuki Center Jason Jackson has left Macalester — depriving the Department of Multicultural Life (DML) of one of its most recognizable faces midway through the fall semester.

Jackson’s departure was relatively sudden. One student employee in the DML said that they were “shocked” by the news, while a staff member said that it was a “huge surprise.”

“He said it was one of the hardest decisions he’s had to make,” DML student worker Emma Curtis ’21 said. “But [that] it was necessary for his well-being.”

Jackson has taken another job, outside of higher education, working as a diversity and inclusion consultant for HealthPartners — a large health insurance and care provider headquartered in Bloomington.

Jackson declined to be interviewed for this story, but wrote in an email to The Mac Weekly that “I cherished the work I did that focused on campus climate change, as well as student leadership and development.

“I can only hope that I had a long lasting & positive impact on the campus and work of Social Justice,” he continued. “The Macalester community will always hold a special place in my heart.”

Though Jackson was publicly vague about his reasons for departing, multiple sources told The Mac Weekly that he was struggling in the months leading up to his departure with the job’s considerable demands on his time and energy.

Dating back to the last spring, he had also voiced his frustration with his role as a member of the college’s Crisis Response Team (CRT) — a group of student affairs personnel required to alternate weeks “on call.”

When on call, group members are required to stand ready  to attend to student health emergencies at any and all hours.

Assistant Dean for College Access, Retention, and Success Sedric McClure, who is also a member of the CRT, described those on-call weeks as “daunting… physically and emotionally.”

Jackson’s departure was announced in the Mac Daily on Oct. 4. The DML hosted a farewell reception for Jackson in The Loch four days later; his last day at the college was Oct. 9, just one day prior to the commencement of an International Roundtable he helped plan.

Given the timing of his departure, Jackson’s position will not be filled until the start of the 2020-2021 academic year — meaning that the Lealtad-Suzuki Center (LSC), the three-person programming wing of the DML, will be short-staffed for the foreseeable future.

Dean of Multicultural Life Marjorie Trueblood and Assistant Director of the LSC Tegra Myanna will assume a number of Jackson’s responsibilities for the time being, but know that the DML may have to pare back its programming in particular areas as long as Jackson’s position remains vacant.

“I’m hoping we can honor most of the commitments we’ve made for this semester to staff and faculty,” Trueblood said, “but, moving into the spring semester, we might need to be more discerning in terms of how we are prioritizing our time to center our work on the student experience.”

Trueblood, who will lead the search committee responsible for selecting Jackson’s replacement, said that the DML will discuss the parameters of the search and how it wants to structure the position moving forward during a departmental retreat over winter break.

That new director, whoever it is and whenever they arrive, will have big shoes to fill.

Jackson arrived at Macalester from the University of Minnesota in August of 2017, and hit the ground running — working with students to develop the new Power, Oppression and Privilege (POP) trainings for first-years and expanding the DML’s reach across campus during a period of transition for the department.

Maybe more than anything else, however, Jackson — who came to Macalester with years of experience organizing in the Twin Cities’ queer people of color community — made his mark as a mentor for students.

It was an interview with Jackson, for instance, that sold Curtis on working at the DML last spring.

“I applied for the DML not really knowing what the job was going to look like, and I didn’t know a lot about what the DML did,” Curtis said. “But I had my second interview with Jason, and after that conversation, I remember feeling so excited for this job.

“I remember leaving feeling really excited about making a difference on campus, providing support for marginalized students and creating spaces where Macalester’s mission of multiculturalism can actually come into place,” they continued.

“Jason has a particular gift of connecting with people,” McClure said. “I think Jason was able to model in many ways the skill of being vulnerable and authentic, honest and supportive. He was willing to speak to some truths.

“People were hungry for that kind of expression,” he continued, “and I think that’s why many gravitated to Jason.”

“I felt like I could really open up to him, and be honest, and having honest conversations — which is rare, especially in professional relationships. But I think that he always… wanted to cut the bullshit and be real,” they said. “That’s how you get down to what you really want to say.”

“He meant a real sense of connection and belonging to a lot of folks on campus,” Myanna said. “He was, and is, really good at holding community that allowed you to bring in how you are actually feeling.”

Endemic to that ability was Jackson’s unwillingness to shy away from who he was — whatever the setting.

“He was very proud of his identities, and he showed that,” Curtis said. “Having that representation is so important, and it really made a lot of the work that he was doing more valid in a way for students.”

That representation of identity was particularly impactful for certain students. McClure, for one, noted that his working alongside Jackson gave students “multiple examples of what it means to be a black male.”

“It’s really important for students with marginalized identities to find mentorship, and it’s hard,” Curtis said. “There aren’t as many people in power that represent different identity groups as there should be.”

Over the last two-plus years, students and other staff and faculty members responded to Jackson’s authenticity and tenacity. Nearly 100 people attended his going-away party, which was held with just several days’ notice on a Tuesday afternoon.

Jackson, in many ways, reciprocated that love and appreciation.

“I walked into his office and saw 15 or 20 gift bags on the ground, and I said, ‘are these for you?’ And he was like ‘no, I bought these for students,’” Curtis said. “He bought personalized gifts for certain students who really made an impact on him… which I thought was incredible.”

Losing Jackson’s presence on campus so suddenly has been a blow for students and staff members alike.

Alice Pham ’22, who works as a program assistant in the DML, received Jackson’s email announcing his departure during a biology lab – giving her more time than many had to say goodbye.

“I still saw him from time to time, and most of that time I tried to hug him as much as I could,” Pham said. “Until the very end, he kept it very positive.”

“I think that Jason will be irreplaceable in many ways,” Curtis said. “There are other people on campus and in the DML who do hold that passion, but not quite in the same way. There’s something about all of the emotion that he pours into what he does that really is impactful.”

“It’s really rare to find someone like that, who cares so much about what they’re doing.”

Trueblood and McClure, with their combined decades of experience in the field, both commented on the toll doing diversity and inclusion work in higher education can exact.

“When we lose people who come from underrepresented backgrounds, I acutely feel that,” Trueblood said. “My hope is that we can have a climate or community where people have a sense of belonging and can be well and successful.

“For so long, the push has been to get people in the door through recruiting efforts,” she continued, “but nobody has found the magic formula to actually figure out how we can create environments where people from underrepresented backgrounds are thriving.”

“I often tease that we age in dog years,” McClure said. “It’s really spiritual to watch students come in as first years… and it is taxing. You have to live in the highs of the highs and the lows of the lows, and try to find that space in between.”

McClure said that he would not be surprised if Jackson finds his way back to work in higher education at some point down the road. Whatever happens next, though, Jackson’s impact at Macalester will reverberate in the years to come.

“I was pretty upset that he was leaving and very shocked, because it was so sudden, but that’s a very Jason way to go out,” Curtis said. “With a bang. Dramatically. And throw a huge party, and make some noise. And that’s what he did.”