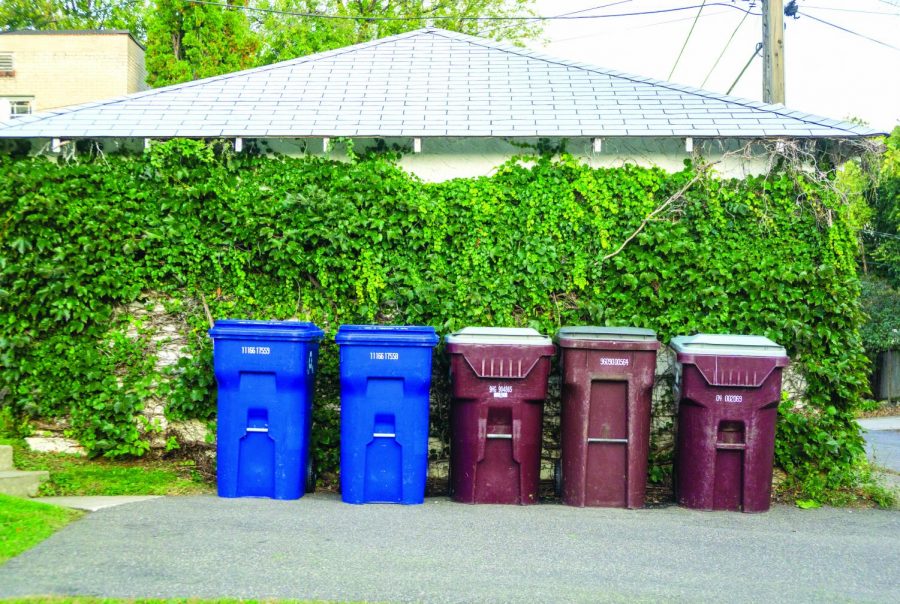 On Tuesday, Nov. 5, citizens of St. Paul will vote on a referendum regarding the city’s system of coordinated trash collection that has attracted widespread public scrutiny over the past year. The journey to the current trash policy — where the municipality provides city-wide trash collection services financed with a quarterly fee — was a long one.

State law mandates that cities must establish regulations regarding trash collection: A city can either implement a coordinated city-wide program, or allow individuals to hire private trash services. Prior to October of 2018, St. Paul residents hired their own garbage collectors.

The policy changed in November of 2017 when St. Paul City Council passed Ordinance 18-39.

“This has been on the policy agenda in St. Paul for a while,” geography professor Dan Trudeau said. “In the past twenty years there’s actually been more regulation to the private waste haulers prior to this.”

Trudeau was a resident of the city until recently, and saw the transition to coordinated trash collection unfold.

The ordinance was the final step toward widespread coordinated trash collection. It established trash pickup schedules, fixed household rates and decided which collection companies would cover sectors of the city.

In October of 2018, after months of planning, 18-39 went into effect and the city entered a five-year contract with a consortium of trash collectors.

Since then, residents of St. Paul — including Macalester— have adjusted to the new policy.

Previously, the college hired one trash hauler, Aspen Waste. Unlike most residential properties, though, the college falls on the border of the three haulers.

Now, Macalester has three additional trash haulers: Highland Sanitation, Waste Management and Republic Services. According to custodial supervisor Kyle Wright, the transition has proved difficult at times. Disputes over billing, and which service covered the Language Houses, took months to sort out.

Previously, neighbors that produced little waste could share trash cans as a cost-saving method. Now, each resident is mandated to have their own.

“There was variation in the haulers,” Trudeau said. “Some of them were all about low cost, and others were all about the ethic of waste disposal. To some extent, there was more ability for people to opt-in to a system that reflected their values. With the removal of that, it was problematic.”

Proponents of Ordinance 18-39 argue it is more environmentally friendly. Under coordinated collection, fewer vehicles are out wearing the roads, using fuel and emitting pollution.

“If you are on a block that has an alley where your waste would be picked up, it was quite frequent that you would have trash haulers going through that alley five days a week,” Trudeau said. “With that increased traffic of much higher weight vehicles, it puts added wear and tear on roads that weren’t built for that. There ended up being an unanticipated costs.”

By mid October, however, the opponents to coordinated trash collection mobilized. Over 6,400 city dwellers petitioned, advocating that the trash program appear as a referendum on the November ballot.

“The referendum is meant to have those voters in the community express their interest on an issue,” Trudeau said. “One where there is a lack of unanimity about what to do in an important policy issue. The other is this situation where the elected leadership goes one way and citizens go another.”

When city leaders denied the request for a referendum, a group of activists — St. Paul Trash — raised over $15,000 to finance a lawsuit in Ramsey County District Court against the city.

In May, the District Court judge found in favor of St. Paul Trash.

The city appealed the decision, and the issue went to the Minnesota State Supreme Court in August. After two days of oral arguments, the court again found in favor of the activists. The issue would appear on the Nov. 5 ballot in 2019.

Jack Acomb ’22 is the Macalester representative on the Union Park District Council. Although “Vote No” signs occupy many lawns in the council’s jurisdiction, the issue of coordinated trash collection hasn’t made it to the council chamber.

“During my tenure, the trash collection in St. Paul has not been a primary focus,” Acomb said. “The specifics of trash collection, both when it was switched over to centralization, and now the referendum, hasn’t been a topic.

“It’s surprising that it hasn’t come through Union Park,” Acomb said. “At least, in some part, that speaks to the responsiveness on the city’s part. If people feel like progress is being made at the city level without mobilizing district councils, then that might explain why they haven’t come to us.”

Many members of city councils believe that if Ordinance 18-39 is repealed, the city will still be culpable for the cost of the remaining five-year contract with trash collectors, roughly $27.1 million.

On Sept. 25, the city council approved a 22 percent increase limit on the 2020 property tax levy to cover the cost. The Minnesota State Supreme Court has since affirmed this belief — the city has to honor the contract no matter what the voters decide.

For ISAIAH, a multi-faith, multi-racial, non-partisan organization that works collectively toward racial and economic justice in Minnesota, this potential cost to the city is concerning.

“One of the negative consequences of working to end organized trash collection in St. Paul is that the city is planning to be on the hook for the contract,” ISAIAH St. Paul organizer Vivian Ihekoronye ’13 said. “If we have our collective resources being used to pay for a trash contract, we are not setting ourselves up to address racial and economic justice as powerfully and strategically as possible.”

ISAIAH is spending the weeks leading up to the election connecting with St. Paul voters.

“The Muslim base in St. Paul has been doing a lot of door knocking in the past week, talking to Muslim folks in St. Paul about how the ballot referendum on trash can be a threat to issues that they want to work on,” Ihekoronye said. “We also have leaders that are writing letters to the editor to shape the public conversation about this issue, in addition to posting on social media.”

The response from residents has been mixed.

“One thing that is clear about this issue is that there are some people that are against having organized trash for a whole host of reasons,” Ihekoronye said. “The conversation prior to our engagement was very focused on the reality of organized trash collection on the individual, rather than it being about actually advancing our vision for St. Paul and what’s possible together.”

The door knockers have had some positive engagement as well.

“What we’re also hearing from people is that they enjoy having one truck drive in their neighborhood once a week,” Ihekoronye said.  “There are people who are excited that St. Paul is taking a bold step in aggressively fighting climate change by reducing the number of trucks on the road.”

Even on an issue as seemingly innocuous as trash collection, Ihekoronye believes Ordinance 18-39 is worth fighting for.

“I see this trash issue as an opportunity for how government can be about all of us and really driv[e] toward equity on multiple fronts,” Ihekoronye said. “In the next five, ten, fifteen, twenty years, we can look back and say that because of our courage and willingness to work together [we] created the conditions for us to be aggressive around climate change and use this as an opportunity to make sure that our democracy can be for everybody.”