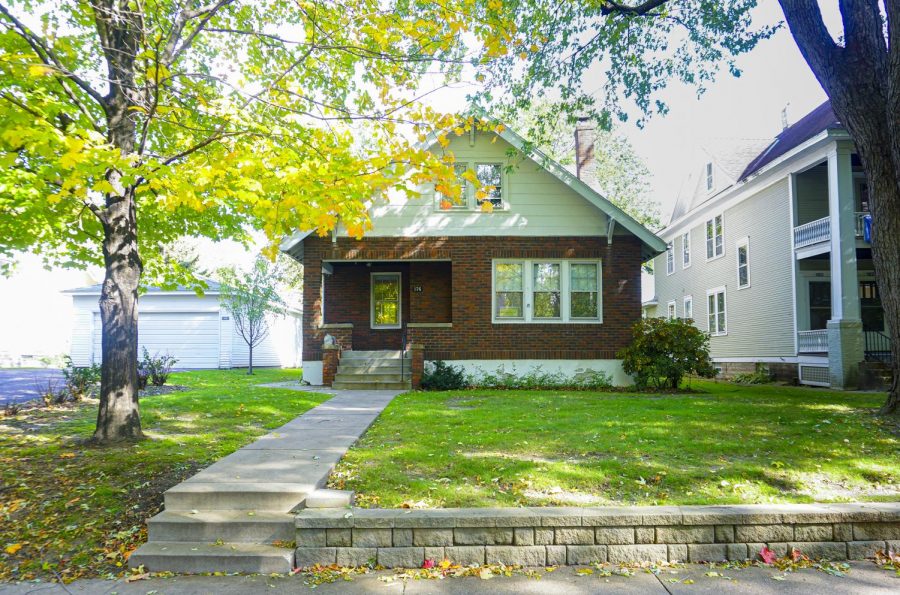 The Arabic house is one of Macalester’s seven language houses. Language houses at Macalester provide student residents with cultural and linguistic immersion. Photo by Smith Mayse ’22.

In the weeks before she returned for her second year at Macalester, Kaitie Brown ’22 started to get nervous. She had been accepted to live in the Spanish house, one of the seven language houses provided by the foreign language departments. Yet as Brown prepared for move-in she remembers thinking, “I don’t know if I can do it. I don’t know if my Spanish is good enough.”

Living in Macalester’s language houses can be intimidating. The seven houses lining Princeton and Vernon streets encourage complete cultural and linguistic immersion among their residents. Interested students apply within their foreign language department to live in the house and, once accepted, join a community committed to fully engaging with their chosen language.

Despite her initial concerns, Brown came to appreciate living in the Spanish house.

“It’s probably been one of the best parts of my Macalester experience,” she reflected.

Marie Thomas, one of Macalester’s French language lab instructors and resident supervisor of the French house, said that the language house program is particularly helpful for students preparing for a semester abroad in a country of their chosen language.

“It’s an easy way to adapt to the life of a French-speaking country,” Thomas said of the French house.

According to Thomas, the house is also helpful for study away returnees.

“When you come back from a study away program, it’s kind of hard to go back to your routine,” Thomas said. “Although it’s home, it’s hard. You need to adapt.”

Much of the language house community-building centers on gathering residents around a common meal. The Spanish house meets every Tuesday to share a dinner cooked by two residents.

In addition to becoming more comfortable speaking Spanish in a group setting, Brown found that these meals are opportunities to learn about the cultural foods of Spanish speaking countries, like paella and tortilla de patatas.

The French house gathers for a common meal every Sunday night. According to Thomas, these dinners are important in helping the residents familiarize themselves with conversational French as opposed to the structured curriculum of classes.

“In class, usually you need to think about your answer, because it has to be elaborate,” Thomas explained. “The topics you discussed in class can be difficult sometimes.”

Brown was initially challenged by this change from the classroom setting to a more immersive style of language learning. As she gained confidence among the Spanish house community however, Brown became more fluent.

“At first it was a little bit more difficult for me just because the environment was different than what I’m used to: speaking Spanish in a classroom as opposed to just speaking Spanish in your everyday life,” Brown said. “You don’t realize how many intricate words and experiences that you don’t know.

“It is getting progressively easier… I noticed that my Spanish skills have also improved.

“You don’t realize that just listening to people speaking Spanish all the time, actually has an effect on you,” she added.

Thomas said that by familiarizing language house residents in this way, she hopes to help them understand the true French lifestyle. She aims to “drop the curtain of French culture.”

“I feel like in the United States, French culture is seen as so fancy and kind of unreachable,” Thomas said. “I want the students to see me, people who are French and who are genuine, not just about clichés.”

Brown appreciates a similar mentality of acceptance and curiosity in the Spanish house.

Brown is pursuing a Spanish minor and hopes to study abroad in a Spanish speaking country for a semester during her junior year.