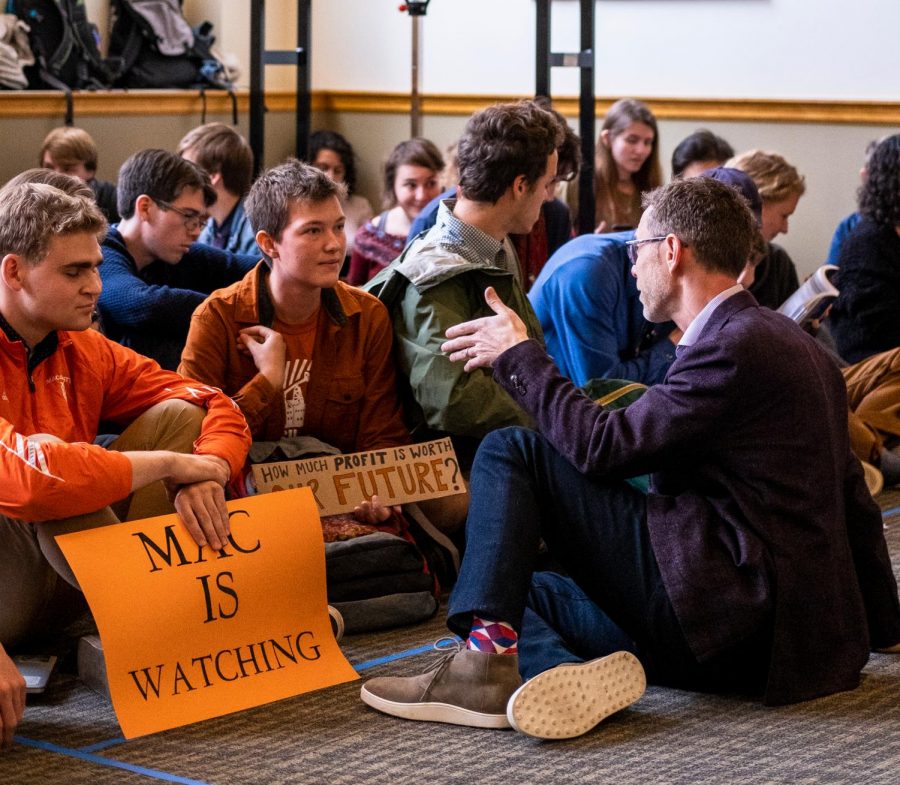 Member of the Board of Trustees Seth Levine ’94 speaks with students at the Fossil Free Mac sit-in on Friday, Oct. 4. Photo by Kori Suzuki ’21.

In a long-awaited vote on Oct. 4, the Macalester Board of Trustees moved to ban all future investment in fossil fuel companies. But this move came with a catch: the college will still be able to invest in oil and gas companies if the investments are “reasonably likely” to result in a net decrease in carbon emissions.

For the student organization Fossil Free Macalester (FFM), the decision appears to be a mixed bag.

“As an organization we’re trying to figure out if this is a victory,” FFM core member Sasha Lewis-Norelle ’21 said.

In addition to their decision regarding direct investments, the board also announced its intention to take a wide-ranging set of actions designed to decrease emissions and affirm the college’s commitment to sustainability.

The board’s engagement on sustainability issues came in response to a proposal put forward by FFM, which has been advocating for restrictions on fossil fuel investment for seven years.

Their most recent proposal, the one they presented to the board earlier this year, asked specifically for the college to place a moratorium on their current partnerships with fossil fuel companies.

But the addendum complicated what FFM might have seen as a moment of great progress.

Members of the organization are concerned that the addendum will compromise the intent of their original proposal. The specifics of the board’s exception are unclear. The board did not specify how it will determine when an investment will result in a net reduction in emissions.

“It depends on the scale of this,” Lewis-Norelle said. “There’s so much that is just speculation right now. If the [college] were to still have millions of dollars invested in natural gas and be like ‘Oh, but it’s better than coal,’ we would definitely take issue with that.”

Since its inception, FFM’s goal has been divestment. Now, the future of the organization is up in the air.

“If [the addendum] is serious, we’ll probably do like another campaign trying to get rid of that,” Lewis-Norelle said, “But if it’s not serious, there has been discussion of focusing more on pipeline resistance and the fight against Line 3.”

The board sees the addendum as a way to invest in attempts to reduce greenhouse gas emissions.

“If you look at India or China, they’re bringing coal burning plants online at a record level,” President Brian Rosenberg said. “This is not something that we are actively considering, but let’s say in the future someone came to us and said ‘we have a partnership that would allow us to convert coal burning plants to natural gas.’ Why wouldn’t we do that?”

The addendum wasn’t the only change to FFM’s original proposal. The board also committed Macalester to joining Climate Action 100+ — a group of investors that advocates for policy change rather than divestment.

According to Rosenberg, this decision signals the board’s commitment to working with corporations on climate change initiatives.

“Simply banning [fossil fuel investments], while it seems simpler and a lot of people like the symbolic impact of it, raises the possibility that we’d miss some opportunities to have an actual concrete impact,” Rosenberg said.

FFM members are not convinced.

“We would push more folks to do their own research on what [Climate Action 100+] is,” FFM core member Roan Childress ’21 said. “Based on the small amount of research we’ve done, it doesn’t seem like it actually represents the ask that we made.”

At this point, Macalester mainly sees its engagement with the group as a signal.

“It’s also fair to say that our participation in Climate Action 100+ is going to be mostly symbolic because we’re so tiny,” Rosenberg said. “But I think we’re much better off having a seat at that table than just saying we’re just not going to participate.”

Regardless of whether the board’s decision is a tangible realization of FFM’s goals or not, Childress and Lewis-Norelle see the student engagement with the board as a win — and pointed to the FFM-run sit-in during last week’s board meeting as an example.

“I think the sit-in where the trustees were stopping and talking to people to me is like the biggest win in all of this,” Childress said.

Interactions between board members and students at the sit-in were aided by the atmosphere, where members of FFM urged the crowd to stay quiet during the board’s meeting.

“The sit-in itself was extraordinary,” Rosenberg said, “Not just the number, but the passion and peacefulness of it made a powerful impact on the board. I do think it was a model for ongoing student activism.”

Over the last several years, FFM’s methods have managed to capture the board’s attention.

“The board spent more time on these issues over the last two years than anything else,” Rosenberg said. “They certainly got the board’s attention.”

With FFM proving that student activists can get the ear of the board, it is possible that other student causes might follow their model to try to bring about change.

“This level of engagement with the board of trustees is pretty much unprecedented.” Lewis-Norelle said. “There are plenty of other orgs on campus that can really use that.”

FFM’s success might also have an influence beyond Macalester, helping to set a precedent for peer institutions.

“I talked to someone from Divest Carleton who said their Administration has admitted that they aren’t gonna be the first ones to divest within our peer institutions,,” Lewis-Norelle said.. “Things like Macalester divesting will have an impact there.”

While FFM may feel that their proposal was altered, the board made sure to affirm its dedication to sustainability and their attention to the desires of students.

“I would say that, while the decision was a bit jarring for some, and a bit confusing for some as well,” Student Liaison to the board Ximena Silva-Avila ’20 said, “There has been a cultural shift in the investment committee towards more socially responsible investments.”

However, the depth of the board’s commitment to sustainability remains to be seen.

“We have a bunch of questions before we can actually know that for sure,” Childress said. “There are just so many unanswered questions around what this actually looks like.”