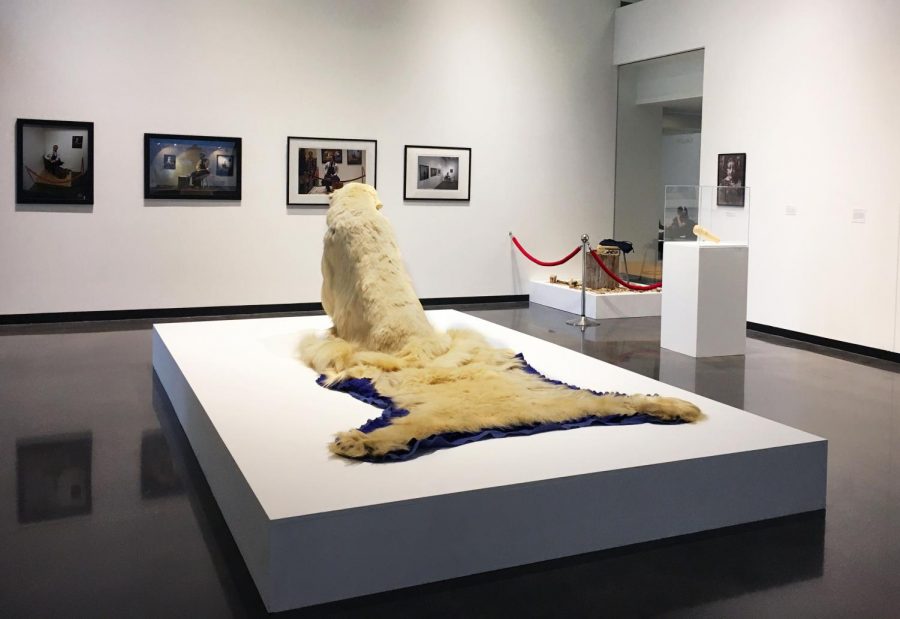 “Everything We’ve Ever Been, Everything We Are Right Now” in The Law Warschaw Gallery. Photo by Jehra Patrick.

It’s hard to sum up Nicholas Galanin’s exhibit “Everything We’ve Ever Been, Everything We Are Right Now”. The Law Warschaw Gallery is filled with sculptures, painting, video screens, audio recording, film projections and photography. The themes range from blood quantum laws, to police violence and cultural appropriation.

“What struck me the most was the diversity of mediums and the breadth of topics, and yet how cohesive it [is],” Anjali Moore ’22, who visited the exhibit during the opening reception, said.

Despite variety, the artwork in the gallery is united by resisting “romanticization, categorization and limitation.” Galanin, who is of Tlingit and Unangax descent, uses a raw and sometimes brutally sarcastic tone in his work. In response to the phrase “kill the Indian, save the man,” Galanin films himself destroying Tlingit masks made by non-Native people for non-Native people. He then glues the wood shavings back together, to recreate a mask-like shape that resembles nothing of a face. The critique is two-fold; the destroyed masks represent the erasure of indigenous people as well as the exploitation of their culture and artwork. Audience discomfort, especially that of non-Indigenous visitors, seems to be welcomed.

“I use my work to explore adaptation, resilience, survival, active cultural amnesia, dream, memory, cultural resurgence, connection to and disconnection from the land,” Galanin said in his artist statement.

The exhibit made its way to Macalester in a process that included many conversations between Galanin and Jehra Patrick, the Law Warschaw curator and gallery director.

“I reached out to Nicholas about a year and a half ago to start a conversation about the possibility of showing with Macalester,” Patrick said. “It’s important for me to develop relationships with the artists that I work with and that our exhibition process be collaborative.”

Patrick sees the value in showing Galanin’s art at Macalester not only because of his national influence — he was invited to the 2019 Whitney Biennial, the Whitney Museum of American Art’s prominent annual art exhibition — but also because of the interdisciplinary nature of his artwork.

Moore visited the exhibit for a second time with her Radical Reelism: Indigeneity, Politics and Visual Culture class to speak with Galanin. She found that the exhibit fit the curriculum of her class perfectly well, and supplemented their discussions about Indigenous reclaiming of visual art.

On a personal level, Moore felt drawn to Galanin’s piece that critiqued police brutality towards Indigenous people. The piece My Ears are Numb is an American flag stretched across a drum with a police baton carved out of wood. Neighboring the drum is a piece called How Bout Those Mariners, a screen plays the image of a Tlingit man walking and holding a knife, with the police audio of the shooting of John T. Williams playing through a pair of headphones. Because Moore is active in anti-police brutality protests, she was inspired by these pieces to make her own activist art.

The topics explored in “Everything We’ve Ever Been, Everything We Are Right Now” are not easy ones to discuss, but the dialogue that Galanin’s artwork provokes is more than necessary, especially at a college that was built on stolen indigenous land. The artist makes statements which add to the narrative of the exhibit and allow Galanin to explain his process. In doing so, there is less room to approach the gallery with a sense of comfortable distance that can be so common in academia. Instead, gallery-goers must confront undeniable truths about indigeneity.

“Nicholas Galanin is an important artist of our time,” Patrick said. “Go see the show because the work is conversation-worthy and this is an artist who is changing the field for the better.”

“Everything We’ve Ever Been, Everything We Are Right Now” will be at the Law Warschaw Gallery through Dec. 8.