After son’s scare, McClure campaigns for awareness of vaping effects 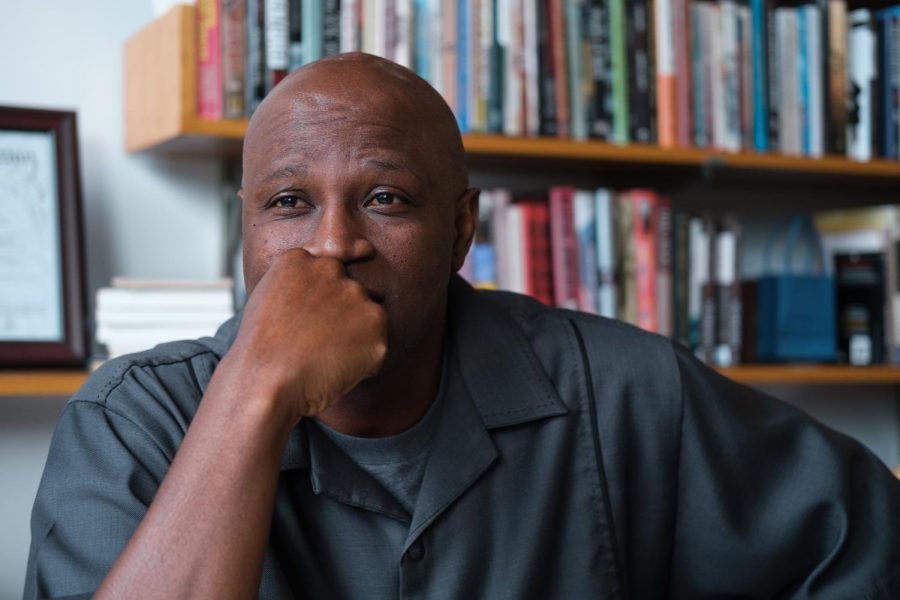 On Tuesday, Sept. 3, the first day of school, Assistant Dean for College Access, Retention and Success Sedric McClure was in North Memorial Health Hospital in Robbinsdale. His son, Elijah, laid in a hospital bed, sedated and breathing on a respirator.

In the preceding days, Elijah was in and out of urgent care and Brooklyn Park Hospital before making his way to North Memorial’s ICU after experiencing chest pain, nausea and shortness of breath on Aug. 29.

When Elijah first started experiencing symptoms, his father assumed that he was looking at a more typical diagnosis.

“All of the symptoms looked like it was the flu,” McClure said. “It was vomiting, it was a headache, it was night sweats and the fever kept spiking. The night he was admitted [and] they put him on the respirator, he had a 103 temperature. And couldn’t eat — he literally couldn’t retain a tablespoon of water.”

At the hospital, however, doctors did not detect any sort of bacterial or viral infection. Eventually, McClure realized that the symptoms  were likely linked to his son’s regular use of electronic cigarettes, a habit he developed a couple years ago.

“Once the doctors began to ask about lifestyle… we found out that he was still vaping at the level that he was,” McClure said.

After weeks of anguish, Elijah finally came off of the respirator on Sept. 12 and was sent home the following Saturday. He left with a diagnosis of Acute Respiratory Distress Syndrome, pneumonia and pulmonary scarring. His doctors could not say with certainty what caused his illness, but suspected his vaping habit to be at the root of the issue.

“When we were leaving, the doctor said ‘Elijah, you have had a non-infectious infiltration or injury to your lungs due to something you have inhaled. We don’t know exactly what it is, but we believe it is associated with vaping,’” McClure said.

McClure first learned about his son’s vaping habit when Elijah was in high school.

“In high school… we kind of came down pretty hard on him in terms of having a zero-tolerance policy,” McClure said. “I still regret to this day that I hadn’t known more about what one was doing to their body when they were vaping.”

Doctors still don’t fully understand the extent of vaping’s consequences. A letter published in the New England Journal of Medicine called the spread of vaping-related pulmonary illness over the last few months an epidemic due to its exponential growth.

Biology professor Robin Shields-Cutler said that at the moment, vaping injuries are unlike any other treatable illness.

“It’s just like a big puzzle right now with the e-cigarettes because… we don’t have that clear chain to track down a particular product or blend,” Shields-Cutler said.

Data from the Laurie Hamre Center for Health and Wellness revealed that Macalester students are not strangers to e-cigarettes. The data show that between 2017 and 2019 there was a 6.5 percent increase in students who had vaped in the past 30 days.

“At this point, much of our role is educational, but like all health care providers, we are getting frequent updates from the Minnesota Department of Health regarding what to look out for in patients presenting a history of vaping and lung symptoms,” Health and Wellness Medical Director Dr. Steph Walters said.

McClure and his wife Tami are now working to promote awareness of the potential dangers of vaping.

“I’m just convinced that we’ve got to continue to [educate] and to share our story and share our experiences prior to, during and after Elijah’s illness,” McClure said.

When McClure first posted about their story on Facebook on Sept. 2, he simply wanted to update friends and family on the situation and raise awareness about the dangerous effects of vaping. Since then, the post has been shared almost 300 times, and regional and national news networks such as KARE-11, WCCO and MSNBC picked up their story.

The networks linked their story to Health and Human Services Secretary Alex Azar’s Sept. 11 announcement that the Food and Drug Administration plans to remove all flavored e-cigarette cartridges from the market in an attempt to decrease youth vaping.

“This kind of came at the right time,” McClure said. “As a lot of the cases and examples began to come up, so that our son and his face ended up getting national news.”

McClure hopes he can use the momentum from this story to debunk the myth that vaping is a safe alternative to smoking tobacco cigarettes.

“I think [those messages] played a huge part in Elijah continuing to vape,” he said.

Over the past several weeks, McClure has fielded phone calls and messages from concerned parents across the country whose children use e-cigarettes. They ask if a symptom seems normal or irregular, or how to talk to their children about the practices’ dangerous effects. He tries to respond to as many calls as quickly as he can.

“We need to save our young people’s lungs,” McClure said. “because the next set of lungs that are injured could be the lungs that belong to the next Supreme Court justice, the director of some community-based organization, or whatever people decide to do.”