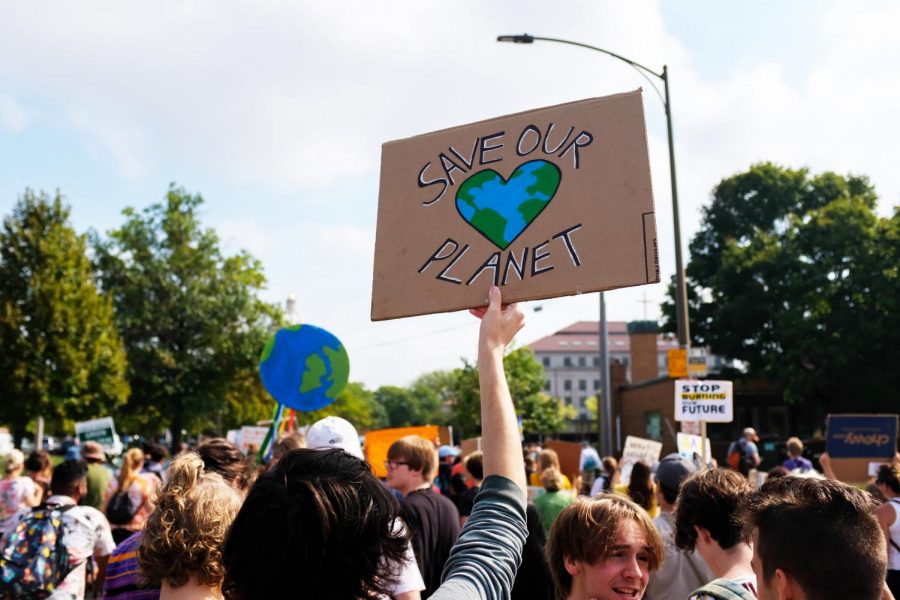 Among the many colorful and creative signs stippled throughout the crowd of over 5,000 at the Minnesota Global Youth Climate Strike this past Friday, one was a familiar sight: the Macalester logo, printed on a six-foot banner and carried by a group of student activists.

Approximately 250 Macalester students, joined by members of the college’s staff and faculty, took time out of their Friday to attend the Minnesota iteration of the global strike at the state capitol building in St. Paul.

Around 150 of the participating students took public transit to the event — the Civic Engagement Center distributed free bus tokens to those planning to attend the day before — and roughly 100 more bicycled to the capitol in a communal ride organized by MacBike.

Sunrise Macalester, the college’s chapter of the environmental advocacy group Sunrise Movement, spent the week leading up to the strike canvassing at the college, organizing transportation to the event and putting up posters across campus.

The organization’s leaders were impressed with Macalester students’ level of engagement with the strike.

“Normally when you’re canvassing out in the community, it’s a lot of people saying ‘just no, get out of my face,’” Sunrise member Adam Marquadt ’22 said. “Definitely upwards of 50 percent of Macalester students I talked to… were really interested and were saying ‘I can’t go but I really want to,’ or ‘I’m definitely going to be there,’ so that was very encouraging.”

One obstacle for a number of students who wanted to participate in the action was their class schedule — and professors who had classes scheduled during the strike handled the conflict differently.

When students approached Arabic language professor Greg Halaby asking for leniency on their Friday attendance, he decided to make his 10:50 a.m. class optional.

“I support my students in engaging civically, peacefully, in causes that are meaningful to them and their future,” he said. “Especially when [their desire to do so is] articulated clearly as a set of values.”

Other professors called class off altogether.

“I’ve been working on climate change issues for over eight years either [with my] research or now in a teaching role, and I feel the urgency very strongly,” environmental studies professor William Longo said. “I think what I said to myself was I can’t justify having my class being a barrier to someone wanting to attend the strike.”

Longo attended the strike himself and was impressed by the organization and speaking ability of youth leaders.

“My motivation for going was to be counted as someone who’s supporting young people — even [those] younger than undergraduates,” Longo said.

Sunrise member Linnea Henrikson ’22 notes that on the whole, Macalester professors were overwhelmingly supportive of the student strike.

“Most of the professors I know were very on board for this,”  Lewis-Norelle said. “I didn’t hear of any professors saying that students shouldn’t go.”

But some professors were blindsided by their students’ absence for the strike. French professor Claude Cassagne learned about the strike when one of his students approached him at the beginning of class on Friday and told him that they planned on walking out in order to attend. He decided not to mark the student absent.

“If it’s really that important to them I’ll let them go, as long as they don’t use it as an excuse to get out of class,” Cassagne said.

Cassagne was surprised that the college administration did not send out a notice to professors about the strike. He recalls that in years past when major protests have attracted student interest, the college notified faculty and staff in advance.

“In the past we’ve had emails saying ‘today is this day, be aware that students might be missing class for this or that,’” Cassagne said, though he wasn’t able to recall any specific instances.

The lack of a formal administrative endorsement didn’t bother Sunrise organizers, however.

“It is a strike,” Marquadt said. “So, we’re not necessarily looking for legitimacy from any administration.

“We’re not looking for the institution to support us,” he continued, “especially when we are actively engaged in… an ongoing discussion with the administration about their role in this fight and [fossil fuel] divestment.”

Sunrise Macalester hopes that the momentum for climate action at the college doesn’t end with the climate strike.

On Saturday, Sept. 28, Sunrise is sending several members to the Gichi-Gami gathering in Duluth to protest the Enbridge Line 3 pipeline slated to be built in the area.

They also plan on collaborating with Fossil Free Mac on their campaign for Macalester’s divestment from the fossil fuel industry and supporting climate action bills like the Minnesota Green New Deal and a gas tax.

Although the Sunrise movement has not yet endorsed a candidate, the group is active in the 2020 presidential election as well.

Both the national Sunrise movement and the groups who organized Friday’s strike are led by young people. Macalester activists want it to stay that way.

“This is a grassroots movement,” Marquadt said. “We’re young people. We’re going out to spread a message regardless of whether or not adults approve of it.”

Hannah Catlin and Abe Asher contributed to the reporting of this story.

For coverage of the climate strike itself, see here.