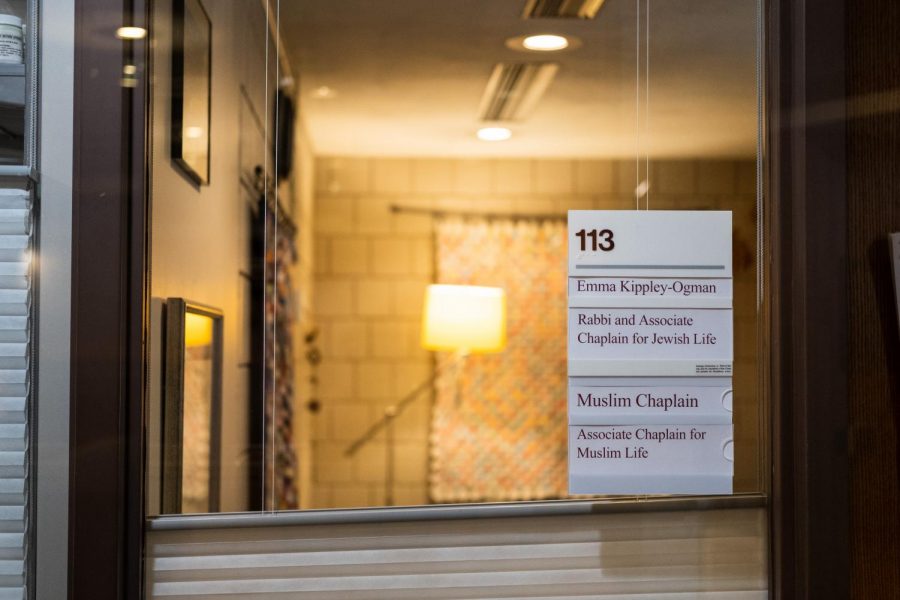 The Jewish and Muslim chaplains’ office in the CRSL. Photo by Kori Suzuki ’21.

For the first time since the summer of 2016, there is no Muslim Chaplain on Macalester’s campus.

After nearly four years in the position, Ailya Vajid, the Associate Chaplain for Muslim Life, left the college in August for a position at the Hadi Initiative, which supports Muslim life on college campuses. She will also serve as a chaplain at the University of Virginia.

Vajid began working at Macalester as a consultant and was later hired as a part time employee in the Center for Religious and Spiritual Life (CRSL). She became Macalester’s first-ever Muslim chaplain.

“The hire was two-part, meant to really be a direct support for our Muslim community around practice, observance, questions they might have about their own identity,” College Chaplain and Associate Dean of the Center for Religious and Spiritual Life (CRSL) Rev. Kelly Stone said, “[and] also to be somebody who could be present within our community to speak about Islam, so we weren’t asking students always to do that.”

“In this kind of work, the students really become your community,” Vajid said. They’re like family. It’s such a relational campus that you feel so deeply connected to everyone. It was a really, really tough decision to leave Macalester.”

Transitioning from a small liberal arts college to a public university with a student population ten times Macalester’s poses its share of challenges.

“On the one hand, I was hired as a Muslim chaplain at UVA,” Vajid said. “On the other hand, I’m not officially affiliated because it’s a public institution and separation of church and state.”

The Hadi Initiative, based in Washington, D.C., models itself after Hillel in the Jewish community. Vajid’s work there will deal with expanding Muslim chaplaincies to colleges and universities across the country.

“They’re [the Hadi Initiative] seeking to create more support systems and professional networks for Muslims in college and at that stage in life,” Vajid said.

The field of Muslim chaplaincy has expanded and evolved greatly over the past 20 years.

In 2005, according to Stone, there were just five Muslim chaplaincies around the country. Now, there are roughly 70 — split between colleges, prisons and hospitals.

“There are efforts to train folks here in the United States, which is different from most training programs for Immans, w[ho] are leaders in mosques,” Stone said. “The skill set they’re building helps equip them for the audiences they’re working with.”

Stone believes the growing field and the draw of Macalester itself will make it easier to find Vajid’s replacement.

“Macalester is a great place to work where we have a strong interfaith program, a strong pluralistic understanding and orientation of our office,” Stone said. “[That] is incredibly attractive to people who are going into the field and want to work not only with a particular community, but also a diverse community like Macalester.”

Understanding the multi-faith orientation of Macalester is especially important, but there are other requirements too.

“It’s important for this person to be a good listener and super approachable,” Stone said. “You want someone who you feel comfortable walking in their door and sharing a piece of your life story or a really tender question that you’re holding.”

Aliya Mahmoud ’21 came to Macalester unsure about how she would fit in with the Muslim community. Once she arrived, with Vajid’s help, she became more comfortable with her faith.

“I was a little worried to join MSA (Muslim Student Association), and what the community would be like,” Mahmoud said. “But [Vajid] was so welcoming and just so open and encouraged me to meet with her and talk with her whenever. She introduced me to a lot of other students who I connected with.”

Ultimately, Mahmoud believes open-mindedness is the most important quality in a college chaplain.

“I hope that they find someone who is open about any kind of faith, and is just this welcoming presence,” Mahmoud said. “I know for someone like me who isn’t as traditional or isn’t as practicing, I still felt so accepted.”

Stone also stressed that chaplains are available to any student, regardless of religious affiliation.

“We know that there is a multitude, in any religious tradition, of identities people hold,” Stone said. “It’s important for that person to be able to meet people where they are, and walk alongside them as opposed to leading them to a particular destination.”

To get more student input regarding the hire, the CRSL held open listening sessions throughout the week.

“It’s been really important to us that we are able to hear feedback from current students, particularly our Muslim students, since this person will be the primary point person to support that community,” Stone said.

MSA President Shireen Zaineb ’20 has been involved in the selection process. She attended the first listening session and hopes to be on the student search committee.

“We had our first listening session this past Friday,” Zaineb said. “We shared back what was important to us personally and what we felt would be important for first-years, for the general student body, to have in someone who would take Ailya’s role.”

At the listening session, students discussed qualities a future chaplain should have — from academic credentials to personality traits.

“People seemed to really want someone kind and caring and warm, and a lot of that comes from what they saw in Ailya,” Zaineb said. “It was nice to see how she has shaped this image of what a good chaplain is in a lot of people’s minds.”

Vajid was heavily involved with MSA, and had a major impact on the group.

“Ailya started at Macalester my first year, so we were sort of getting used to college together. I’ve been really close to her since the first semester of my first year,” Zaineb said. “A big part of this year is figuring out how to be without a chaplain, while still making the first-years feel supported.”

The CRSL hopes to post the position by the end of September and begin the interview process in the late fall.

“I think it’s really important to have a chaplain in the lives of religious students, and especially in the lives of Muslim students here at Macalester,” Zaineb said. “It’s a really small community, it’s really tight-knit and it’s pretty diverse. Because of that, we tend to band together around a lot of things — and Ailya was always really essential to that.”