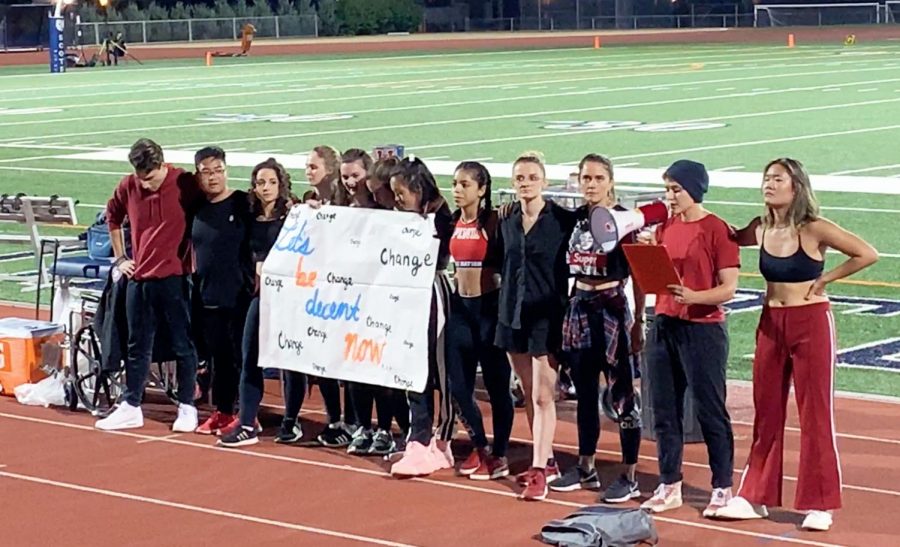 Please be advised, this story contains discussion of homophobia, transphobia and sexual violence.

On Saturday, Sept. 14, Macalester hip-hop dance crew 13th Street performed at halftime of the football team’s home opener against Hamline. After the dancers finished their routine, they gathered on the Dayton Track and read a 4-minute statement to the crowd addressing what they described as recent instances of homophobia, transphobia and predatory behavior on the football team.

“Over the last couple of weeks, we heard that members of the football team were making homophobic and transphobic remarks,” 13th Street member Bonnie Hoekstra ’21 said at the demonstration. “As a dance group with many queer members, this was extremely disappointing to hear.”

Members of the football team told 13th Street that those comments were made at practice, while a football player also sent a meme in a players-only email chain advocating the predation of first-year women early this semester.

“After these instances happened, the individuals who said those things and sent those things were addressed by members of the team, by seniors specifically,” defensive lineman Ethan Levin ’20 said, referring to the bigoted comments and predatory meme.

The individual who sent the meme later apologized in the email chain.

During their statement to the crowd, 13th Street member Cathy Truong ’22 spoke about members of the football team participating in sexual violence prevention trainings but continuing to perpetuate a culture tolerant of sexual violence.

“These trainings mean nothing if the underlying culture of these teams support the very same attitudes we are trying to prevent,” Truong said.

After Truong spoke, crew member Laura Botero ’21 asked athletes to step forward and take responsibility for the offensive actions of some.

“Authority figures in athletics within our community,” Botero said, “You must recognize your responsibility in fostering a culture that keeps our community safe and accepting.”

Botero believes that the Macalester football team knows that it has a negative reputation, but has not meaningfully addressed the problematic behaviors that have earned it that reputation.

“[A lot of male athletes] don’t feel like Mac likes them and Mac supports them,” Botero said in a later interview with The Mac Weekly. “I honestly think that a big part of Mac doesn’t. But I don’t think they have ever stopped to think about why.”

The halftime demonstration raised a number of questions about the culture of the Macalester football team — which the team’s Twitter account describes as “the most progressive football program in America.”

“I’ve been a Division-III player, I’ve been a coach, I’ve been in several schools,” Brooks said. “[The Macalester Football team] ha[s] the tough conversations. But I can’t claim that they’ve got it figured out either. The thing that I’m excited about is a door has opened now [for future conversation].”

“The success of the protests and the true progressiveness of Macalester’s football team will be [revealed by] how it moves forward in dialogue with 13th Street and the rest of campus,” Levin said.

Levin found the parts of the statement that addressed sexual violence especially impactful.

In 2018, Levin founded Athletes Against Sexual Violence (AASV), a peer-learning program that sends college athletes into high schools to teach consent and sexual violence prevention. Many of Levin’s teammates have helped facilitate the programs at schools in the metro area.

“The work was never going to stop there,” Levin continued. “This protest is really going to push us to keep moving forward with that work.”

In addition to leading sexual violence prevention efforts at local high schools, members of the football team participate in Green Dot Bystander Intervention training — an interactive workshop first brought to campus in 2014 to increase students’ ability to recognize potentially violent situations and how to de-escalate them.

Levin believes the team will work to address bigotry and sexism and is disappointed that the campus community became aware of the offensive content.

“It’s very unfortunate that it got out and other people heard it and [were] harmed [by] it,” Levin said.

Members of 13th Street said that while they appreciate the football team’s efforts to address statements of hate and instances of sexual violence, they want the team to hold their players accountable for bigoted statements and sexual misconduct.

“The problem isn’t Green Dot training, or [that] Mac doesn’t do enough to talk to these students about consent,” Truong said. “They try their best, and they program it into curriculum… the thing is accountability. No one knows about the stuff that happens.”

Brooks is hopeful. He believes the protest will make space for team leaders to gather and speak on the team’s culture.

“I think how you build [a forum is] from a format where you get solution-oriented leaders together, to really truly define the problem,” Brooks said. “So that we know what the problem that we’re fighting actually is, and that we’re working towards solutions and things that we can and will all do to make our community better.”

Brooks sees engaging in conversations about sexual violence and talking about “mistakes” generally as a means to reduce the number of incidents of bigotry and sexual misconduct.

“I don’t think accountability looks like doing nothing,” Brooks said. “I don’t think accountability looks like kicking the student out for that first mistake that they make either. I do think, though, that there are some standards of behavior that we talk about [in] community. From the moment students walk in that we tell everybody, this is how we want to live.”

In addition to ceasing any bigoted commentary on the field or over email, members of 13th Street also hope that Macalester football will further examine their contribution to negative campus party culture. In part because Macalester has no Greek life, members of athletic teams host many of the college’s well-attended off-campus parties.

Anael Kuperwajs Cohen ’21 likened the athletic party culture to that of fraternities — suggesting that the connotation breeds more instances of rape and sexual assault, as well as creates a generally unsafe atmosphere.

“[Sports teams and parties] just need to somehow be separated from the idea that they are our Greek life, right?” Kuperwajs Cohen said. “Because that association allows for certain behavior from everyone.

“And that party culture needs to start being one where safety is prioritized for the people,” she continued. “And that’s not to say that [parties] can’t be fun, right? There’s nothing out there that means we have to get rid of the parties. But they can be done in a way that’s safe and doesn’t replicate, or attempt to replicate, Greek life.”

Levin, who was named to the Allstate AFCA Good Works team for his leadership of AASV, hopes that the 13th Street protest will make a lasting impression on members of the team.

“We, Macalester football, have been active in addressing these elements in our culture in the past,” Levin said. “That being said, we are not perfect individuals, our team [is] not perfect.”

Footage of the 13th Street Address is below. Courtesy of Bonnie Hoekstra ’21.