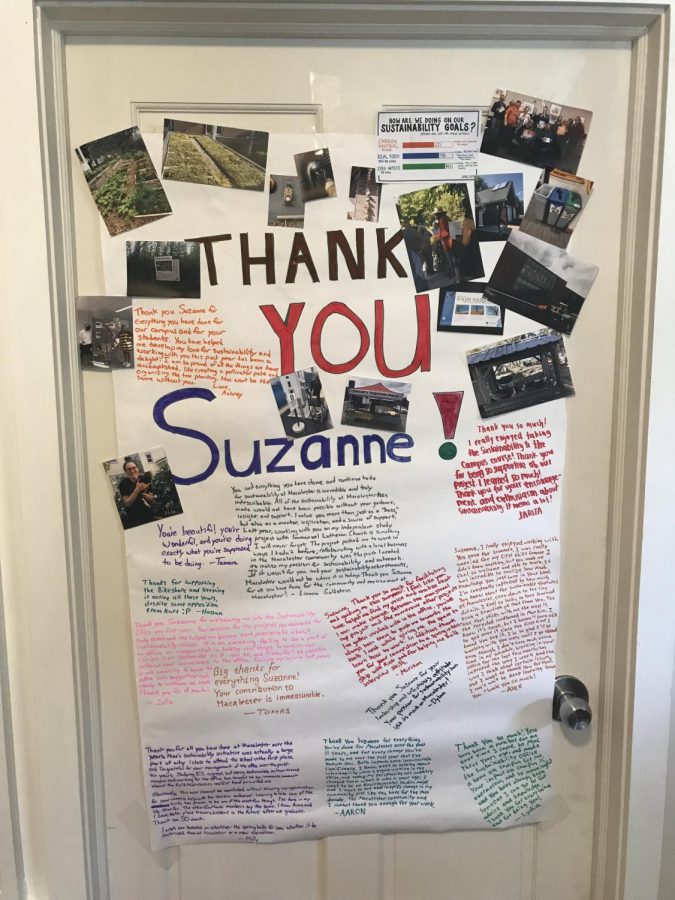 Well-wishers show their support for Sustainability Manager Suzanne Savanick Hansen after news that her position will be dissolved after this semester.

When Macalester first created its sustainability office over a decade ago, there was no on-campus composting, no pig feed program, no monitoring of the college’s carbon footprint and little cohesive support for sustainability efforts.

Sustainability Manager Suzanne Savanick Hansen has been at the helm of the office since its inception in 2008, leading its initiatives and teaching one class per year on campus sustainability.

But this will likely be her last semester at Macalester.

On Sept. 9, Provost Karine Moe and Vice President for Administration and Finance David Wheaton announced via the Mac Daily that the college is making several major changes to the sustainability office’s operations.

First, the office will be moved from the operations reporting line to the academic line. This means that representatives of the sustainability office will report to Moe instead of Wheaton.

Second, the sustainability manager position — Savanick Hansen’s position — will be dissolved. In its place, the college plans to hire a new Director of Sustainability, who will start in January 2020.

This reorganization follows a comprehensive 2017 external review of Macalester’s campus-wide sustainability initiatives. The final report included a list of recommendations to the college as it continues to develop its programming.

The report praised the college’s “excellent sustainability office” and broad engagement from the student body.

Under Savanick Hansen’s leadership, Macalester has decreased greenhouse gas emissions by upwards of 30 percent, increased the waste diversion rate from 17 percent to over 70 percent and sent students to the 2015 United Nations Climate Change Conference — the meeting at which the Paris Agreement was negotiated.

However, it also concluded that sustainability should be more deeply integrated into curricula  — calling on the college to address “a grey cloud of tension” between the sustainability office staff and Macalester faculty.

While the review’s suggestions did not include a restructuring of the sustainability office, Wheaton cited the report as one of the most prominent inspirations for these changes.

“I think the [external] review… actually implies going to the next place, doing the next thing, ramping it up,” Wheaton said. “We took that as a guide for saying ‘what do we think that means from the point of view from internal college leadership?’”

According to Wheaton, the decision to restructure came from the “senior staff” at Macalester — administrators including himself, Moe and President Brian Rosenberg.

When Wheaton told Savanick Hansen in mid-May that her position would be dissolved by the end of the year in favor of hiring a Sustainability Director, she was surprised.

“My job description and the one that is being proposed are very similar if you actually look at them,” Savanick Hansen said. “It’s a little shocking — quite shocking, actually — to change the focus of what we’ve been doing.”

Between May and August, Savanick Hansen kept the announcement largely to herself, sharing it only with Sustainability Project Coordinator Tamara Will — a temporary employee who was only hired to work in the office in June.

Even after a few months of processing, Savanick Hansen said telling her students in August was one of the most difficult things she has had to do.

“It’s harder once it becomes all public here and I have to tell my students,” Savanick Hansen said. “I have students who have been working with me for a long time, so I did wait to find out if they still had jobs in the spring, I had to figure that out too before I said anything.”

As she recalled these conversations, Savanick Hansen became choked up.

“It’s been really hard,” she said. “Particularly telling my students.”

Other members of the sustainability office were similarly shaken by the announcement.

“The [new Sustainability Director position], as described, fits Suzanne,” Will said. “Her qualifications and her experience fit the description perfectly, so there is some confusion as to why her position is being eliminated.”

Student employees in the sustainability office also voiced their confusion.

“We’re worried and we’re confused and a little bit disappointed that the college would just blindside everyone and change everything,” Student Sustainability Office Coordinator Lydia Sulik ’20 said.

While office employees grappled with the news, the announcement also surprised staff, faculty and students on the Sustainability Advisory Committee (SAC) — who were told about the restructuring at roughly the same time as the student body.

“I felt, as a faculty member,” he continued, “that this was not appropriate.”

Guneratne was formerly co-chair of the SAC and had served the committee since its inception in 2008, but decided to resign in response to the restructuring announcement.

“I decided there was no purpose in my serving on this committee anymore and so I resigned,” Guneratne said.

“I happen to believe the whole business of climate change and sustainability is probably the most significant issue that confronts all of us at the present moment,” he continued. “We have to get all the various constituencies on campus on board… It’s not the kind of thing that can happen with edicts from on high.”

Wheaton said he hopes that moving the office to academic affairs will open up new avenues for educational programming, as well as create opportunities for collaboration between the sustainability office and faculty.

Associate Dean of the Faculty Paul Overvoorde feels similarly and sees the restructuring as a natural next step.

“This isn’t something that’s just come out of the blue,” Overvoorde said. “There’s been some momentum, there’s interest from faculty who are on campus… [the sustainability office] is something that’s going to get some support because it’s now housed in a different part of campus.”

Guneratne worries that won’t be the case.

“A staff person in this new office could be a sort of cheerleader, for sure, but… whoever is in that job would have to be someone who can persuade the faculty to go in this direction rather than another direction,” Guneratne continued. “I can’t make any sort of prediction about how that would work.”

The external review does highlight Macalester’s struggle integrating sustainability into curriculum, and called on the Provost’s office to find “supplementary support” for professors who want to adapt their syllabi.

Environmental studies department chair Roopali Phadke echoed this need for a shift in how the college approaches sustainability in its classes.

“Suzanne has tried to make that happen, but part of the challenge has been her position is not within the academic program,” Phadke said. “She’s done amazing work, and we’re way farther than we were a decade ago, but I think some of the opportunities and challenges are different now than they were in 2005.”

Savanick Hansen said she agrees that sustainability needs a stronger place in curriculum, and after teaching and co-teaching ten classes at Macalester and attempting to work with faculty, she’s well aware of the practical challenges anyone trying to do that work faces.

“We’ve been doing curricular support since we got here, but we didn’t have a lot of support for it,” Savanick Hansen said. “We [did] what we could do, but it wasn’t a priority.”

Will sees a need for more support from the administration as well.

“Having that overt support of leadership, I think, is something that’s been missing from this office — having the leadership of the college say ‘Zero Waste by 2020’ and really get on board,” Will said. “There’s only so far you can go from the ground up.”

But the impending changes are far from the support that Savanick Hansen thinks the office needs.

“The key is to include the operational pieces, the co-curricular pieces, and the curricular pieces so that you have a comprehensive sustainability program,” Savanick Hansen said. “If you don’t, then you’re missing something, and in some ways you’re going backwards.

“There’s a lot of work in this office,” she continued, “and you’re going to take a whole other major focus, and change the focus of what this office does, something’s gotta give.”

Will has similar concerns regarding what might be lost in this shift.

“Working here long enough, I know that this is more than a full time job,” Will said. “So, when the position was described as focusing more… on the curricular and co-curricular, what I thought was: what’s going to happen with the rest of it?”

The answer to this question is unclear. Wheaton recognized that as the role of the office shifts, some of its programming may change or dissolve.

“Realistically, there will be some reprioritization of what we have done,” Wheaton said.

Wheaton and Moe’s Mac Daily announcement acknowledged that “some evaluation of priorities in these areas will likely be required.”

Members of the sustainability office have raised concerns about what work may or may not be deemed important.

“I don’t think [administration] really understand what we do,” Sulik said. “I think everything that we do is important.”

It is also unclear how the shift toward academics will affect current sustainability initiatives and projects, with the clock ticking on multiple sustainability goals including Zero Waste by 2020 and the race to be carbon neutral by 2025.

The search for the new Director of Sustainability will begin in earnest Oct. 1, when the portal for applicants closes. At that point, a search committee — chaired by Overvoorde — will convene to discuss what the college is looking for in their ideal candidate.

Alongside Overvoorde, the committee will consist of Moe, Wheaton, three faculty members — including Phadke — two staff members and one student. Ideally, Overvoorde would like to see the student representative be MCSG’s sustainability officer, but nobody currently holds that position.

Overvoorde hopes to bring candidates to campus to meet with students by early November.

“Certainly, the student input will be important,” Overvoorde said. “Whether it will be open to the entire campus or to a targeted audience like the sustainability student workers or some of the student orgs that have particular ties.”

Wheaton is particularly excited to see a candidate bring a fresh perspective to the office as Macalester enters the next chapter of its sustainability programming.

“In the end, what we’ve decided as we’re thinking about this shift in the role and the position, we want to see what opportunities there are to see what kind of skill set we can bring to this redefined role,” he said.

One of those applicants will be a familiar face.

“I am going to apply,” Savanick Hansen said. “I think I’m the best-qualified person for the job.”