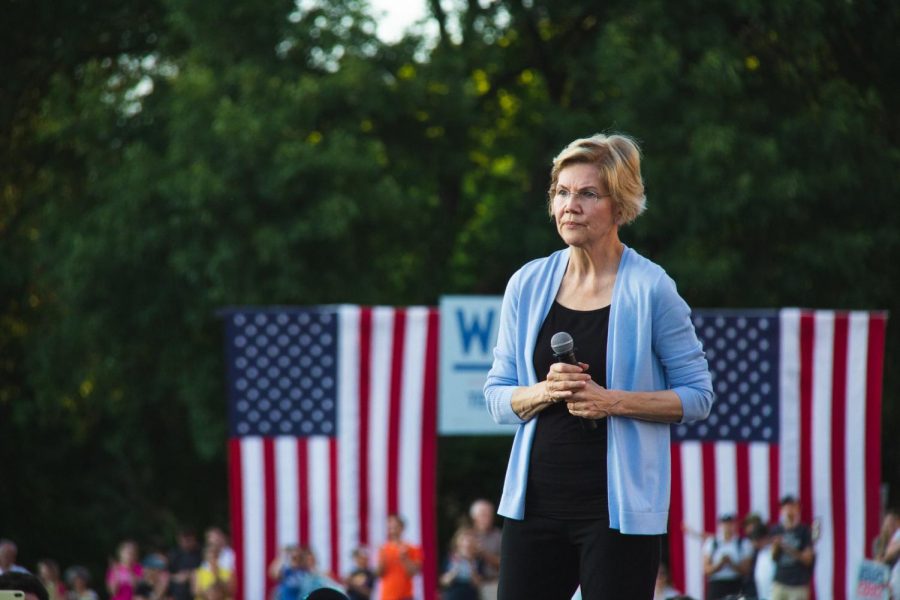 This August, Elizabeth Warren hosted a town hall at Macalester’s Shaw Field, her first Minnesota visit during her campaign to win the Democratic nomination for the 2020 elections, addressing the fight for economic justice and the rebuilding of a middle class.

Official spokespersons for the Warren campaign estimated that 12,000 people attended the town hall—one of her largest campaign events to date. In fact, the high RSVP count prompted a last-minute change of location from the Leonard Center Fieldhouse, which the campaign feared could not hold the number of attendees. Prior to the event, the line to enter the event area wrapped around the length of campus.

Warren walked out on stage to raucous cheers from the crowd, some of whom had been waiting in line since the early afternoon to see her.

Warren stuck close to her campaign’s central message of progressive economic justice during her hour-long speech, using examples from her personal life to illustrate why she cares so deeply about propelling systematic change in government.

Warren said she “learned words like mortgage and foreclosure” while her family was struggling to pay  for her father’s healthcare costs. She spoke of her stay-at-home mother’s choice to support her family by seeking a minimum wage job for the first time. “No matter how scared you are,” Warren said of the lesson she took from her mother’s actions, “you pull it up, and you take care of the people you love.”

A portion of her speech was devoted to talking about her specific policy plans.She discussed solutions to corruption in Washington DC, climate change, and economic inequality. Warren acknowledged the expenses attached to her preferred solutions, and proposes passing a wealth tax on people with assets over $50,000,000 to pay for her plans.

“I’m not doing this because I’m cranky,” Warren said, referencing the tax. She noted that those with wealth in America have been long-supported by workers and labor, “using roads that all of us paid for.”

The event was open to everyone, and many Macalester students present on campus in late August were in attendance.

“It was my first political event,” Ciara Moore ’21 said. “It gave me some perspective, and I liked when she talked about science.”

After the event, Warren fulfilled an earlier promise to take selfies with everyone who wanted one. The selfie line lasted over two hours after the event wrapped, and Warren stayed until the end of the line.