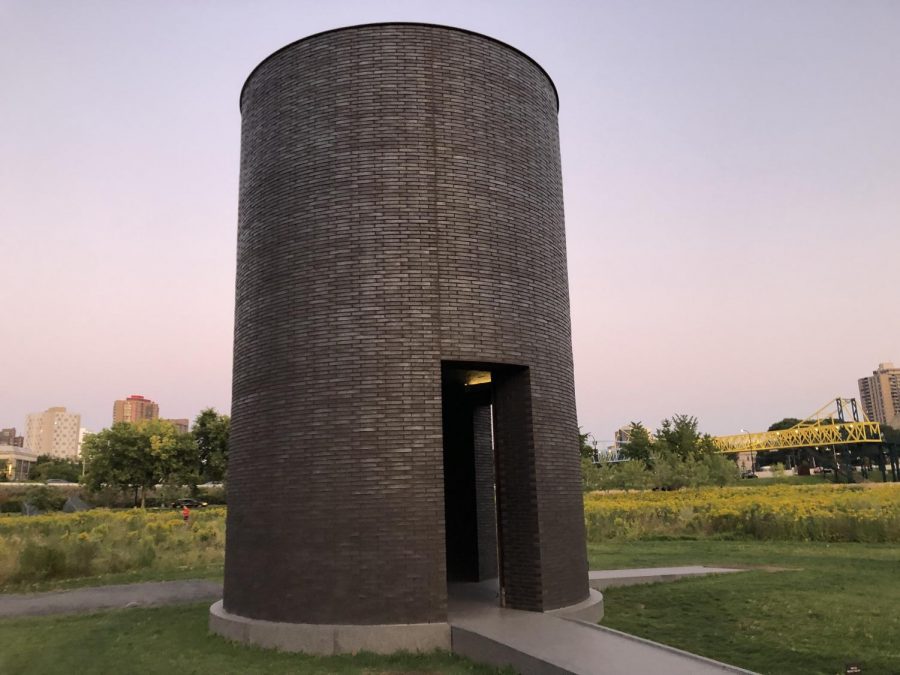 The idea of archiving is essential to Theaster Gates’ new exhibit at the Walker Art Center, Assembly Hall. This commitment to archival work is embodied in the companion installation in the sculpture garden, Black Vessel for a Saint. Its walls are made of leftover bricks from construction projects. It houses a statue of Saint Laurence, patron saint of librarians and archivists, which was salvaged from a Chicago church. This testament to archiving advertises it as a place for all to reflect and gather, and is itself an archive of things left by the wayside. It is very much like the Dorchester Projects, one of the rehabilitated abandoned sites Gates has transformed into a community space for art and culture in the South Side of his native Chicago. A place that was left behind is reconstructed as a pillar of community and preservation.

The conscientious attitude towards the past appears immediately upon entering the actual exhibit. museum-goers enter a room with art projected along the walls. These changing images come primarily from Gates’ massive collection of glass slides originally from the University of Chicago. In 2009, Gates’ came into possession of these slides, whose images have been used to teach art history for over half a century. Grabbing them just as they were about to be thrown away, Gates discovered a fascinating and disturbing history of the institution’s eurocentrism. Out of the 60,000 pieces of art, fewer than 50 are African illustrating the erasure of black art from the mainstream conception of art history. Jordy Breslau ’17, who worked with Gates at his studio for two summers, said of the exhibit, “[Gates] is drawn to archival work as a way to correct how black history and art history has been written.” Gates presents these slides in a new context, as the projected images occasionally change to video and audio from art history lectures that attempt to find blackness in the art canon.

Stepping into the second of four rooms, the overbearing whiteness of the University of Chicago’s art history collection is immediately countered. A blazing orange room is defined as “A Space for Reading.” Atop an expressively patterned carpet two comfy couches sit in front of a coffee table strewn with vintage issues of “Ebony” and “Jet” magazines. The room is what “Jet” and “Ebony” publisher Johnson Publishing Company (JPC), refers to as “the pinnacle of mid-century African modernism.” JPC was a preeminent black publisher of the 20th Century and the furnishings in part come directly from the JPC collection housed in the Stony Island Arts Bank. Gates was involved in the archiving at Stony Island Arts Bank, which is now a library, community space and gallery. Paintings by African American artists line the walls of this reading room, along with African statues whose plaques read “Yoruba, Nigeria, Dogon, and Mali.” A curated playlist soothes the room with Sly and the Family Stone and Sam Cooke. In contrast to the erasure of black art explored in the previous room, the JPC collection shows an abundance and celebration of black culture.

But then the tone of the exhibit changes once again fast enough to give the museum-goer whiplash. The third room is packed with racist memorabilia, a collection defined by retired business man from the South Side of Chicago Edward J. Williams. The first African American male employee of Harris Bank, Williams formulated this collection starting in the 70s, initially as an attempt to remove these objects from circulation, but later simply as a reminder of how widespread racist representation of African Americans was in the United States. Such racist depictions infest a peculiarly broad category of objects. There are children’s books labeled “Uncle Tom’s Cabin: Young Folks’ Edition” and smoking tobacco advertised with chaircutres of black children. There are puppets, dolls, ceramics, branded toothpaste, coffee, nougatine, board games and even a cookie jar. The prevalence of such images in the mundanest of household items shows how deeply extreme racism and white supremacy embedded itself into the daily lives of Americans. Gates has long had this interest in racist memorabilia.  In an exhibition at the Getty Research Institute in California, Gates created The Dancing Minstrel II, which was a reimagining of such racist memorabilia. Based off of a toy, this larger than life of black caricature “dances” up and down when museum-goers jump on an oversized platform at its feet. The interaction prompts to the museum-goer of how they might actively be a part of perpetuating these stereotypes and racist attitudes.

The exhibit attempts to archive the erasure of blackness, the celebration of blackness, and the vilification of blackness, and in the last room tries to imagine spaces for the future. Returning to the theme of rehabilitation and recycling, museum-goers can sit on benches made out of recycled wood from Gates’ studio. The walls are lined with ceramics made by Gates and his studio team and museum-goers are invited to drink tea from mugs that are a part of the collection. This philosophy of creating interactive spaces of art and community is a persistent project and goal for Gates. Despite the presence of decay, Gates pushes for revival and reclamation. “What are the ways we can use art to change systems? That’s what at stake for me.” Breselu said, “Gates takes responsibility towards objects and collections that others deem disposable, and through preserving them he highlights the richness of the communities and histories that already exist.”

The exhibition will last until February, 12th, 2020 at the Walker Art Center.