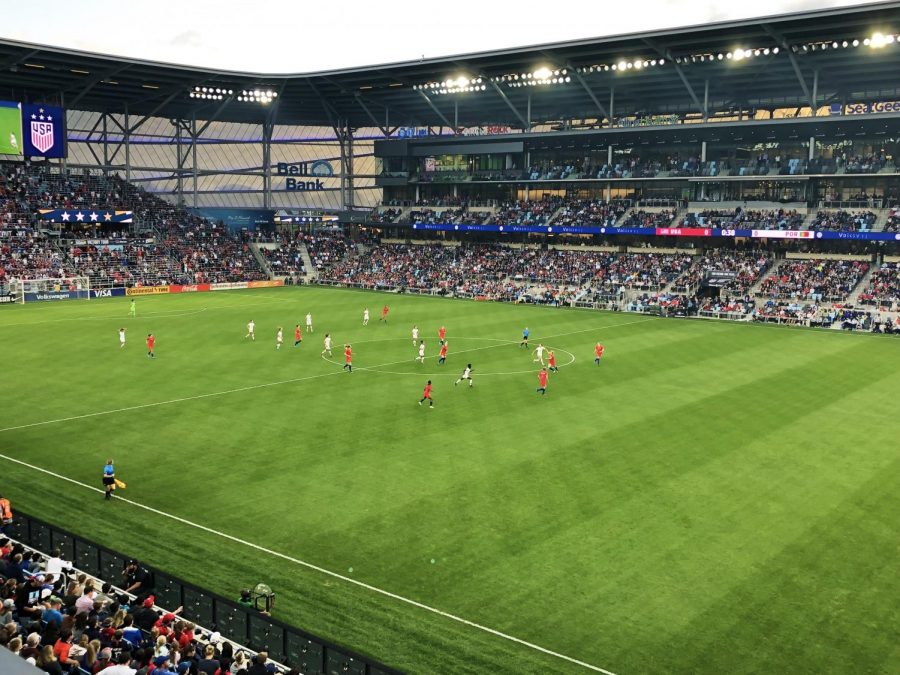 On Sept. 3, the United States Women’s National Soccer Team (USWNT) defeated Portugal 3-0 at Allianz Field in St. Paul in an international friendly match. The game was the USWNT’s third in their nation-wide victory tour after winning this summer’s FIFA Women’s World Cup.

USWNT captain Carli Lloyd opened the scoring in the 22nd minute with a short drive into the net after multiple deflections off of Portugese defenders. Lloyd doubled the score in the 32nd minute, converting a penalty kick drawn by fellow USWNT forward Tobin Heath. Those two goals brought Lloyd’s career goal total with the national team to 117.

The USWNT’s final goal came in the 83rd minute, when forward Christen Press floated a corner kick into the box for Lindsey Horan to head into the net. Kristen Hamilton, a newcomer to the USWNT, earned her first appearance when subbed for Jessica MacDonald in the second half.

The win in Minnesota brought USWNT coach Jill Ellis her 105th victory at the helm of the national team, tying her atop the leaderboard with the legendary Tony DiCicco. Though Ellis has announced that she will step away from the USWNT job after the victory tour, she may surpass DiCicco during the tour’s final stretch.

The victory tour began on Aug. 3 in Pasadena, CA, at the Rose Bowl, where the USWNT defeated Ireland 3-0. It continued in Philadelphia on Aug. 28, where the USWNT beat Portugal 4-0 in front of a record-breaking 49,504 fans at Lincoln Financial Field.

In St. Paul, the team sold out the much smaller Allianz Field, playing in front of a crowd of 19,600 people.

Following this game, the USWNT has a month-long break that is set to last until Oct. 3, when they will play South Korea in North Carolina before facing them again in Chicago on Oct. 6.

In addition to the match, the USWNT also offered an open training on Sept. 2 at Allianz. The team opened a portion of the stadium to fans to watch them prepare for the game against Portugal.

This past summer, the 2019 FIFA Women’s World Cup (WWC) was held in France. The WWC is the premier world soccer tournament for women’s national teams, held every four years. The USWNT won the tournament for the fourth time overall — and second time in a row — when they defeated the Netherlands 2-0 on July 7 in Lyon, France. After their win, U.S. Soccer, the national soccer federation, announced a victory tour with stops across the country.

After the victory tour, the USWNT will begin preparing for the 2020 Olympics in Tokyo, Japan, where they will have the opportunity to defend their ranking as the number one team in the world. The team may be looking for redemption in Tokyo, as their last Olympic appearance in 2016 is a bitter memory.

In the 2016 Rio Olympics, the USWNT was eliminated in the quarterfinals by Sweden in a heartbreaking loss on penalty kicks. The USWNT will certainly be looking to build on its success at the WWC. Additionally,  for many of the older players on the team, including Megan Rapinoe, Ali Krieger, Lloyd and Heath, 2020 may be their last major tournament. With a new coach and an aging roster for the USWNT, the upcoming Olympics may be a first look at the future of women’s soccer both in the United States and around the world.