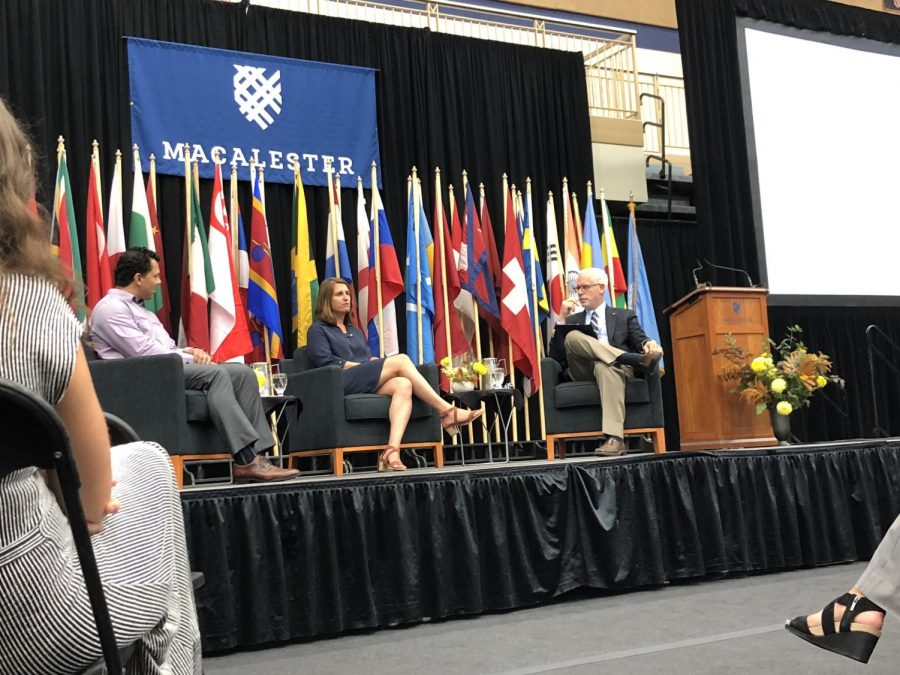 The event featured short speeches from President Brian Rosenberg and MCSG President Blair Cha ’20, as well as several other college officials, leading up to a three-way conversation on social media, virtual reality (VR), augmented reality (AR) and ethics in the digital age.

Van Dyke also noted how peoples’ understanding of how to use social media is ever-changing — highlighting young people’s command of the medium.

“This is the first… cohort who have learned to use social media to their advantage versus social [media] being used against them,” Van Dyke said, referring to the students in the audience.

Pressed lightly by Rosenberg on the extent to which users really have control of their social media experiences — to a round of applause from the audience — Van Dyke gave a telling answer.

“I bring this up, because the company, we are learning from your behaviors.”

The interrogation into Facebook’s use of user data ended there.

The criticism that followed, however, was largely directed at the event itself. Many wanted a more in-depth look at Facebook and their use of user data, which has come under fire repeatedly in the last several years.

“I thought it was a really good introduction to tech, data, what we can do with some data,” Ximena Silva-Avila ’20 said. “But I also felt like it was a very superficial conversation. I was, quite honestly shocked at the direction the conversation went in.

“We had someone from Facebook,” she continued. “The Great Hack, a documentary about Cambridge Analytica and the 2016 elections just came out and that wasn’t mentioned at all.”

Chair of the political science department Paul Dosh said that he would have liked to have heard her answers to these tough questions at convocation.

Dosh added that he wished there had been a more interactive component to the discussion between Rosenberg, Van Dyke and Sen, allowing audience members to ask the speakers questions like these in real-time.

“I think my first reaction was a feeling of disappointment that there weren’t microphones for students to ask questions,” Dosh said. “To have a representative of one of the world’s most powerful and profitable corporations on campus and not have an opportunity for students to directly ask questions, to me, in hindsight, was regrettable.”

According to Sen, data privacy is a relatively new conversation in the world of data analytics.

“In terms of thinking about privacy and algorithmic data, it’s really new, and I don’t feel like we have a lot of really good theories that say ‘okay, this is what we do,’” Sen said. “It’s like, every decision you’re thinking about it and trying to do the best you can.”

Political science professor Patrick Schmidt, who is teaching a course on information policy and law this semester, commented on consumers’ newfound awareness of corporate data collection.

“I used to ask a question: ‘What are you most afraid of?’” Schmidt continued. “The answer used to be government surveillance. Now, it’s private data collection. We’re becoming more and more aware of it.”

To Schmidt, it may be time for a paradigm shift in how people think about their privacy.

“One of the directions that privacy advocates are going, and I think it’s a helpful reversal, is to rather than thinking about privacy as something you can choose to protect if you want to — which puts all the burden on you — that we instead have to think about privacy as something that the ecology or architecture of the system chooses or chooses not to protect,” Schmidt said. “Regulation from the government that sets some boundaries on this is, to my mind, appropriate and perhaps needed.”

Cha was curious to know more about Van Dyke’s personal journey from being a humanities student at Macalester to becoming a leader at Facebook.

“I wanted her to open up more on her personal experience and what she thinks on Facebook and Twitter’s future,” she said.

Cha added that she most enjoyed when the speakers brought Mac students into the conversation.

“I think [Van Dyke] was great in balancing being a tech advocate… and I admired how she, out of that, supported Macalester students and complimented them and how they are able to take ownership of their social media and utilize it in a good way.”

“Shilad is completely right that the world needs Macalester graduates,” he said. “When you have a complicated and informed and nuanced view… a historical view, you make a lot better ethical decisions about what you’re doing.”

During convocation, Van Dyke urged students to take what they learn at Mac into the workplace — particularly into technological fields.

“Whatever new ideas are introduced to the world, there are unintended consequences,” Van Dyke continued. “We need all the education you’re going to get here at Mac to look at what that new is bringing to us and to evolve it… to make it better.”