The Mac Weekly • May 2, 2019 • https://themacweekly.com/76298/news/two-wallets-stolen-during-gdd-break-in-suspect-filming-students-in-halls/ 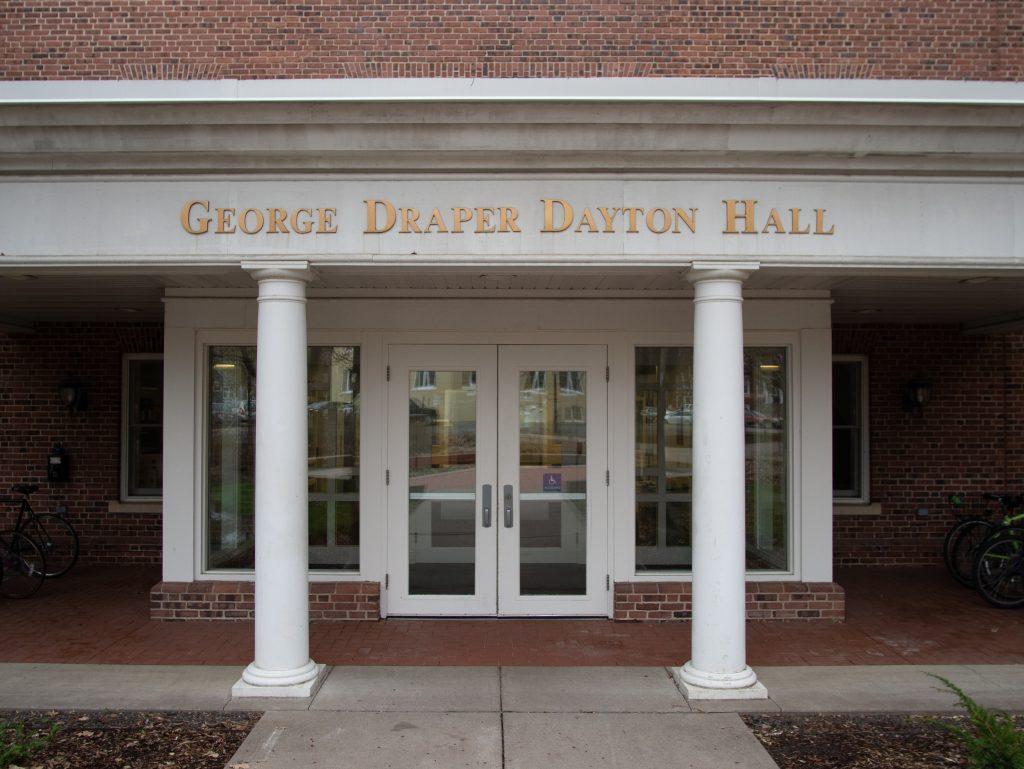 The front side of George Draper Dayton Hall. Photo by Summer Xu '20.

An unidentified individual followed students into George Draper Dayton Hall (GDD) on Saturday, April 20, filming them on his phone. That same day, Sam Jakshtis ’21 noticed his wallet was missing.

Returning to his six-person suite in GDD from football practice, Jakshtis was planning to travel off-campus for the afternoon.

“It was perfect out and, so I was planning to go out to Minnehaha Falls and just enjoy the outdoors,” Jakshtis said. “So, I grabbed my keys but of course I was looking for my wallet. I couldn’t find it which was kind of abnormal because I always know where my wallet is. I’m a pretty careful person in that regard.”

Minutes later, he got an email from Cheapo Records, saying they had found his wallet — sans his cash and credit cards. The employee contacted Jakshtis, who is a part-time real estate agent, at an email listed on his business card.

Later, Jakshtis found that the thief had spent his money at Walmart. He was able to dispute those purchases and cancel the rest of his cards.

Initially, Jakshtis assumed that he had dropped the wallet while off-campus the day before, and that the theft had simply been poor luck. But evidence to the contrary soon surfaced.

“I kind of played it at first as ‘Oh, my own stupid self, don’t drop your wallet,’” Jakshtis said. “Then, an hour later, my roommate came back and he said, ‘Hey, is this some bad joke? All my money’s gone, my credit cards are gone, and my wallet was dropped off at the LC [Leonard Center].’ He never touches his wallet — only when he drives and he never drives, really. It’s always in his room.

“That’s when I was like, ‘Oh my god. Someone probably came in here,’” he continued.

Unfortunately, five of the six roommates had been at practice that afternoon and the sixth had returned home to visit his family. Jakshtis estimates the room had been totally empty between 9:15 a.m. and 1:00 p.m.

“At the beginning of the year, we got an email actually saying, ‘Hey, your lock is really hard to open, FYI,’” Jakshtis said. “We tried it a few times and it takes like three minutes to really jam [the key] in, turn it, and then get it out.”

Since then, they had usually left the door to their suite propped open with the doorjamb. Nothing had happened until that Saturday.

All that being said, Jakshtis finds the detail that a stranger was seen following students into the dorm and filming them to be more disturbing than the theft itself.

“That’s a much bigger problem in my book than me losing a few hundred bucks,” Jakshtis said. “Someone walking in and filming people is a lot scarier. I hope they’re doing something about that.”

While the thefts may not be directly related to the individual caught following students into the dorms, Associate Director of Security Bill Collumbien suspects that the events are connected.

“The [campus security] officer who was following up on the theft report was reviewing video and observed the person following the individuals into the residence hall,” Collumbien wrote in an email to The Mac Weekly. “We have nothing linking the two incidents, they were listed on the same security bulletin and email because they occurred in the same place around the same time.”

According to Collumbien, Security officers interviewed the students who were followed into the dorms, including Jakshtis. They have also increased officers’ patrols in the residence halls and contacted other campus security departments at local colleges in search of potentially related intrusions.

So far, the St. Paul Police department has not been involved.

“In the case of the theft, we are not able to report a crime on behalf of the person who suffered the loss, they have [to] make the report,” Collumbien wrote. “With the trespass, there is very little information for St. Paul to investigate. If we develop any actionable information we will notify them.”

In an email to all residential students on Monday, April 22, Security provided the following description of the suspect.

“The suspect is described from video as a male, taller than 6’0”, thin build with black hair and beard (no mustache). The suspect was wearing a black and white baseball hat (with yellow logo), black and white hooded zip up Adidas sweatshirt, blue jeans, and white tennis shoes. The suspect also appeared to have tattoos on their right forearm.”

Collumbien encouraged students to take measures to protect themselves, fellow residents and their belongings.

“Lock your doors at all times,” Collumbien wrote. “Do not let strangers into the residence halls or allow them to follow you in after you unlock the door. Report suspicious persons, activity or crimes to Security and the police. If you see something, say something.”