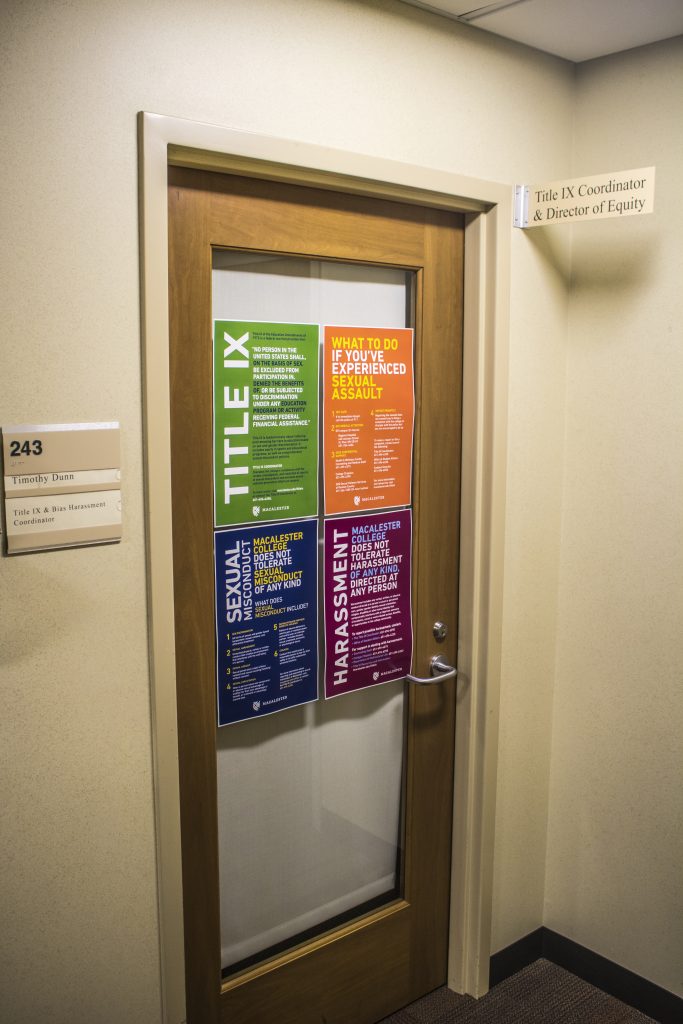 Update 4/26: on the morning of 4/25, President Brian Rosenberg announced in the MacDaily that Title IX, Bias and Harassment coordinator Timothy Dunn had decided to resign from his post, effective 4/30. As of 4/26, Macalester administration had no further comment on the circumstances of Dunn’s departure.

A report detailing the turbulent relationship between Macalester students and the Office of Title IX, Bias and Harassment arrived on President Brian Rosenberg’s desk on Friday, April 12.

The report’s author, MCSG President-elect Blair Cha ’20, has spent this past semester working on the document, which details 10 survivors’ experiences with the Office of Title IX and particularly Title IX, Bias and Harassment Coordinator Timothy Dunn.

In addition to the survivors’ stories, the nearly 30-page document also includes transcripts and emails from students’ interactions with Dunn and accounts of various student efforts made to improve relations with the Office of Title IX.

The report concludes with an assortment of The Mac Weekly articles Cha considers to have been “red flags” about problems in the office.

Cha began her work in late January as a growing group of survivors were becoming outspoken about their negative experiences with the Office of Title IX.

“The complaints [about the Office of Title IX] were spreading from outside the classroom to inside classrooms and from students to professors, from upperclassmen to underclassmen,” Cha said.

She hopes the report will offer the administration the chance to see the student perspective on the Office of Title IX and to take action.

“First, there was a slight push-back,” Cha said. “I think in any institution it’s hard to face change and face feedback. Ultimately, it reflects upon the administration’s… performance because they oversee Title IX. It goes back to: you didn’t listen to student problems earlier, failed to make an action, so now I’m doing this and you need to listen to it.”

After sharing the report with Dean of Faculty and Provost Karine Moe and Vice President for Student Affairs Donna Lee, Cha sent the report to Rosenberg. Then, on Monday, April 15, she and Better Sex at Mac member Sierra Campbell ’21 met with Rosenberg in person to discuss it.

Campbell said that the meeting went well, and they found him to be responsive to the criticisms in the report.

“I was a little unsure what his reaction was going to be,” Campbell said. “[But] he didn’t really question the validity or truth of it. It kind of seemed like he came in taking it all as truth — as peoples’ valid experiences, and he was mostly just asking us clarifying questions.

According to Cha, Rosenberg agreed to make a decision about what to do with the report by the end of the semester.

Over the past few months, Cha has made the report a top priority. She found herself working on the report during the day, while academics became relegated to odd hours.

“This felt as heavy as my academics,” Cha said. “I felt like this was my job to do, my responsibility. It wasn’t a lot of ‘why am I doing this’ self-doubt and it didn’t feel like a burden.”

She hopes that, in the end, these efforts pay off and the administration takes action — whatever form that may take.

“Whatever decision you [Rosenberg] make, I hope you keep students in mind first because Macalester exists for students, and you already knew this was going on,” Cha said.

As for what should come of the report, there’s one outcome on students’ minds.

“I think students want a termination, not going to lie,” Cha said.

“I think there’s just a huge distrust in Timothy’s ability and people not feeling supported by him,” Campbell said. “I think at this point that trust can’t be regained.”

When it comes to mending relations with the student body, Dunn said that finding a replacement for former Sexual Violence Prevention Program Coordinator and Deputy Title IX Coordinator Laura Linder-Scholer is essential.

“The Sexual Violence Prevention Specialist [SVPS] will be instrumental in improving relations,” Dunn wrote in an email to The Mac Weekly. “I adjusted the job description to give that person the authority to be more of an advocate and support. That person will also be designated as a semi-confidential resource. This means community members can go to that person for resources and support. And, the SVPS would only be required to report statistical information to the Title IX Coordinator.

“I also adjusted qualifications with the goal of hiring a Master’s level, experienced professional with counseling and advocacy skills.” Dunn declined to comment directly on the report.

“I cannot respond to the report without potentially breaching confidentiality,” Dunn wrote. “Therefore, I have no comment.”