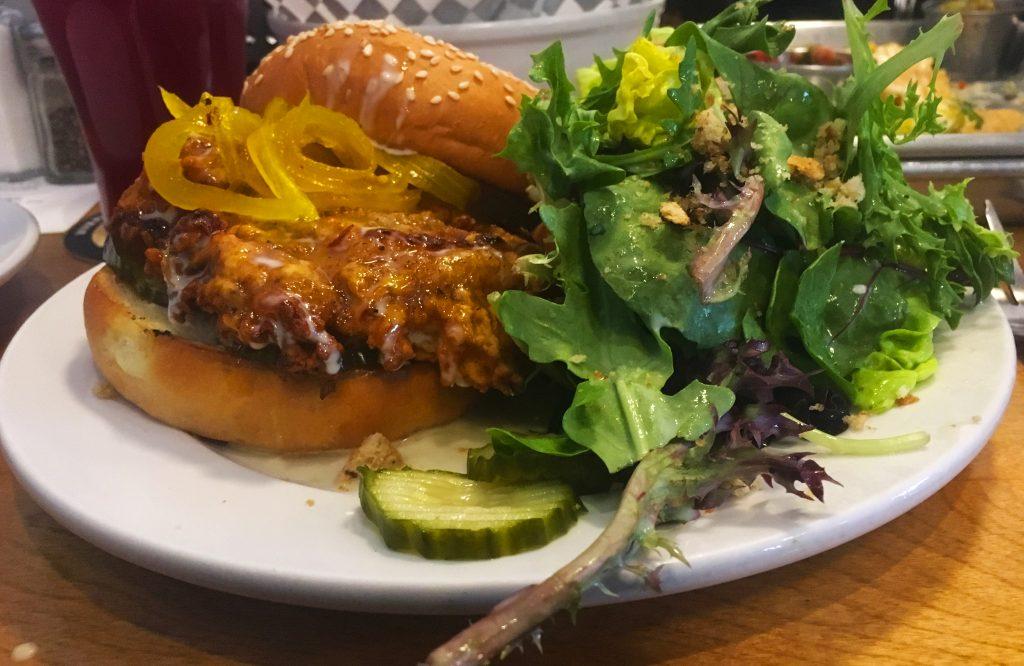 Tillie’s Farmhouse is just around the corner from Izzy’s Ice Cream and the University of St. Thomas. It’s a pleasant walk, particularly now that the weather is improving. It’s outside of the immediate “Macalester bubble,” so you aren’t going to make awkward eye contact with someone while trying to figure out if they sat near you in Principles of Economics first semester.

Tillie’s offers a casual dining experience with a focus on locally-sourced foods from around the Twin Cities. My friends and I went during happy hour (3-6pm weekdays), so we could try an array of $5 appetizers as well as several meals.

We ordered the Tennessee fries and nachos. The fries were pleasantly textured and crunchy with a surprisingly spicy aftertaste that was sweetly soothed by the warm beer cheese dipping sauce.

The nachos were fantastic and certainly the best value food we ordered. The tortilla chips were homemade, and the appetizer came with several sides: black beans, guacamole, salsa, crema and the same beer cheese sauce that the Tennessee fries used. The flavors worked really well together. It was a lot of food for $5 and certainly could have been a meal if I ate it alone. I will swing by Tillie’s during happy hour the next time I feel like having nachos.

My friends and I ordered tempeh, the fried chicken sammie and the bison burger. I first became interested in Tillie’s because they carry Eichten’s bison. Eichten’s is a meat and cheese farm in Center City, Minnesota which I have been to before when I visited my aunt, and I am confident in their treatment of the livestock and the quality of the animal products.

The burger has sautéed mushrooms, swiss cheese, bacon mayo, lettuce and tomato. The bun was soft and the flavors all complimented each other and highlighted the flavorfulness of the bison burger itself.

The burger was $13 which felt a little high for my college student pocketbook. However, I don’t have bison often, and I prefer to spend a little more in order to know that the meat I am eating was ethically produced. If you like bison, I highly recommend Tillie’s bison burger.

My friend who grew up in the South said that the chicken sandwich was potentially the best fried chicken that she had eaten outside of the South. It came with honey butter which is difficult to find on sandwiches in the northern United States and generally was a solid sammie. The fried chicken sammie is $12, which again is a little higher than many students would spend on a single meal, but it does imitate Southern cuisine. If you are hankering for some good fried chicken, it’s worth it.

The tempeh bowl was also good but could have used more sauce. The tempeh itself was pleasantly crispy and complimented the other flavors in the bowl. The bowl’s ingredients depend on the day and what vegetables are in stock. When we went there it had fresh saffron, carrots and other crunchy, flavorful things. The bowl was $12, and I probably wouldn’t order it again, but it was still enjoyable and adds a vegan option to the menu.

Overall, I really liked Tillie’s Farmhouse. The food was really tasty, although a little expensive. The sources of the meats and vegetables are clearly stated and if I am going to spend $20 on a meal and drink when I go out, I want to do it somewhere like Tillie’s where I know where the food comes from.