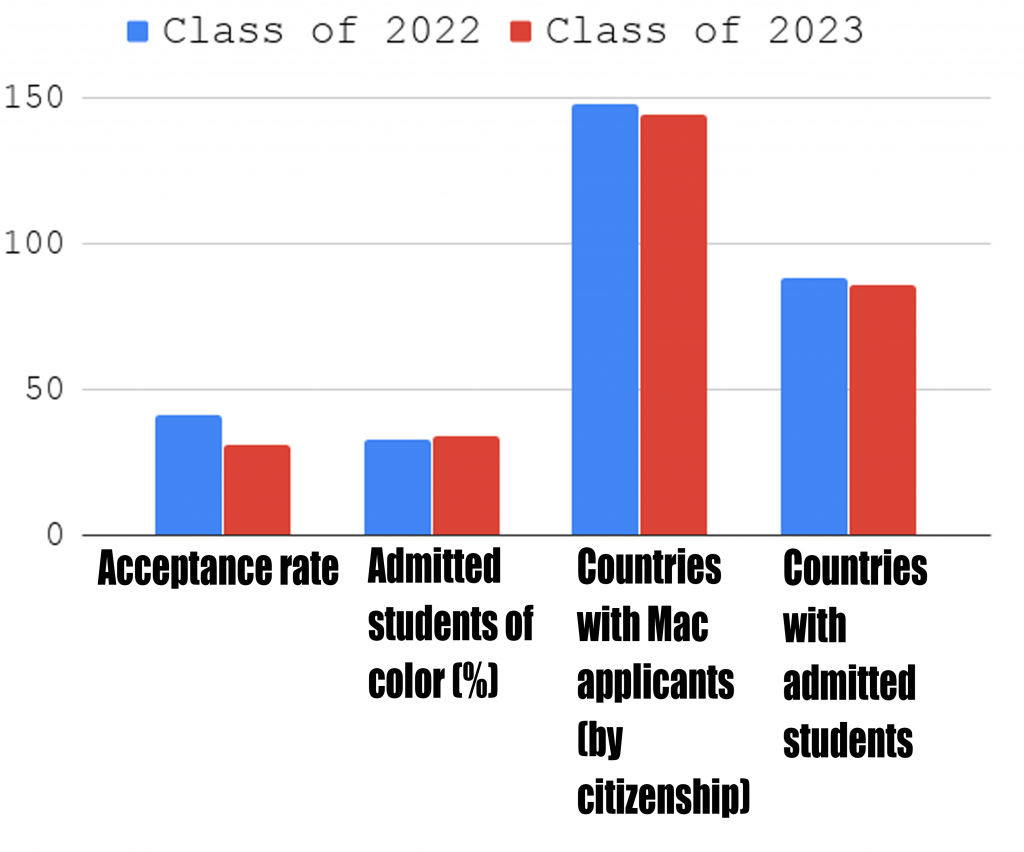 This year, students from 86 countries and all 50 states received offers of admission to join Macalester’s incoming class of 2023.

Due to a steep increase in the number of applications, Admissions saw the acceptance rate plummet to 31 percent from the 41 percent where it had stayed for the previous two admission cycles.

“To be honest, we’re not entirely sure [why],” Vice President for Admissions and Financial Aid Jeff Allen said. “We’re pleased by the growth. Relative to the previous cycle, I think we ended last year with 5,985 applications and this year received 6,598, so up about 10 percent.”

The increase in applicants and a lower target enrollment combined to result in the lower acceptance rate.

“In previous cycles, we’ve targeted 545 students [for] the entering class,” Allen said. “This year, our target is 515 in response to the very large first-year class that we enrolled last year. 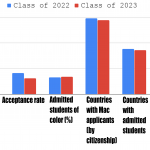 “The combination of receiving more applications for fewer spaces led to a year in which we were more selective, at least in our initial offers of admission,” he continued.

The admitted class of 2023 has marginally higher average SAT and ACT scores, but otherwise resembles previous admitted student cohorts in many ways. Minnesota, California, Illinois and New York remain the most common states of origin and the percentage of admitted domestic students of color rose by one percentage point.

“We want to identify and ultimately enroll students who can thrive academically, who can bring all of their academic gifts into the Macalester community,” he said.

“Of course, we are looking to maintain, enhance and build a more diverse and inclusive student community, and so racial diversity, ethnic diversity, geographic diversity, socioeconomic diversity, all matter,” Allen added.

Macalester’s partnership with QuestBridge, a national nonprofit that matches students from low-income backgrounds with colleges and universities, is one measure that the college has taken to encourage diversity in the student body. Allen attributes some of this year’s application growth to relationships that QuestBridge has helped facilitate.

“Not all of that growth can be attributed to QuestBridge, but some of it appears to have been more applications from students who were applying through the QuestBridge partnership,” Allen said.

This cycle also marks the second year that Admissions evaluated applications in a committee-based style — in which two admissions officers read a candidate’s file simultaneously in the same room before discussing it.

“What I appreciate about committee-based evaluation is that we all read files with our own biases, perspectives, histories,” Allen said. “Being able to read and process an application with another member of staff is a good way to check those biases and perspectives.

“I came from a community where I had 32 members in my high school graduating class — a small, rural, high school,” Allen continued. “Sometimes, when I read applications from students who attend what appear to be schools that are similar to my own, that can influence my thinking of that student [and] of that context.

“I think it’s so helpful to have other members of the staff who attended high schools with 800 students in their graduating classes and who can approach that file from a totally different perspective and we can talk about what we’re observing in the moment together,” he continued.

This year, Admissions has also experimented with Facebook Live sessions for admitted students. They also began holding “admitted student yield receptions” in San Francisco and Shanghai last year and have expanded those receptions to Seattle and Washington, D.C. in recent months.

Spring Samplers, two-day events for admitted students and their families to visit campus, remain the primary way for those students to engage with Macalester. Students attend classes, eat at Café Mac and often stay overnight in the dorms. Allen reported that “dozens and dozens and dozens” of students cancelled plans to come to the first Sampler on April 11-12 due to heavy snow. He anticipates that inclement weather won’t discourage students and families from considering Macalester, though.

Some families who missed the first Sampler plan to attend the second this weekend, April 18-19. Even without the unexpected influx of guests, the upcoming Sampler will be the larger of the two.

Per Allen, the program is “pushing the boundaries of what the campus can actually accommodate.”

Despite programming challenges, Allen hopes that prospective students will be able to connect with Macalester.

“The great part about Sampler is that the whole community participates,” Allen said. “Faculty open up their classrooms, faculty and staff from across all divisions of the college host information sessions, open office hours… so the great thing about Samplers is that families can come in and truly sample the Macalester experience,” Allen said.

“The Macalester community is a fantastic one and if you’re able to channel that energy, you have a good experience.”