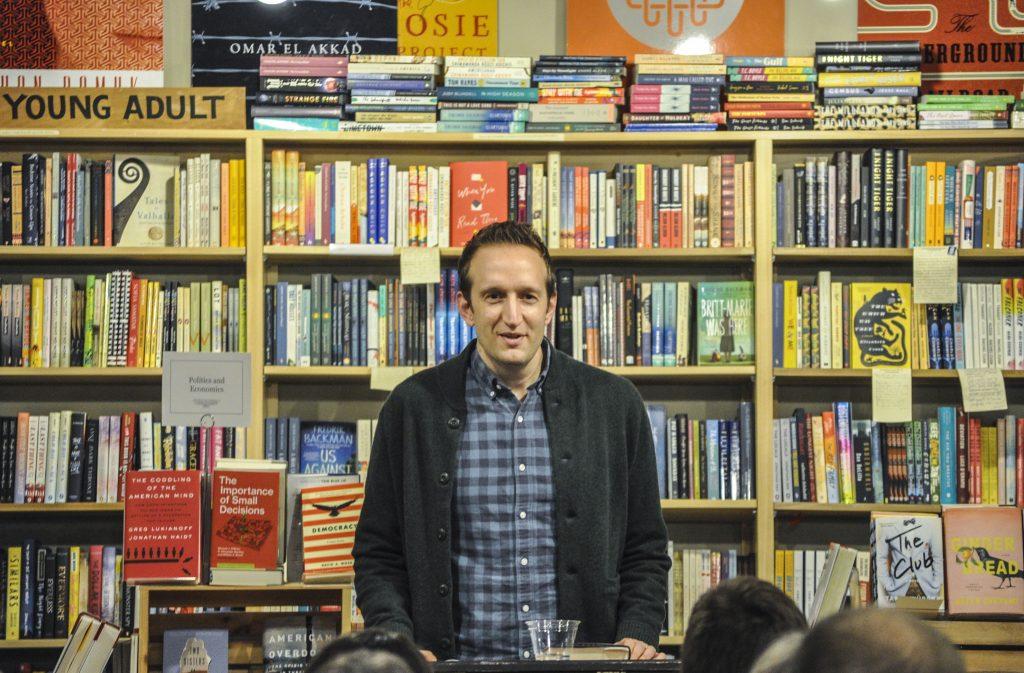 At his book launch, Macalester professor Peter Bognanni read excerpts from “This Book is Not Yet Rated,” which is his third novel and his second YA novel. Photo by Estelle Timar-Wilcox ’22.

On April 9, English professor Peter Bognanni released his third novel, “This Book is Not Yet Rated.” Common Good Books hosted the new young adult (YA) novel’s launch the following evening.

Bognanni introduced the novel and read a few excerpts. Ethan, the book’s movie-obsessed protagonist, tells the story of his job at a struggling independent movie theater. The novel also follows Ethan’s relationship with Raina, his closest childhood friend who has recently returned to his hometown after abandoning her career as a Hollywood actress.

“This book is dedicated to my father,” Bognanni said. “He’s the one who first really got me into movies — or films as I call them now that I’m a professor. We would go to matinees every Saturday… usually [to] the same movie. I think I saw ‘The Empire Strikes Back’ 32 times.”

To write about Ethan’s job at a movie theater, Bognanni drew on his own experiences of working at Minneapolis’ Oak Street Cinema.

“I was mostly selling popcorn, trying to initiate pretentious discussions with the customers who just wanted their Jujubes,” Bognanni said. “When I eventually quit that job… I was surprised how much I missed that place. It was one of the first jobs that I ever had where I felt like I had a work family.”

This idea of a work family inspired Bognanni.

“There’s a lot of teenagers who have experiences with that for the very first time, and it’s always… seemed both interesting and strange to me that we spend huge amounts of our lives with this sort of random assortment of people that have been brought together for a job,” Bognanni said.

Firsts, Bognanni said, are always compelling topics for YA books and teenage characters. “It’s a really high stakes time of life, and you feel like you’re inventing yourself from the ground up,” Bognanni said. “Experiences that might later in life be ones that you’ve had a hundred times… so many of them are the first time that you’re experiencing this thing, which makes the emotional resonance really significant.”

“This Book is Not Yet Rated” is Bognanni’s second book that has been marketed specifically as a YA novel. Though his debut novel was marketed for an adult audience, it also focused on a coming-of-age story. Bognanni started writing YA as somewhat of an accident.

“I just sort of wrote stuff and then people started telling me what it was,” Bognanni said. “And after that happened, I started reading a lot more of it and understanding how it worked as a genre.”

While writing “This Book is Not Yet Rated,” Bognanni was nervous about writing more autobiographically.

“I think the tricky thing about it was I would write a scene that was based on something that I had experienced… and then just second-guessing myself and thinking, is this actually interesting enough to be in a book or do I need to find some other way to fictionalize it?” Bognanni continued.

This was also Bognanni’s first book written under contract, which meant he had a deadline for turning in the first draft.

“I’m used to taking at least three years to write something, and I wrote the first draft of this book in a year,” Bognanni said. “[It] made me extremely nervous.”

However, Bognanni said this may have been helpful to his writing process.

“In some ways I actually think it helped to get a better draft,” he said.

“When I first started writing this book, I thought that it was just a friendship story, but then I figured out along the way that it wasn’t,” Bognanni said. “I was sort of resisting that a little bit, I think for the same reason my students often do, which is like they don’t want to fall into cliches.”

“I don’t know why I’ve been avoiding them. I think it’s just because you don’t want to accidentally write a Hallmark movie or something. You want to make them real,” he said.

Bognanni has some loose ideas for his next novel. Though the plot isn’t set yet, he knows what he wants to write about mental health with his trademark light and humorous tone.

“I do everything, but funny — mental health, but with jokes,” Bognanni said.

Assistant professor of English Matt Burgess, who introduced Bognanni at the book launch, told the audience about his recent conversation with Bognanni’s students.

“They said, ‘He makes me feel like a really good writer, and he really looks for the best in all of my work,’” Burgess said. “This is kind of a boring thing to say when introducing someone, but it’s just really true that Peter is just a good person.