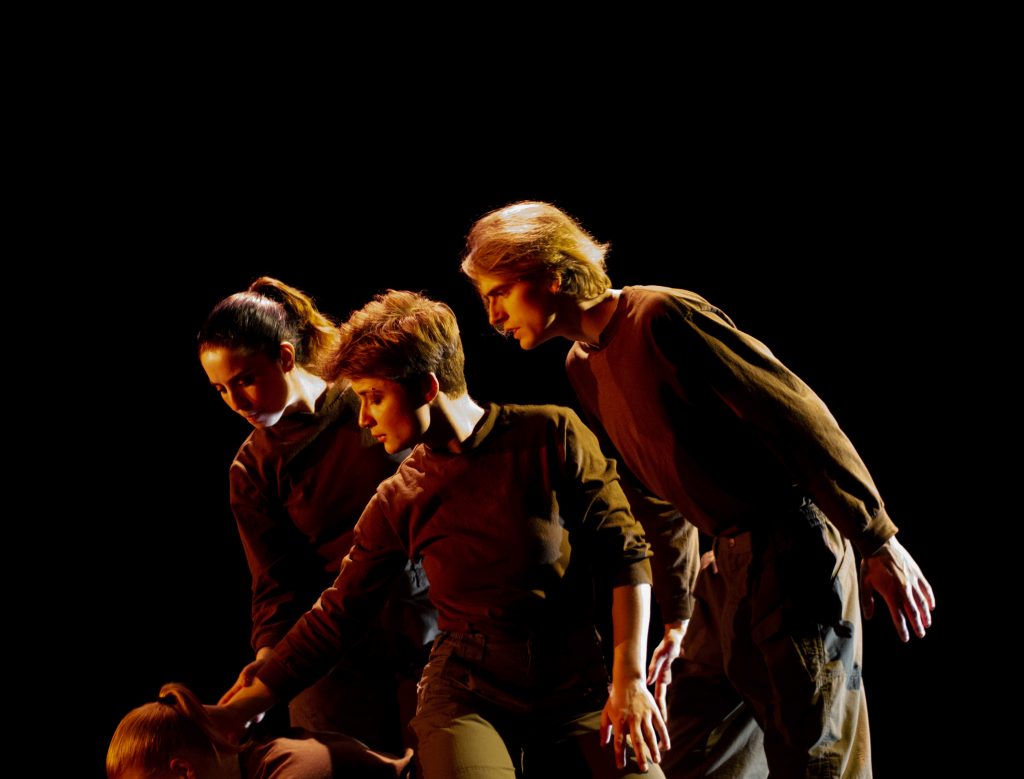 Since the new Theater and Dance Building opened its doors in January, a refreshing new era has begun for its namesake department. The annual Spring Dance Concert, “Open Despite,” ran from April 11 to 13. In opening remarks, choreographers Claire Grace ’19 and Midori Hasegawa ’19 recalled the strength and gratitude that the dancers, choreographers, faculty and production team had for both the Macalester community and the presentation of vulnerability in the show.

Seven choreographers, 11 lighting designers and three faculty members worked with over 30 student dancers for “Open Despite,” making it one of the largest dance shows in Macalester’s history. Despite the full ensemble, the performance took place in the Huber-Seikaly Theater, a small black box in the basement of the Theater and Dance Building. The space most fit for dance performances will be the mainstage Macalester Theater on the first floor, but it was not ready in time for “Open Despite.” Because of the smaller-than-anticipated capacity, every performance of “Open Despite” was sold out, even after an extra show was added.

The content of the performance was rich. Themes of personal struggle, preservation of culture and familial history inspired the six dances. The title, “Open Despite,” comes from the strength in the performance despite fear that might have once hindered their expression.

The first piece, a solo danced by Trina Hofrenning ’21, gave the concert a powerful start. Hofrenning choreographed the piece in her dance composition class last semester and added choreography for a longer, more thematic dance for “Open Despite.” Set to Yann Tierson’s series of “Hent” songs, which feature animal calls and drums, Hofrenning drew inspiration from personal hardships. “It works with ideas of pain, betrayal and loss. I see it as a range where at the beginning it’s kind of helpless and at the end it’s powerful,” Hofrenning said. The performance was intimate due to both proximity and Hofrenning’s slow but calculated movements in which she stared down the audience, inviting them into her confrontations.

Megan Rae Maguire ’19 choreographed the second piece of the concert, entitled “Steady Revival.” Maguire wanted the piece to deal with the complicated impacts of addiction and alcoholism and drew from the experiences of family and friends. “I wanted to create a piece that was for people who have experience with addiction or have loved someone who has struggled with those things and talk about how both of those things are difficult,” Maguire said. She saw her role as choreographer as an opportunity to offer something to the audience: “I wanted the piece to show the strength that I had when overcoming those obstacles and would give strength to someone in the audience who felt that they related to that issue.”

Composed of eight dancers including Maguire, the collaboration between ensemble and choreographer was central in the creation of the piece. They talked extensively about individual experiences and used those stories as inspiration for structured improv that Maguire then translated into choreography. “I couldn’t have done it without their collaboration,” Maguire said, “I wanted my dancers to have their own story that they were telling.” In order to challenge herself and to encourage more people to perform, Maguire worked with dancers that were less experienced. “I wanted to work with dancers who didn’t have strict technique training and different kinds of bodies, which was really interesting. I’ve been really impressed with the dancers who didn’t grow up dancing.”

Hasegawa’s dance also emphasized community building. She wanted to have as big an ensemble as possible in her piece to showcase diversity, “I wanted to focus on creating an accessible environment for dancers of color, especially international students. I tried my best to create a community. I wanted to do a big piece and make sure that, for example, Asian women are onstage dancing.” Hasegawa used childhood memories as inspiration. “My mom used to sing to me a lot and play with my hands and my hair,” she explained. She also used her dancers as collaborators, talking with them about stories she wanted to tell and then coming up with phrases of choreography. “I had a lot of really specific stories that I wanted to convey,” she said. Hasegawa used two different pieces of music, the first of which is unusual for dance as it is largely silent and missing musical counts. The second song was one that is commonly used in modern dance pieces, but as Hasegawa said, “because it is also such a personal piece, I wanted to use something that is already ingrained in my brain.”

The fourth piece stood out in “Open Despite” as the most dramatic but also most traditional. The choreographer, Fiona Adams ’21, drew inspiration from the sensual, theatrical “El Tango de Roxanne” from Moulin Rouge. Dressed in heeled character shoes and long black skirts, the four dancers in the piece stomped and clapped in a nod to flamenco dance. Accompanied by two others who partnered them and fought for the love of Maguire’s character, the piece was highly technical. Most choreography produced at Macalester falls in the style of ballet, lyrical, modern or contemporary dance, so the drama and technique of flamenco and broadway was unusual but refreshing in “Open Despite.”

In the fifth dance, Grace utilized five dancers dressed in brown pants and long sleeve shirts. The appearance of the dancers alone invoked a sense of anonymity, but coupled with the patterns of choreography, the focus of the work centered around group cohesiveness. Set to electronic music, the dancers had to understand one another in a way that moved beyond musical counts. As they often times moved during silence or seemingly random phrases of beats, the closeness of the group was an important part of the dance. Both the music and the choreography made Grace’s piece one of the more contemporary works in “Open Despite.”

The last work of “Open Despite” brought 13 dancers to the stage, where they performed an urban street dance piece set to a medley of music by a mix of popular musicians choreographed by Long Nguyen ’21 and Xuemeng Yao ’19. It was a feat to pull off such intricate line formations and movement around the small stage while also performing expansive hip hop moves. However, the dancers did not show any signs of intimidation and radiated energy through the fast-paced and uplifting dance.

Once the entire cast of “Open Despite” was on stage for the final bow, the incredible talent and diverse variety within the show became even more clear. Maguire reflected on how the experience of “Open Despite” has been different in comparison to other performances, “While I’ve been at Mac, this is the best show I’ve been a part of. Everyone’s pieces are so clean and artistically dynamic. The range of styles show that the department is moving in a new direction where we welcome different styles of dance and different backgrounds.” “Open Despite” highlighted the artistic strengths of Macalester students,