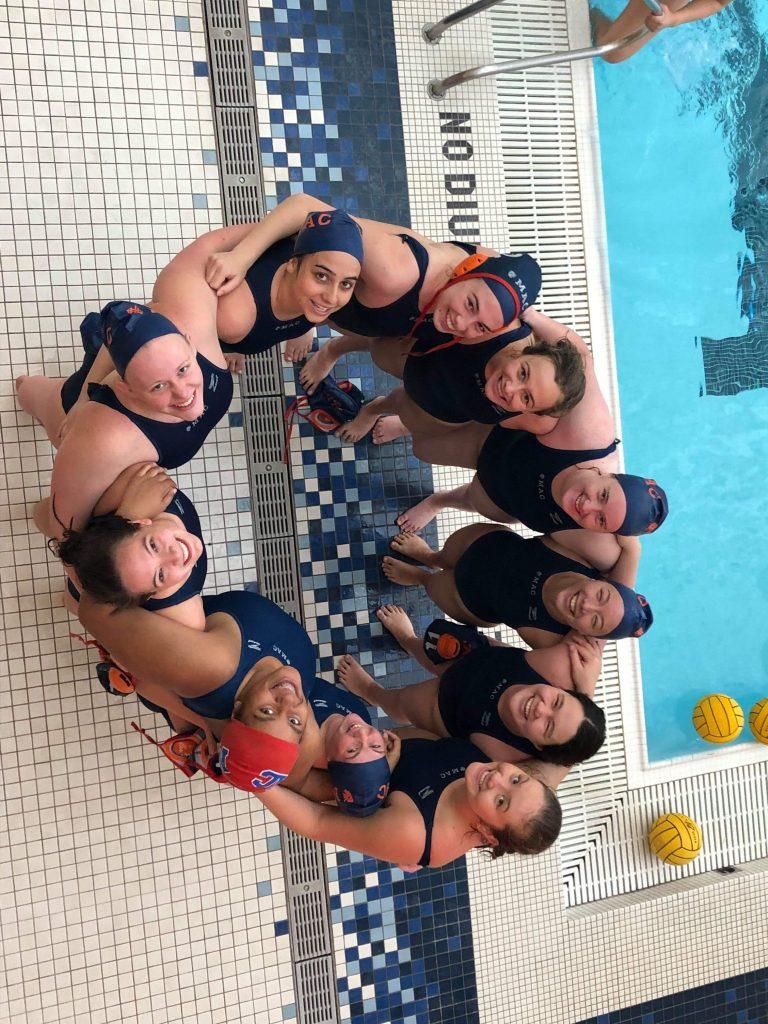 As the final seconds ticked off the clock on Sunday, April 14, the Macalester Women’s Water Polo team looked around and reflected on what they had just accomplished.

“There was a moment at the end, where I was holding the ball for the last 30 seconds and we were up by three, so we knew we were gonna win and we were all just sitting in the pool kinda waiting for time to run out, just looking at each other,” goalkeeper Courtney Overland ’19 said.

“That was a really special moment that I’ll remember forever. It was a moment to just appreciate each other, and I couldn’t have asked for a better team to end my senior season on.”

The Scots were bolstered by offensive duo Oriana Galasso ’20 and Cara Mullery ’21, who both recorded hat-tricks in the championship victory. But it was not a game, nor a season, defined by a few star players. Lucy Moran ’19 shared this team mentality.

“I really do think our team is great because we are a team,” she said. “If you look at the breakdown of scoring — especially the first and second game that we played at our conference championship tournament — the first game we had eight out of nine field players score goals and, in the second game, I think it was five or six [field players who scored]. So it’s really important to recognize how much of a team sport water polo is.”

Over the last three seasons, five of the seven starters have remained the same, giving the team the consistency needed to focus on developing as a coordinated group. For coach Scott Reed, losing three seniors who have been important members of the team during the three-year championship run casts doubt on whether this success can be sustained.

“We have to start all over next year,” Reed said. “It’s unfair to ask returning players and even the new first-years coming in to step into those roles that aren’t to their strengths. What we have to do is we have to once again go through the evaluation process in the fall [to] see what each person’s strengths are going to be and how they’re gonna work with each other and start from there.

“It’s kinda what Bill Belichick says: you have to start from zero every year and that’s what we’re gonna have to do,” Reed continued.

Maybe the Belichick comparison isn’t too far off. Belichick turned the Patriots, from a middling NFL franchise to a franchise with six Super Bowl wins, tied for the NFL best. Meanwhile, Reed took a program that went 11-14 in 2015 — the year before he took over — to a 17-6, record in 2017 and a CWPA Championship. Reed has now coached the Scots to three straight championships and two straight undefeated conference records en route to becoming a dynasty.

“By the time I got to my senior year and we had had two perfect seasons, I definitely felt like there was a kind of a revived target on our backs. We were kind of like the team to beat,” Moran said. “If anything, though, I do think that it motivates us to work harder, always.”

The team is not only incredibly motivated but also dedicated to helping all players grow as individuals in and outside the pool.

“That’s another thing that’s really unique about our team, is that we recognize that we want it to be a supportive environment instead of a competitive atmosphere — especially within the pool,” Moran said. “In a sport like water polo, you really, really rely on each other, and it can be easy to get frustrated at your teammates, but I think that our team is especially good about not getting angry.”

Overland, who joined the team in her sophomore year, echoed these sentiments.

“Everyone from the first practice on was super welcoming,” she said. “There was never any negative energy or like, ‘Why didn’t you [play] first-year?’ or ‘How come you’re only coming now?’ It was pretty much like, ‘We’re so excited to have you, welcome to the team, what can we do to make this transition easiest for you? This is our schedule, this is what’s normal, but we’ll work with you to make the transition easier, basically.’”

“The team dynamic is super supportive and I think that’s one of the biggest reasons why we’re so successful is that we don’t get down on each other. It’s always like we’ll get the next one and what can we do to make sure we’re better,” Overland continued.

“The big secret to this team success is everyone’s supportive of each other all the way from the top to the bottom,” Reed stressed, “Which is absolutely fantastic.”