The Mac Weekly goes behind the scenes at the Final Four 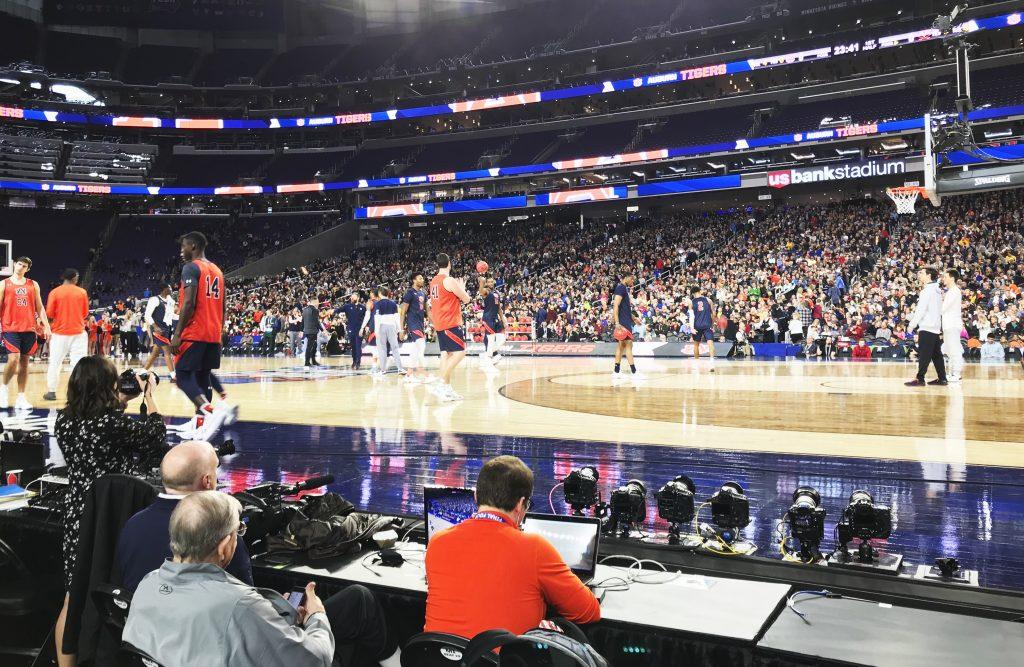 The Auburn Men’s Basketball team takes the court during their open practice for the Final Four at US Bank Stadium on Friday, April 5. Auburn lost their National Semifinal matchup against Virginia on Saturday. Photo by Matt Glover ’22

US Bank Stadium hosted the NCAA Men’s Final Four in Minneapolis from Friday, April 5 until Monday, April 8. The culmination of Men’s College Basketball March Madness tournament began with an open press and media day on Friday. The NCAA opened team practices to the public for the Final Four Fan Fest. It was a chance to see the teams practice on the court at US Bank Stadium and see the Reese’s NCAA College Basketball All-Star Game. The Mac Weekly was given the unique opportunity to attend and report on media day and open practices.

US Bank Stadium, which is normally home to the Minnesota Vikings, transformed into a basketball court for the weekend. Roughly half of the stadium was open to the public on Friday for open practices and the All-Star Game. Fans from all across the country packed the stadium, eager to see the four teams — Auburn, Michigan State, Texas Tech and Virginia — on the court practicing.

At the press conferences, Auburn head coach Bruce Pearl described how his players were feeling upon reaching the school’s first-ever Final Four berth.

“They’re walking around with their jaws dropped”.

On Saturday, the teams played in front of over 70,000 fans — an attendance record for US Bank Stadium. Auburn and Virginia squared off in the early game. Pearl’s team could not translate their early excitement into a win. Auburn lost on a controversial foul that sent Virginia’s Kyle Guy to the free throw line in the final seconds to eventually put Virginia up 63-62.

Texas Tech and Michigan State played in the later game, which was much less controversial. The Texas Tech Red Raiders won 61-51 to secure their first-ever NCAA tournament championship game appearance. It was a low scoring affair with both teams achieving well below their season averages. This was no surprise because the teams were both top three ranked defenses in the country this season.

Texas Tech has seen a turn around in recent years under head coach Chris Beard. Beard took the team from a 153rd ranked team in 2015-16 defensive efficiency to a 7th ranked team in 2017-18. This year they had college basketball’s top-ranked team in defensive efficiency. Beard not only turned around the defense, but he also has led the Red Raiders to their best finish in the NCAA Tournament two years in a row, bringing them to the Elite Eight last year and the championship game this year.

The Texas Tech Red Raiders are also notable for their international players, with student athletes hailing from Italy, France and the Dominican Republic. Looking to next season, they have committed athletes from Russia and Cameroon. Josh Mballa, a freshman forward from France, spoke about how the team has welcomed him, since he enrolled.

“Ever since I got on campus, they treated me like family, so I felt great once I stepped foot over there, and I mean, just to have the diversity of the guys on the team you know it just [makes] us closer, and you know it’s good to have people from other places on the team,” he said.

In the championship game held on Monday night, the Virginia Cavaliers defeated Texas Tech in overtime 85-77. It was a thriller that saw Texas Tech overcome a 10 point second half deficit to force overtime. The Cavaliers win was quite the turn around from last year’s disappointing first-round exit from the tournament.

Last year, the Cavaliers became the first-ever regional one seed to lose in the first round. They fell to sixteen seed University of Maryland, Baltimore County. Winning the National Championship, just over a year later, was a storybook ending for a team that made history in the wrong way last year.

Virginia Head Coach Tony Bennett spoke often about using last year’s historic loss to drive his team to get to the National Championship game. He knew they would have to face that loss and use it to motivate them. “We had this quote ‘If you learn to use [the UMBC loss] right, it’ll buy you a ticket to a place you couldn’t have gone any other way,’” Bennett said, after winning the National Championship. “And that, I think, was the case.”