Brunch at Town Talk Diner is savory and sweet 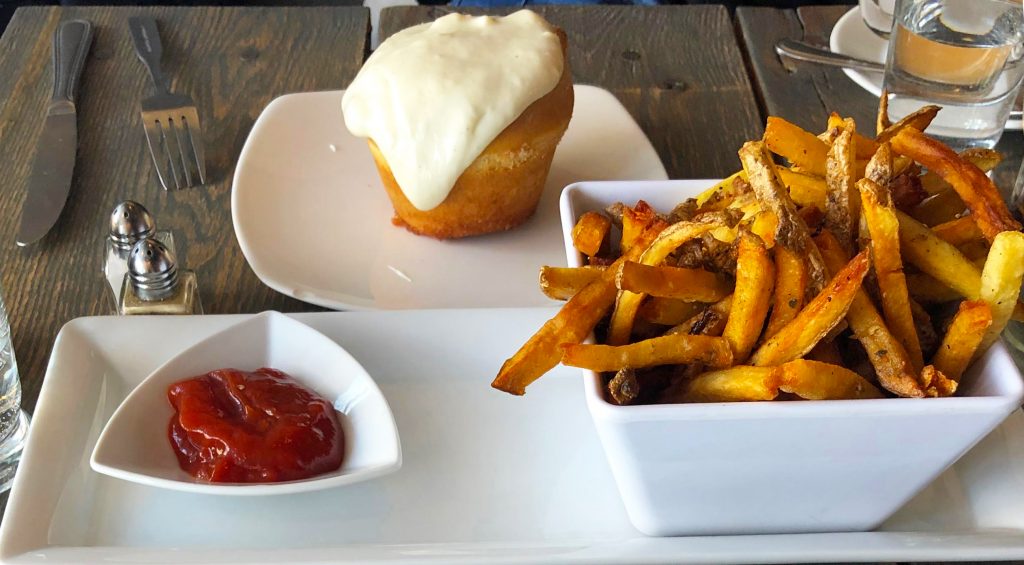 A field trip to the Trylon Theatre on the 21 bus brought me to the intersection of Minnehaha Avenue and Lake Street, where I found the Town Talk Diner. It was freezing and windy, so I didn’t do much exploring, but I think there was a Target across the street. Down the block, you can find Moon Palace Books and a few cute art shops.

The restaurant looks somewhat run-down from the outside, but upon entering Town Talk, you see a nice looking, dark wooden bar. Unfortunately, because it was early, and we were on our way to a school function, we didn’t test the cocktails.

My friend and I were seated quickly and handed a relatively short but varied menu. There were no vegan options and no marked gluten-free options, but the waitress told me that they would be able to put something together for us if we needed (we did not need).

We decided to share the TTD Benedict ($16), which had toasted bread, slow roasted pork, poached eggs and hollandaise sauce. It was rich and complex, and the hollandaise truly tasted like cheese (which is a good thing, in my opinion). I would definitely eat it again. The benedict came with a side salad which was surprisingly great, as far as side salads go.

We also got the warm cinnamon roll with cream cheese frosting ($5) and fries to share ($6). The cinnamon roll was awesome —the roll itself was on the denser, breadier side, and the icing had a lot of vanilla in it that made it decadent. The fries were fine, but not anything special in terms of flavor or crispiness. I don’t think I’d order them again.

Some other items on the menu that I was unable to fit into my stomach include a BBQ brisket hash ($16), black bean chilaquiles ($15), cinnamon French toast ($14) and vanilla creme brûlée ($8).

The space had a kind of ‘new-industrial’ feeling, with hanging light bulbs, exposed brick and visible pipes. Service was great, and the staff was really friendly. Overall, it was really good but more expensive than I was up for, and I’m not in any particular rush to go back.