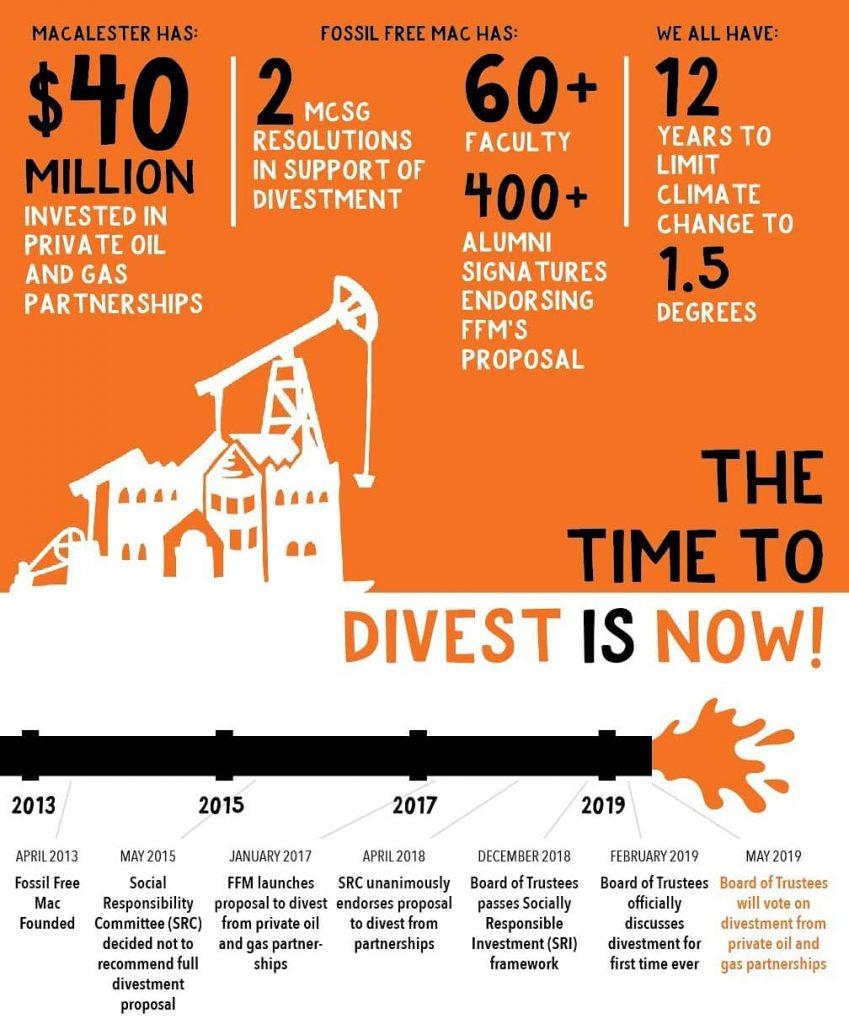 Fossil Free Mac (FFM), seeking student feedback and support before the board of trustees debates their proposal in May, hosted a town hall on April 1 in the John B. Davis Lecture Hall. The student organization is asking the board to place a moratorium on Macalester’s private partnerships with oil and gas companies.

After classes Monday afternoon, approximately 30 students gathered to watch the presentation, which began with a review of the history of FFM and the changes the organization has undergone.

The group was founded in 2012 seeking full divestment from the Carbon Underground 200 — the top 100 oil and top 100 gas public reserve holders — which Macalester invests in via mutual funds. In 2017, they changed their ask to specifically placing a moratorium on the $40 million Macalester has in private oil and gas partnerships.

The board of trustees is currently debating this new proposal. While that conversation has already begun, FFM has yet to receive feedback directly from the board members.

“The board of trustees had their retreat in February and decided not to tell us about what happened at it,” FFM core member Sasha Lewis-Norelle ’21 said. “We did talk with President Brian Rosenberg about this and he gave us the feedback that [the board is] not concerned about the financial argument anymore, they’re more concerned about the efficacy of divestment and whether or not taking only $40 million out of fossil fuels will do anything to the enormous fossil fuel industry.”

FFM responded to this and other board arguments during the town hall.

“Historically, divestment campaigns have worked… the [anti] apartheid movement worked,” FFM core member Emma Harrison ’21 said. “Foundationally, a divestment campaign is about making it unethical to invest in something, that’s the first part of it.”

Harrison added that Macalester should be at the forefront of this ethical movement.

“A moral, ethical institution like Macalester College, which is renowned for its dedication to civic engagement and service to society, should not be endorsing an ethical framework that on the flip side while composting on campus, is invested in fossil fuels,” she said.

The group also responded to the concern that if the college divests from fossil fuels, it will find itself on a “slippery slope.”

“There’s an administration worry that there’s a slippery slope of divestment — that if we divest from fossil fuels, that we would have to divest from everything that anyone finds objectionable and that would overall have a bad effect on the endowment,” FFM core member Hannah Shumway ’19 said.

“Our gut reaction to that is, ‘Would it be so bad to divest from bad things? No,’” Shumway began.

But FFM also disagrees with this argument on a logistical basis. They point to the Macalester College Board of Trustees Guidelines for Investor Responsibility, which the board passed earlier this year. The guidelines set up both a process for groups who want to propose divestment and a system for the board to evaluate these divestment proposals.

“There’s definitely precedent for how these things are handled at this point, so we don’t see some sort of crazy slippery slope happening,” Shumway said. “If there are other students that come with really well-thought-out proposals for divestment, we all think they should all be considered as seriously as our proposal has been considered and the board can make that decision on its merits and not worry about a slippery slope.”

In addition to presenting their organizational goals and responding to board concerns, FFM also discussed the questions they frequently hear from students — including the concern that divestment could negatively impact financial aid at Macalester.

“The financial aid question is probably the thing we hear most often from students and that’s something we’re definitely really concerned about answering,” Shumway continued. “It’s a big question for us, personally. We all receive financial aid at Mac and we want people to know we wouldn’t advocate for something we thought would hurt student financial aid or make Mac less accessible.”

However, based on their research on the endowment, the group is confident that financial aid will be relatively unaffected by divestment.

After the presentation, the core members took further questions from the audience about their experiences with the board of trustees, the economic complexities of their proposal and Macalester investment at large.

Following this gathering, FFM is also pursuing adding a student referendum to the ballot for the spring MCSG elections on April 22. The group will propose the referendum at MCSG’s April 9 meeting and the Legislative Body will vote on that proposal the following week.

Should MCSG approve adding the referendum to the ballot, students will be able to vote either in favor of or against divestment. While the referendum won’t directly approve the proposed moratorium, the vote would act as a representation of student support for divestment, which FFM could share with the board of trustees for their consideration.

Based on their conversations with Rosenberg, FFM believes there’s a chance they’ll be able to attend the board meeting in May to defend their proposal and answer questions. The results of the referendum would be an essential part of that presentation.

“I think the comments and questions we hear from students energize and inform what we say to the board,” Shumway said. “So with this town hall and possible upcoming referendum through MCSG, what we’re really trying to do is show that not only are we passionate about this — those of us who work on it every week — it’s also something that the broader student body cares about and it’s an important issue to people beyond us.”

And while FFM eagerly awaits the board deliberation in May, they say that even a commitment to divestment won’t be the end of the road for their organization.

“We have been pretty strongly assured that we will be their main topic of conversation and we will have an answer by graduation,” Collin Dobie ’19 said. “That’s not to say that if the board does exactly what we want that Fossil Free Mac will drop off the face of the earth next year.

“There are probably always going to be climate justice issues, environmental justice issues, institutions doing things with their money that we’d rather they not do,” he continued. “Fossil Free Mac will continue to hold Macalester accountable to its values.”