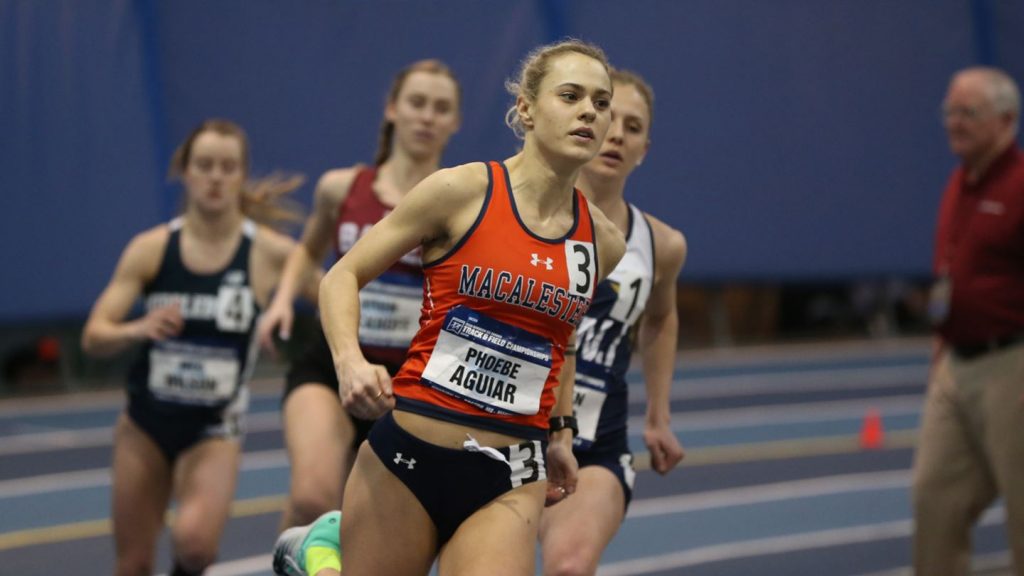 Phoebe Aguiar cruised to win the 800-meter at the 2019 NCAA Division III Indoor Track and Field Championships with the third fastest run of all time. “I was hoping for it, planning on it and training for it the past couple months,” Aguiar said. “I feel accomplished.”

Upon entering her freshman year at Macalester, Aguiar never expected to break the MIAC records, let alone win a national title. Following Indoor Nationals, Aguiar told her coach, “I came in running a 2:20, and I didn’t think it was possible for me to run a sub 2:20.”

From a young age, Aguiar always knew running would be her sport. “My parents both ran so track has always been a big thing in my family. I wasn’t really good at anything else. I don’t have great hand-eye coordination, but I’m really good at running, so I knew that was where my athletic skills were,” Aguiar said.

Starting to run in her freshman year of high school, it took some time for Aguiar to find which event was her calling. “I ran the 100- and 200-meter in my sophomore year, but I was having a lot of issues with injuries and my coaches suggested that I just try running an 800-meter just to see what could happen,” she said. “I ended up being really good at it and I got here and that’s what I focused on for the most part. I kinda had to do it.”

On her decision to go to Macalester, Aguiar was not only looking for the opportunity to run but also somewhere where academics were also a priority. “I knew I wanted to go to a liberal arts school. I wanted a coach that would let me study abroad… Track was not the deciding factor, but it was definitely a big contributor,” Aguiar said.

Aguiar’s ascent to the top of the podium was anything but smooth. In her sophomore year she had a torn labrum which required surgery. Aguiar’s recovery time coincided with her semester abroad. She noted, “I think it would’ve been really frustrating to [be back on campus] not being able to run, or run as fast as I was used to… I thought about not coming back after my surgery just because it’s tough, and I had a really tough two years of being injured and not doing well and being really frustrated but I think I made the right choice.”

Aguiar came into her senior season with even higher expectations. “Last year, it was about making it to nationals and this year it was winning,” she noted. “I knew I would make it, so it was just a matter of placing as high as I can.” Looking back at the previous season when she won silver at Nationals, Aguiar said that it “was a big shock. I’d say it was a bigger surprise to everyone than winning this year. Just because I ran so much faster than I ever had and definitely came in not a favorite to do that, but it definitely made me want it more [this season]. It wasn’t a disappointment to come second, it was a huge accomplishment… It was really good motivation.” When it comes to motivation, Aguiar did not have trouble finding it in-season. “The nice thing about running is… it’s pretty black and white, it comes down to time so just being able to get my times down.” While Aguiar will be graduating from Macalester in May, in the fall, she will compete in Division I for Syracuse University while pursuing her Master’s in Public Policy. “Next year I’ll be doing this but at a much higher level so I got to do the best I can now to get myself to a place [where] it is more competitive [where] people are that much better so that’s been a pretty easy motivator,” Aguiar said. On her goals for Division I, Aguiar believes the training will be even more intense. “I’ll be a lot more committed to it… I think it’s pretty similar, it’s making it to nationals, being an all-American, just at a different level. After I would want to get enough exposure that I could consider running professionally,” Aguiar said. Looking towards the future, Aguiar has more than just Division I in her sights. Next year, as Aguiar runs at Syracuse University, she will look towards the upcoming Olympic games. “Just to qualify for trials, that would be amazing, just to have that experience, and trying to see how far I can take this,” Aguiar remarked.