Income inequality, student activism and the evolving fight for economic justice at Mac 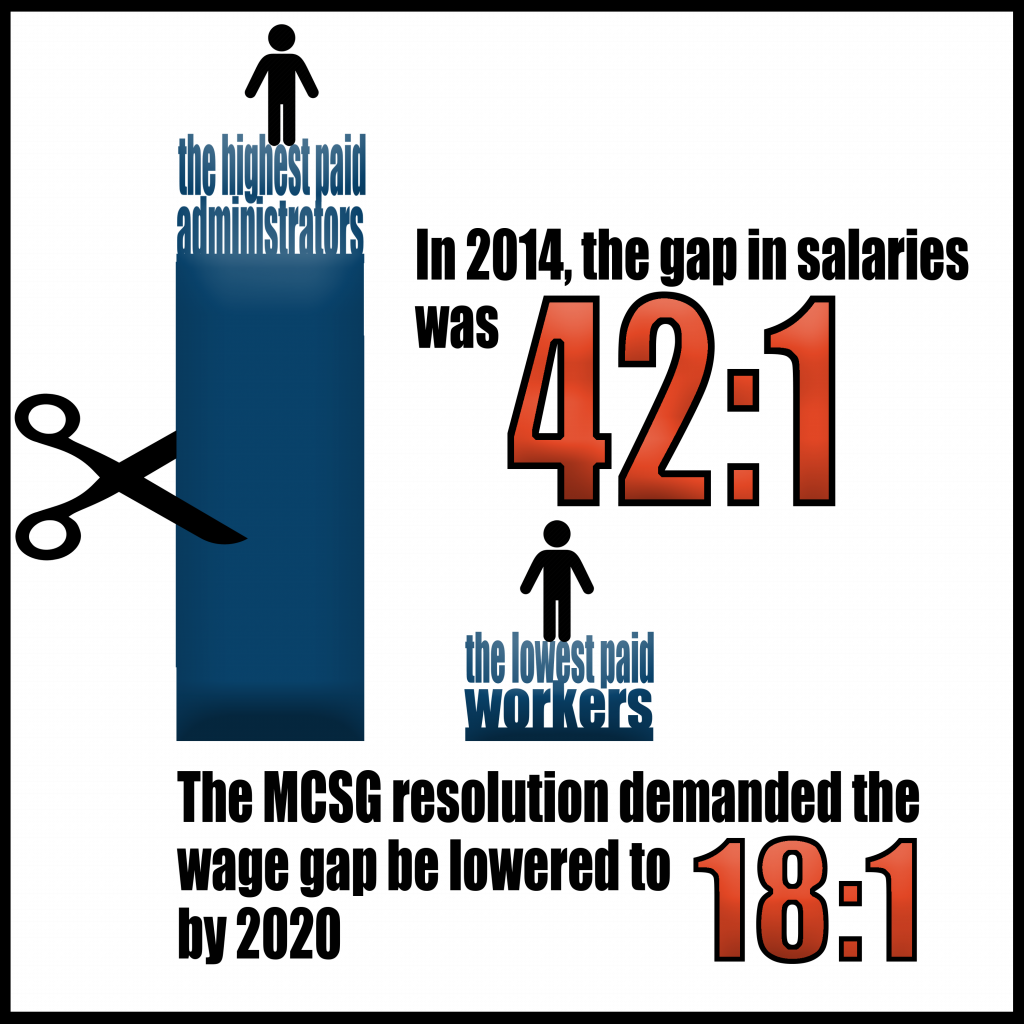 After three years of dormancy, the Income Inequality Commission (IIC) is beginning a new life at Macalester with new priorities.

The commission was born in 2015 out of an MCSG “Resolution to Address Income Inequality.” Written by a group of students from the now-defunct MPIRG Economic Taskforce, the resolution committed to lessening the disparity between the salaries of the highest-paid administrators and wages of the lowest-paid subcontracted workers — like those at Bon Appétit.

This would involve raising the minimum wage of subcontracted workers to $15 and lowering Macalester President Brian Rosenberg’s annual compensation from $795,664 to $530,000 — the median compensation of college presidents in Macalester’s 40-school peer group.

The resolution created the IIC to oversee the completion of that goal. However, since the beginning, the commission has struggled to even convene, let alone begin tackling institutional income inequality.

“I think the main thing that we wanted to get out of the commission was really a framework for it and something MCSG could build off of and create greater impetus for later,” resolution co-author Patrick Blomgren ’17 said. “Obviously, in later years, that hasn’t happened.”

Michalesko was appointed to the first iteration of the IIC and immediately sensed resistance to the resolution from his co-committee members.

“I think there were some vocal defenders of the president for sure at the student assembly and possibly they were also the people who chose the people on the commission,” Michalesko said. “All I know is the first meeting I was like, ‘Okay, so we should get our plan to the board of trustees,’ and people were like, ‘Do you really think that’s a good idea?’”

During the inaugural year of the IIC — the 2015–2016 academic year — the commission made no progress toward the resolution’s ultimate goals. By the next academic year, things had become even more complicated.

Valerie Hallberg ’19 applied and was appointed to the 2016–2017 IIC. When she arrived at Macalester that fall, Hallberg expected the group would receive instructions from MCSG. They never did.

“I contacted the other students that had been selected and emailed back and forth with them and they hadn’t heard anything either,” Hallberg said. “All that was really in the job description was that we were supposed to meet twice a month and discuss based on Macalester’s resolution for income quality. But it didn’t really say how.”

After a few more weeks of silence from MCSG, Hallberg stopped receiving messages from the other students on IIC as well. Then, in November of 2016, Hallberg’s health began to decline and pursuing the IIC was no longer feasible.

“At this point, I contacted the students to meet, I haven’t heard anything from Macalester, I don’t feel well, this is something I’m just going to have to put down right now,” Hallberg said. “At the time it was something I had to do but it’s something I really regret not following through with it. For all of my good intentions getting in with this, I wish, if I could go back, I had done things differently.”

By the end of the fall 2016 semester, the IIC was effectively dead. While MCSG appointed students to the committee for the following academic year, that group never convened either.

Today, one year before the resolution’s 2020 deadline, the IIC is no closer to that 18:1 ratio.

It is by no means, however, the only group that has tried and failed to tackle income disparity at Macalester.

For example, last year, MPIRG started a vocal campaign to include a $15 minimum wage for subcontracted workers in Macalester’s new contract with Bon Appétit. The campaign culminated in a town hall discussion on wages last April, but since then it has fallen comparatively silent.

The Mac Weekly reached out to the current coordinator of this campaign and received no response.

Jessie Miller ’16 worked as a student manager in Café Mac from September 2014 until May 2016. In February 2016, she organized a protest for workers’ rights when Bon Appétit ended their contract with a labor provider, Opportunity Partners, and nine employees lost their jobs in Café Mac.

Like the IIC and MPIRG, she and her co-organizers also struggled to get Macalester administration to take action and were ultimately unable to get those employees their jobs back.

Miller, who was a vocal critic of classism and elitism at Macalester, has a theory as to why student activists have often failed to get income inequality movements off the ground.

“I think there’s been quite a bit of anti-racism activism at Macalester the past couple years… that seems to be decently successful,” Miller said. “But let’s be real, Macalester students care more about racism than income inequality. Don’t get me wrong, I’m not saying that that’s a bad thing. It’s not. But you also have to realize that income inequality and race are very tied.

“Being a first gen college student, being working class and being a student of color are all very tied things,” she continued. “There’s a missing link of that intersectionality that people haven’t really thought through.”

According to Miller, the fact that many Macalester students come from high-income backgrounds contributes as well.

“Who really cares about talking about income inequality when you come from wealth?” Miller asked.

“Part of it, frankly, is that I feel like it’s such an invisible subject to a lot of people — that we interact so much with workers who clearly aren’t getting paid what they should be,” he said. “It saddens me to a great extent that it’s not a bigger issue that more people care about.”

The new iteration of the IIC is designed to raise awareness about economic disparity among staff and students alike.

After conversations with the Kofi Annan Institute for Global Citizenship, Student Affairs and MCSG President Malik Mays ’19, Ortiz reimagined the IIC as a campus committee focused on addressing the needs of students from working class and poor backgrounds.

Echoing Miller’s sentiments about classism at Macalester, Ortiz said that the college can often be a frustrating place for low-income students.

“The only things I can speak on are my personal experiences as a low-income student,” Ortiz said. “I think there’s a lot of disparity in the classrooms and assumptions being made about students who are low-income and what they should already know when coming onto this campus.

“I want to help students feel ready to actually be prepared to take on financial burdens that come with being an adult and come with living on your own,” Ortiz said. “Whether that be problems with housing, or problems with filing taxes, or problems with not receiving funding for certain opportunities, or not being able to access different organizations outside of Macalester because you can’t afford to go there.”

She plans on hosting a forum this spring for students, staff and faculty to come together to talk about some of the goals for the new IIC.

“I want this to be an open and safe space for any student — whether they’re low-income or not — to talk about the problems they see that income does influence,” Ortiz said

Ortiz wants to honor the original intent of the IIC as a wage justice organization. However, as local minimum wage laws evolve, it has become necessary to rethink the organization’s goals. Because St. Paul passed a $15 minimum wage ordinance in November 2018, Bon Appétit is already planning on raising wages in Café Mac.

According to Bon Appétit General Manager Amy Jackson, last summer, Bon Appétit management sat down to figure out how the new laws would affect their staff. In this exercise, they raised the lowest-paid employees’ wages to $15 and then altered the rest of their staff’s wages proportionally to avoid wage compression.

“Do we have official plans in place? No,” Jackson said. “But have we gone through the exercise and do we know what the implications are going to be? Yes.”

This change could open up the IIC to focus on support, rather than activism.

Hallberg agrees with the new missions of the IIC, and shares a vision for a student group whose main goal is to provide support for low-income members of the Macalester community.

“My first year at Macalester I worked three jobs, and it almost killed me because I was taking 18 credits, three jobs and I was volunteering at the same time,” Hallberg said. “I didn’t have a single second to take for myself. It’s the part that kind of frustrates me about the pressure within the Macalester community.

“We should care and try to minimize the gap in income,” she said. “But also recognize the social gap in accepting people who are trying really hard and maybe don’t look or have as much time or sound like somebody else who has more privilege.”

With aspirations to change the game for low-income students at Macalester, Ortiz hopes the new IIC will learn from the mistakes past and find success in its new identity.

“I have big hopes for this,” Ortiz said. “I’m hoping that this is not going to be another attempt to make it into something and then have it die out again.

“I think this is a problem a lot of students are trying to speak about a little more actively, so hopefully, by this time next year it’s going to be a super active committee and we’ll have done some great things.”