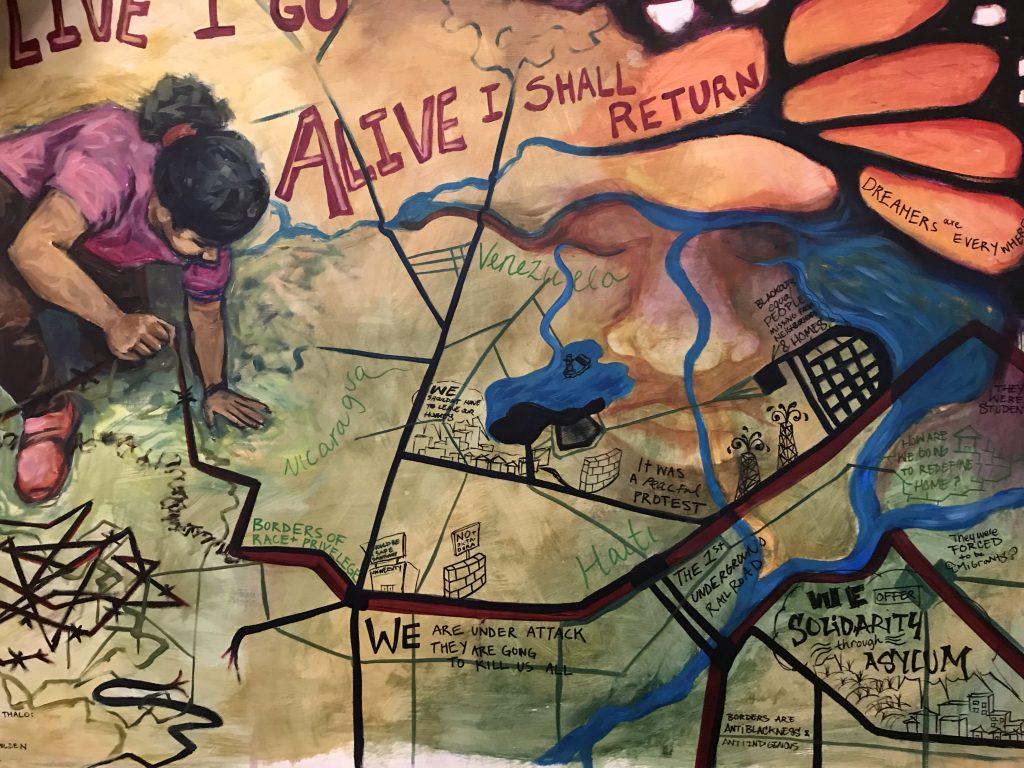 “This symposium is taking place at a time when border crossings and movements of people have intensified within Latin America, Central America and the United States,” Latin American studies department chair Olga González said in her opening remarks.

“… crossing is far from the end goal for migrants seeking refuge and opportunities in another country,” she continued. “For most, successfully crossing the border does not mean the border is left behind.”

The symposium itself consisted of two panels with an hour lunch break in between.

The first panel, titled “Dislocations and Xenophobia at the Margins of the State in Latin America,” looked at historical and current migration patterns and the political responses within Latin America — specifically Venezuela, Nicaragua and the Dominican Republic.

Each panelist had 20 minutes to present on their area of expertise. New York University Assistant Professor of History Alejandro Velasco spoke first, using the history of Venezuelan migration to contextualize current events.

“Venezuela is very much in the news,” Velasco said. “That has to do with not just the most recent kind of state of crisis but this longer trend — in [a] sense an accumulated crisis now spanning twenty years.”

“The migration issue in Venezuela went from being not even of interest … to being a key driver of both the domestic and increasingly geopolitical landscape shaping events in Venezuela,” Velasco said.

For Chamorro, who is Nicaraguan, this issue hit close to home.

“In the span of a few weeks, my generation, the first post-war, post-revolutionary generation born into peace, learned to distinguish between gunshots and mortar explosions,” Chamorro said. “Words like AK-47 and Dragunovs became a part of our popular vocabulary.”

As the panelists spoke, a group of mural artists captured phrases and themes from the presentations, painting a visual documentary of their work. The trio make up Studio Thalo, a collective of artists based in South Minneapolis that works with organizations and groups focused on community outreach, social justice and activism. The mural will be exhibited once González finds a permanent home for it.

After the panel spoke and took questions from the audience, the symposium broke for lunch, during which several students and faculty members co-facilitated a series of lunch conversations based on themes of the symposium. González stressed the importance of student involvement in all aspects of the process, from organization to execution. She believes the lunch conversations encouraged student participation.

“I think that we also wanted that inclusivity in the role that students would play conceptualizing… [and] in the execution of the symposium” González said. “So probably it took more time than it would have taken if we just did it in a more conventional way, but I think it was worth it.”

The second panel, titled “Visible and Invisible Borders at the Center of the State(s)” began just after lunch and focused on the United States-Mexico border and how it currently impacts families and migration patterns to the U.S. Bryn Mawr College assistant professor of sociology Verónica Montes, the first panelist for the afternoon, spoke about the Central American caravan and what it symbolized for the migrants.

“In this case, [migrants] wanted to become visible because they were reclaiming their right to take this particular route, to be safe,” Montes said. “That was very important for them.”

University of Minnesota Assistant Professor of Gender, Women and Sexuality Studies Lorena Muñoz and University of Nevada, Reno Professor of Anthropology Deborah Boehm both discussed the impact of family separation at the border. Muñoz presented an aspect of her post-tenure project, which draws on accounts from her own family members, many of whom have crossed the border themselves in search of work, leaving small children behind.

“This is a very small part of a larger project that I have about family separations, particularly focusing on the children that are left behind, from Zimbabwe, in South Africa and then in comparison with Mexico and the United States,” she said.

Boehm focused specifically on family separations within broader immigration policy. She highlighted aspects of mass-incarceration and legal discrimination. Boehm has observed proceedings connected to Operation Streamline, a zero-tolerance policy which has lead to the prosecution of migrants through the U.S. legal system.

“Essentially what they have committed in terms of a felony is that they… are trying to get back to their families. So this gives you a sense of how this whole apparatus that criminalizes people has been built up,” Boehm said. University of Minnesota Assistant Professor of Art Xavier Tavera Castro, the final panelist of the day, began by showing his photography from a journey along the U.S.-Mexico border. His photographs capture moments in the lives of immigrants, highlight the tactics of the U.S. Border Patrol and examine the border landscape.

At the end of his talk, Tavera Castro introduced a newer project that focuses on similar themes.

The project consists of a series of portraits of Mexicans dressed up in ways that echo pulp science fiction from around the world, with the point being to play with the way in which they are perceived to not belong.

After this the symposium adjourned to watch Mi Peru- Minnesota, a Peruvian dance group, and learned about several traditional Peruvian dances.

“[We closed] the event with migrants, who are bringing their version of what it is to be in the United States for them and showing how they transmit through dance the way they feel about home,” González said.