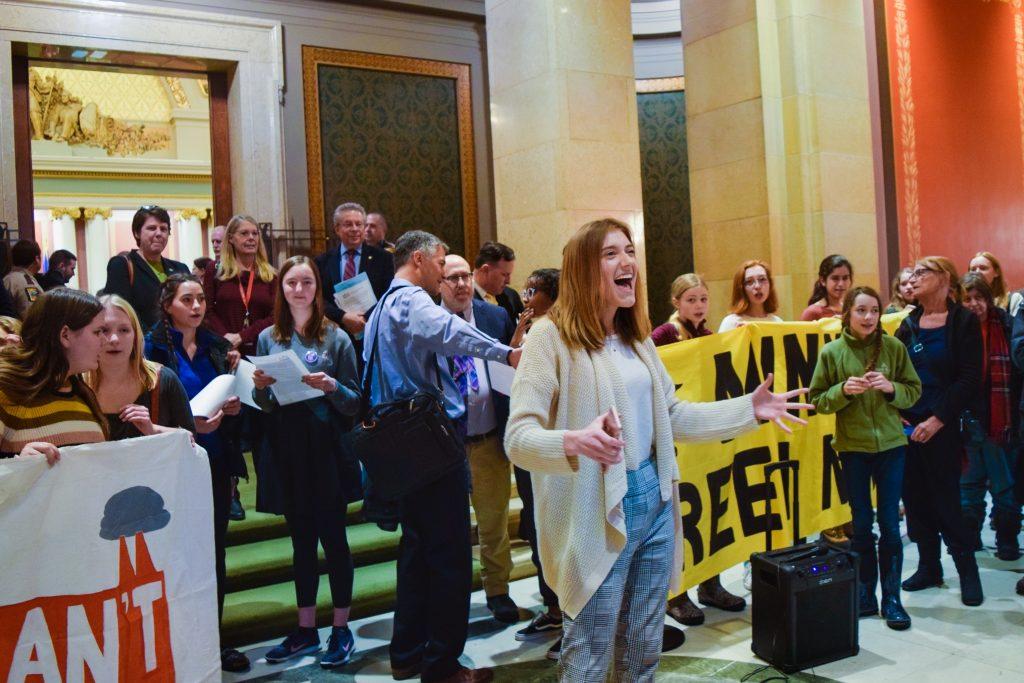 Members of the Twin Cities hub of the Sunrise Movement attended a rally at the Minnesota State Capitol on Monday in support of the Minnesota Green New Deal. The event was organized by Minnesota Can’t Wait, a youth organization that champions bold climate action across the state, and co-hosted by nine other environmental and social justice organizations from around the Twin Cities.

The event featured high school speakers from Minnesota Can’t Wait, who shared stories about their experiences with climate activism. In between speakers, chants of “We need a Green New Deal!” echoed through the capitol rotunda.

The rally culminated in State Representative Frank Hornstein (DFL) ’81 announcing his plans for a Minnesota Green New Deal in the Minnesota House of Representatives. The Minnesota Green New Deal would follow the outline of the proposed national version, and it aims to eliminate all fossil fuel emissions within 10 years. If his bill gains enough support to pass, it could be the first of its kind in the United States.

Sunrise Movement was founded in April 2017, with a mission to mobilize young activists, people to advocate for bold climate action. Their main goal is to mobilize support for Green New Deal legislation by cultivating the power of young people through grassroots activism.

“The youth piece is very important because people generally respond more positively to young people coming forward about issues,” Sunrise Movement member Julia Fritz-Endres ’19 said.* “Something Americans respond to on both sides of the aisle is intergenerational equity and protecting their children. The Green New Deal presents a lot of new rhetoric that is focused on hopefulness and building a future with no one left behind.”

“We frame climate change as a thing that affects young people,” Sunrise Movement member Adam Marquardt ’22 added. “Because people our age will be the ones alive when the worst effects take shape.”

The rally was planned in conjunction with the Stop Line 3 movement, which aims to prevent Enbridge, a Canadian multinational energy transport company, from building a new Line 3 crude oil pipeline across a large swath of the Midwest.

The proposed Line 3 pipeline runs through the ceded territories of five native tribes in northern Minnesota. The new line would double the carrying capacity of the existing pipeline. According to the Final Environmental Impact Statement on the project, the line would produce the equivalent of 50 coal power plants’ worth of greenhouse gas emissions.

The rally began outside the House Chamber on the second floor of the Minnesota State Capitol building. Once the legislators left for the day, advocates moved to Governor Tim Walz’s office to voice their opposition to the pipeline. A representative from Walz’s administration was present.

On the campaign trail, Walz pledged to stand against pipeline construction in the state, stating in August 2017 on Twitter that: “Any line that goes through treaty lands is a non-starter for me.”

However, environmental groups feared he would not keep his word.

This past June, the Minnesota Public Utilities Commission (PUC) granted Enbridge a Certificate of Need and Route Permit to build the new pipeline. The Minnesota Department of Commerce (DOC), along with five indigenous tribes, Friends of the Headwaters and Honor the Earth began an appeal process against the PUC’s decision. The DOC started the process during the former Governor Mark Dayton’s term in office, but some worried that Governor Walz would not continue the appeal. On Tuesday, however, Walz said in a news release: “When it comes to any project that impacts our environment and our economy, we must follow the process, the law and the science.” For the Sunrise Movement members in attendance, the event provided an opportunity to voice their support for legislation that began on the fringe of the American political system but is slowly making its way into the mainstream.

The Green New Deal, in the eyes of its supporters, represents an equitable transition to an 100 percent renewable energy economy that creates millions of jobs in the process. The Sunrise Movement sees the ambitious climate justice proposal as a bare minimum necessity to mitigate the effects of global warming, but also a means of stimulating job growth for future generations and reducing economic and social inequalities.

A study by the U.N. Intergovernmental Panel on Climate Change (IPCC) forecasts that, if nothing is done to reduce emissions by 2030, the Earth will warm an average of 1.5 degrees Celsius, which would inflict massive costs to society.

According to the report, preventing these changes requires a 45 percent reduction of global greenhouse gas emissions from 2010-2030 and zero net emissions by 2050.

On Dec. 10, the Sunrise Movement held a sit-in protest in Washington D.C. to push high-ranking politicians to support the Green New Deal and take drastic action to curb climate change. Sunrise Movement member Linnea Henrikson ’22 participated in a sit-in at Nancy Pelosi’s office during the event and was one of 61 people arrested. A statement from the Sunrise Movement’s website said that more than 1,000 people were in attendance.

“Everyone should be involved in this fight,” Henrikson said, “because it’s going to affect everyone in the future, somehow, in some way.”

“The Green New Deal benefits everyone except oil executives,” Marquardt said. “Not only is it going to clean up the country, but it is also going to create hundreds of thousands of good jobs in the process through green infrastructure, which will help us avert the crash we’re heading towards as a result of current economic policies.” Rep. Alexandria Ocasio-wCortez (NY-D) and Senator Ed Markey (MA-D) have championed the national Green New Deal, and 67 House members have signed on to co-sponsor the bill.

“In my personal opinion, when it comes to policy proposals, anyone to the right of Alexandria Ocasio-Cortez is basically useless,” Marquardt said. “At the point that we are in in American politics, we need to push the limit of what is seen as politically viable far to the left.

“What is politically possible is mostly determined by perception,” he continued, “and so policies are seen as unrealistic because they are perceived to be unpopular. In reality, there is more support for the Green New Deal than people think.”

Marquardt’s beliefs are not unfounded. A December 2018 poll by the Climate Change Communication department at Yale showed 81 percent of polled voters support the idea of a Green New Deal.

The Sunrise Movement sees the Green New Deal as a potential salve to the unstable economy. The Green New Deal hopes to accelerate this wage growth and reduce economic inequalities through the establishment of comprehensive renewable infrastructure.

The transition toward 100 percent renewable energy will come with tremendous financial burdens.

A Feb. 13 article by Greg Ip of The Wall Street Journal estimates the cost of implementing 100 percent renewable energy in the U.S. at $2.9 trillion, which he works out to $83 per metric ton of carbon dioxide cut.

This figure does not take into account the energy-efficient renovations to buildings that are also proposed by the bill, which may also be expensive and time-consuming. Though the plan requires a monumental financial investment, Fritz-Endres believes that Minnesota is poised to reach complete divestment from fossil fuels in the near future.

According to the Minnesota Department of Commerce, 24.9 percent of Minnesota’s energy was generated from renewable sources in 2017, an increase of more than 300 percent from 2007 (8.9 percent). Renewables are now the second-leading source of energy in the state after coal, which has seen a significant drop from 59 percent to 39 percent over the same period.

“In Minnesota, there is already a push to adopt wind and solar. We can continue to grow our renewable energy economy while decreasing our reliance on fossil fuels,” Fritz-Endres said.

“If Governor Walz and Lieutenant Governor Flanagan decide to go forward and tackle the 100 percent renewable plan, they could be seen as great leaders in this movement and gain a lot of political support,” she continued.

Macalester Sunrise Movement realizes it can only do so much to fight global warming, and they hope that the general public will grow to support the Green New Deal. “Whatever the opponents of the Green New Deal will find inconvenient is much preferable to the catastrophes that we will see in the future if we do not act,” Marquardt said. “The looming threat will hopefully be enough to enact some kind of change.”