Lydia X. Z. Brown talks life in academia at the “margins of margins” 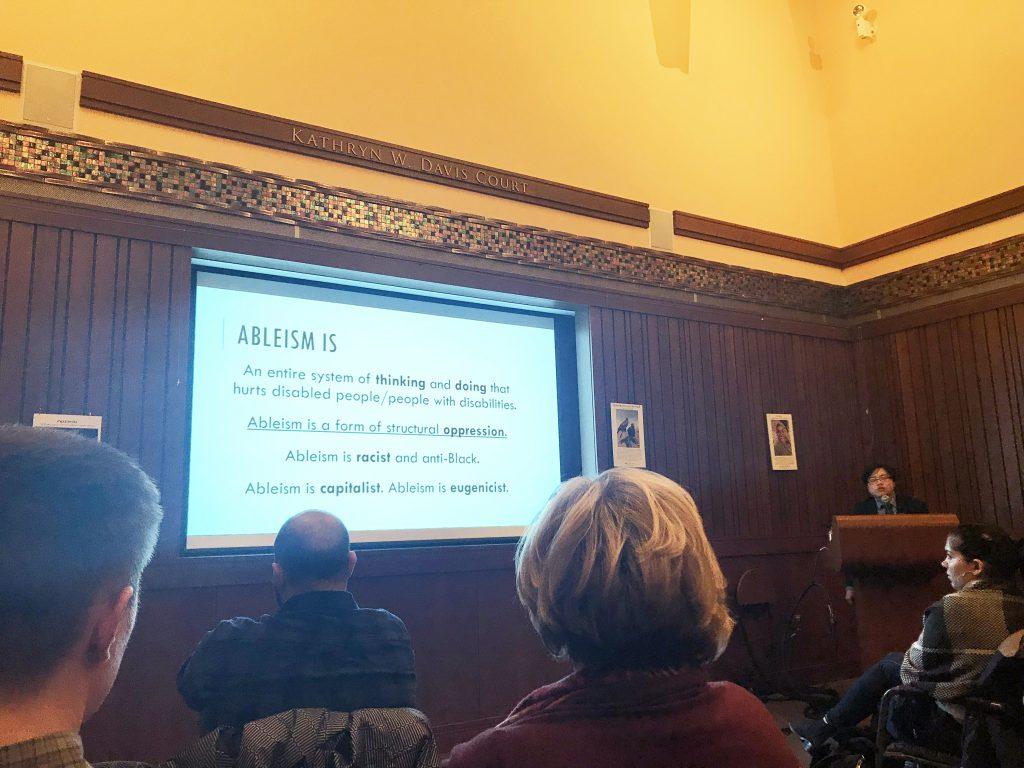 The talk, titled “Cripping Intersectionality: Neurodiversity and Disability Justice,” addressed the unique issues presented by the intersection of disability and other marginalized identities.

The talk was co-sponsored by the psychology, American studies and women, gender and sexuality studies departments, Disability Services, the Department of Multicultural Life (DML) and the Kofi Annan Institute for Global Citizenship.

Brown, who is foremost a disability justice activist, writer and lawyer, centers their work around the violence and systemic institutionalization and incarceration of disabled people of color. They are the lead editor and visionary behind “All the Weight of Our Dreams,” the first-ever anthology of art and literature from people of color with autism.

Once taking the floor, Brown drew the audience’s attention towards the gravity of violence inflicted upon disabled people of color, citing the history of the Judge Rotenberg Center (JRC) in Massachusetts. The JRC is a residential “school” for persons with developmental and intellectual disabilities.

According to Brown, the practice of torture against the disabled at JRC grew more prominent through the use of the Graduated Electronic Decelerator (GED), an electric shock device more powerful than a police taser.

The GED has been used on approximately half of all patients confined in the JRC since 1988, Brown explained: a process that remains completely legal.

“In the history of disability – of understanding what it means to be a disabled person in the United States, and even more broadly, globally – is also a history of what it means to live targeted by an ableism that cannot exist without underlying capitalism, white supremacy and patriarchy, Brown said. “These things work together to create places like the JRC.”

Brown noted that the JRC’s demographic is almost 85 percent people of color and remains disproportionately black and Latinx.

Brown’s focus extended past the issues of any single institution, instead exemplifying the JRC as an extreme case within the broader issue of the mass criminalization of black and latinx neurodivergent people.

Brown’s talk fixated on those with multiple marginalized identities, who, they said, are often at risk of the most perverse forms of abuse and oppression in the United States. According to Brown, those living at “margins of margins” should be leading the conversation about social justice and liberation in America.

“When we talk about disability justice, not just disability rights or disability awareness, we are talking about a need to understand these multiple interlocking systems of violence as necessarily dependent on … one another to exist,” Brown said.

They noted the ways that systemic ableism ties peoples’ worth to their productivity and ability to move and communicate in “socially acceptable” ways.

Psychology professor Joan Ostrove, who introduced Brown at the beginning of their lecture, hopes the presentation will further the conversation about disability justice on campus.

“I’ve assigned [Brown’s] work in my courses and was familiar with some of their writing – I knew that it was powerful and offered a very social justice-oriented framework for thinking about disability,” Ostrove said. “I think that’s the kind of thing that Mac students engage with deeply but that we don’t have a lot of public discourse about.”

Brown emphasized the particularly nefarious ways that ableism presents itself in academia, drawing from personal experiences at the Northeastern University School of Law. During the presentation, they recalled the lack of belonging they felt in an academic space due to their varying marginalized identities.

“The talk was incredibly fueled by their own experiences and their own passion, and that it takes everyone to dismantle ableism and other forms of oppression,” Dylan Larsen ’20 said, who attended the event on Friday.

“This is the kind of work that we should all be striving to do in building justice and access-centered movements and community,” Brown said, “Work that acknowledges that we have a communal and collective responsibility to labor in solidarity with one another in order to create and build these communities that we want.”