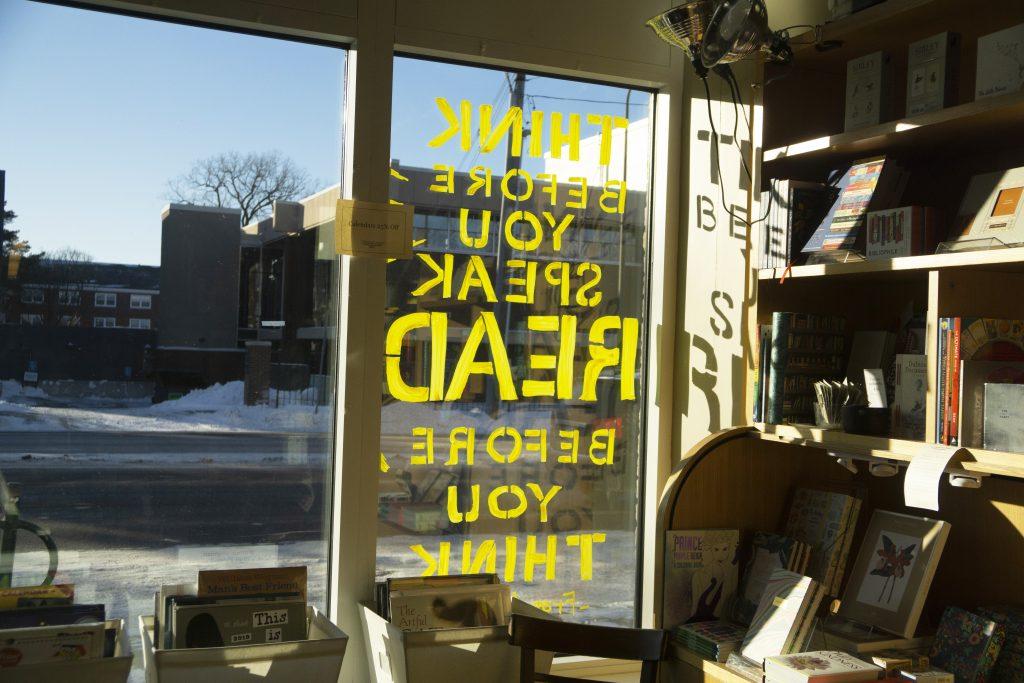 The Macalester campus, visible from inside Common Good Books. Photo by Summer Xu ’20.

The campus-adjacent Common Good Books has been a pillar of the Mac-Groveland community for 12 years but has suffered significant losses following sexual misconduct allegations against Keillor that surfaced in November 2017.

Minnesota Public Radio terminated its contract with Keillor at that time on the basis of his “inappropriate behavior,” which included dozens of instances of unwanted touching and the verbal and written harassment of a female colleague. Keillor has routinely denied his actions were inappropriate.

A later investigation into Keillor’s behavior revealed additional instances of sexism and sexual harassment throughout his 49-year career, including the harassment of a former Common Good Books employee while she was a student at Macalester.

The store faced significant backlash from the Macalester community following these revelations, and many students opted to boycott Common Good Books entirely. Manager David Enyeart said that dwindling sales are one of Keillor’s reasons for selling.

“Our sales are down, that’s certainly been the case,” Enyeart said. “Garrison has retired, so he’s not in a position to own a business. And that combination of things has made it useful to look for new ownership.”

“In the best-case scenario, there won’t be significant changes,” Enyeart continued. “We’re an existing bookstore, so what’s desirable about us is that a new owner won’t have to come in and start from zero.”

Enyeart said that Common Good Books has been in contact with interested parties but hasn’t decided on a buyer or settled a timeline for the sale. The store’s location in the Macalester-owned Lampert Building means Macalester’s High Winds Fund will have some say in the new ownership.

“If a new owner comes that will keep a bookstore there, I think that would be great,” High Winds Fund Director Deanna Seppanen said. “I think having a bookstore in the neighborhood is something that people value. It benefits the college, and it benefits the students of the college.”

The High Winds Fund itself has been the subject of criticism from students following the allegations against Keillor, with some students upset that Macalester had not made an attempt to terminate its real estate relationship with the store.

“Once the news broke about Garrison Keillor’s sexual misconduct, I remember feeling very frustrated, like a lot of the student body, that Macalester was keeping its partnership with the bookstore,” Lane Centrella ’21 said. “It didn’t represent our values,” she continued. “We like to think Macalester adheres to a certain code of ethics, and it felt like they were violating that code.” According to Seppanen, the High Winds Fund did not pressure Keillor to cede ownership.

Centrella isn’t convinced. “At the very least, write a letter condemning it,” She said. “There are lots of ways Mac could have responded and didn’t.”Some students and professors are hopeful that without Keillor’s involvement, the store will become a space they feel comfortable patronizing again.

“I do really like the fact that Common Good Books offers so many opportunities for Mac students, in terms of employment and in terms having the opportunity to get their work out there if they’re creative writers,” Miriam Moore-Keish ’19 said.

Moore-Keish had a book of poetry published her sophomore year and found that Common Good Books was an extremely supportive local resource, and one of only a few independent bookstores that stocked her work.

“It’s mostly only in Barnes & Noble and on Amazon,” she said. “But [Common Good Books] has been really supportive of Mac students who have gotten things published. It was lovely that they were open to that.”

Moore-Keish said she hasn’t had anything to do with the store since the allegations against Keillor broke. “For me, I can’t speak for all of Macalester, but I feel a little uncomfortable there,” she said.

She’s not alone. English department chair Andrea Kaston-Tange, a self-proclaimed lover of bookstores, wrote in an email to The Mac Weekly that she too “stop[ped] patronizing the store as an individual to a large extent” following the termination of Keillor’s contract with MPR.

“I truly hope that Common Good [Books] thrives after this sale,” Kaston-Tange wrote. “I think that disassociation from Keillor will only be good for it as a business. I feel very strongly that it is an extremely good thing to have an independent bookstore in that location, which is prime not only for the surrounding community but also for being a conduit for helping the Macalester campus connect to that community.”

That attitude seems to be a common thread across campus. “I’m excited about it,” Moore-Keish said. “Change is always good … I’m interested to see what the new management does with their resources and the community because I think people are eager to get involved again with Common Good Books.”

Enyeart expressed hope for the sale to occur as soon as possible. In the meanwhile, he said, Common Good Books can only “keep being the best bookstore [it] can be.”

“We’re proud of the work we’ve done here in the store and we hope to be able to continue as much of that as possible,” Enyeart said. Until then, he said, it’s “business as usual.”