Rosenberg on mental health, his salary and leaving Mac 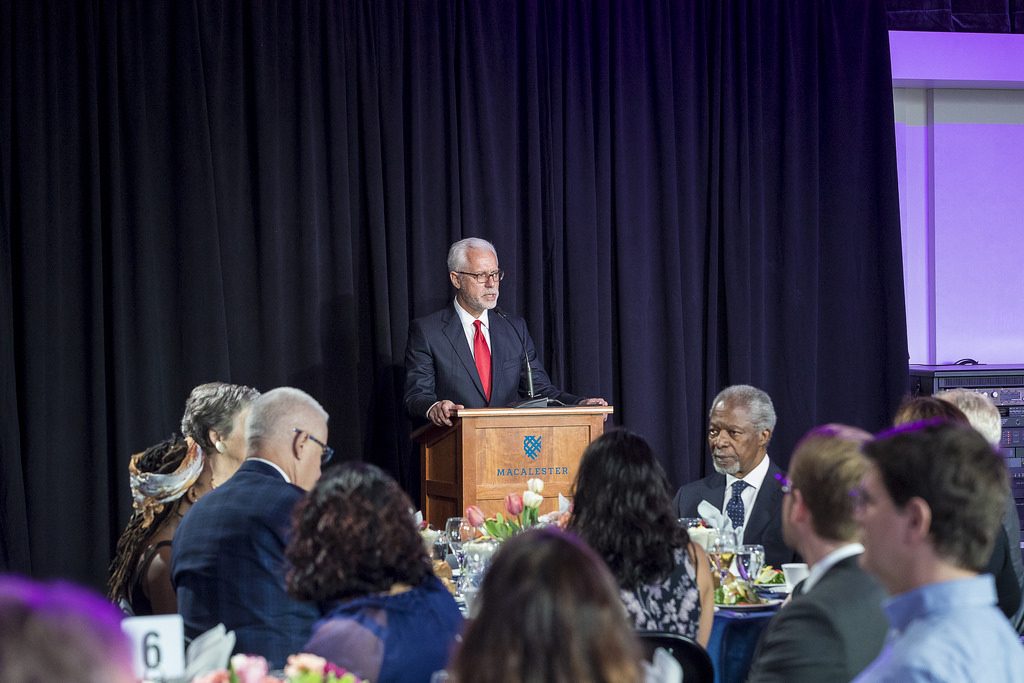 President Brian Rosenberg speaks at an event in May. Photo courtesy of Macalester Communications and Marketing.

The following is part of an interview that was conducted with Macalester President Brian Rosenberg in September. The transcript has been lightly edited for clarity.

TMW: I noticed that in your first-year orientation talk a couple of big themes were ‘you belong here’; ‘you’re not alone here.’ Were you influenced in that by what happened last year [the death of Matias Sosa-Wheelock by suicide]?

PBR: Absolutely. By what happened and also by just the more general question of the mental health of our students and this generation. I mean, all the evidence suggests that there’s an enormous amount of anxiety in this generation of students, despite the fact that you step into a community of 2,000 students and it’s really common for students, particularly students from lower socioeconomic backgrounds, first-generation students, [and] students of color to feel isolated or feel like it’s the imposter syndrome – I really don’t belong here.

If people ask me what my biggest worries are, the economic one is sort of the big picture one. But day-to-day, my biggest worry is just the well-being of our students. I don’t wake up every morning thinking ‘are we going to be financially viable in 15 years?’ But I do wake up every day on some level thinking, ‘I hope nothing bad happens to a student today.’ So it was very conscious.

Right now, for me, the two areas I think we really need to focus on in terms of student well-being are mental health, and then, as we become more diverse as a community, making sure that we have an inclusive environment on campus. If we can get better at those two things, that’ll really be meaningful.

TMW: I think the number one complaint I hear about you from students has to do with your salary. Are there responses you have to people who say, ‘we could pay everybody a living wage who works here if we were paying the president –

PBR: Believe me, I’m aware of that, and it’s not fun. First of all, the numbers are often misreported and misunderstood. People always pick the biggest number they actually can, so the number that they cite is the total compensation number – and that includes things like benefits, like healthcare, which adds about 20 percent to every person’s salary.

First of all, I don’t set my own salary. It’s dictated to some extent by the market. Our Board [of Trustees] benchmarks my compensation very carefully against other presidential compensation at other similar institutions, and we have that looked at by a consultant. My salary is given the fact that I’m in my 16th year, and [given that] it’s about where it should be – relative to peers, not to some independent sense of what’s just. People also have to remember that I don’t have tenure. Presidents, unlike even provosts and faculty members – a faculty member has essentially guaranteed – you can work at Macalester once you get tenure for the rest of your life. The average presidential tenure now is about five or six years. And so when you go into one of these jobs, part of the deal is, alright, you’re going to get a pretty high salary, but you’re not going to have a lot of security.

Now, I’ve managed to last a longer time than most, which means my salary – if you look at my raises over the last decade, on average they’re lower than the raises for faculty and staff because there are some years I’ve taken none, and then most years I just take the base of what everybody gets. But you stay long enough and it keeps going up.

Then the other thing I’d say, and I don’t like to talk about this a lot, but I give a lot of it back. I’ve given, in my time at Macalester, by the time this campaign is done, I think it will be close to half a million dollars back. When I do that, and I get pummeled, it is a little frustrating. Who wouldn’t be a little bit bothered by it? I know there are people who think, oh, you should pay the president – well I don’t what they think you should pay the president. Sometimes students don’t realize, there are a lot of faculty members who are getting six-figure salaries.

TMW: One of the very famous stories is of the CEO who lowered his salary to $70,000 and everybody in the company was paid roughly the same thing.

TMW: And I’m not saying you’re in that position, I’m saying that may be what people have in mind.

PBR: No, I know they’re thinking that, but what people have to remember is that in my first fifteen years of my career I was an English professor. And my starting salary when I was an English professor was $15,900. Then I was a dean, and my starting salary as a dean was lower than an average full professor’s salary at Macalester. So yeah, the last phase of my career I’ve been very well compensated. But it’s not like I’m a CEO of a Fortune 500. If my salary is three times the highest full professor’s salary, it’s not the CEO of 3M where your multiple [is] thousands.

Let’s say for the sake of argument you’re going to pay the president $200,000. You’re not going to hire anybody good. Someone would take the job, but it’s probably not someone that you’d want.

I also don’t understand quite why they’re mad at me rather than the Board of Trustees. How many people exist in the labor market and say, ‘I don’t want to get paid’ – it’s a lawyer going into a law firm and saying ‘you know, here’s what you pay starting associates, but I don’t want that. I want a third of that. Or a physician, or anybody – how many people exist in a labor market and say, I want to not get paid consistent with that market. The president gets blamed for everything. But if you really want to get mad at anyone, it should be the Board of Trustees.

TMW: The last thing is that you said that five years is the average tenure [of a college president]. You’ve been here 16 years. I remember the first time we talked about this campaign was a couple of years ago, and you said then that this was going to be your last campaign as president of the college. Is that still the plan?

TMW: And do you have an idea of a timeline for taking off?

PBR: But I do. I have an idea in my head of my timeframe, and, when the time is right, I’ll make that public. But right now it’s in my head.

PBR: But I have made a promise to myself from day one that I try not to outstay my welcome. And maybe in the view of some people I already have. I don’t want to be around a campus where people say, ‘when’s he going to leave already?’ I’d rather leave before that happens. And again, for all I know it’s happened already, but I have my own timeframe for that.

TMW: But you will stay through the end of the [Macalester Moment] campaign?

PBR: Yes. I owe that to the college. It’s really hard for a college when a president leaves in the middle of a campaign. That tends only to happen when someone gets fired or they just leave because they want to take a job that they think is a better job. I think I’ll do something after Macalester, but I will never be a college president again. I could not generate the engagement again with another institution that I feel with this one. So I don’t see myself just sitting around and doing nothing, but it will be something else.

TMW: Is this a job after 16 years that you still enjoy? Is it still stimulating?

PBR: It’s definitely stimulating, and there’s a lot about it I enjoy – not every moment every day, but yesterday I spent an hour with [Assistant Dean for College Access, Retention, and Success] Sedric McClure and [Associate Director of Educational Partnerships for College Access & Success] Ruth Janisch and all the students they work within the Bonner program and other programs, and I loved it. I talked for a little while and then I just answered their questions, and they were great questions. That hour I loved. It was, like, ‘this is so much fun.’ These kids are amazing. But then, you know, someone sues you, it’s not fun.