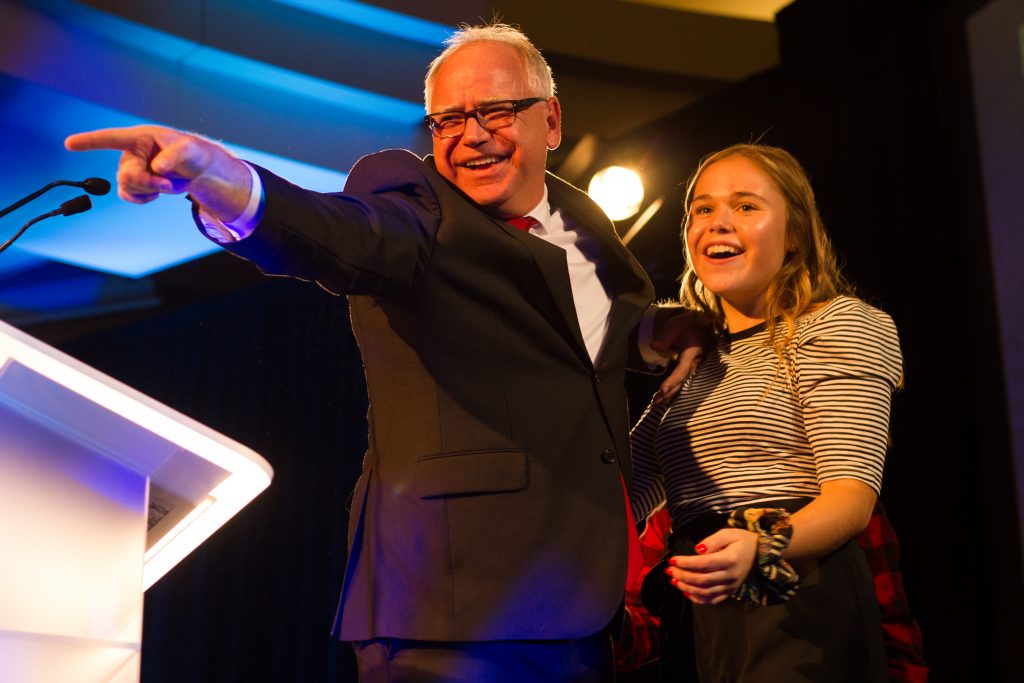 Throughout the night, party-goers crowded around televisions broadcasting MSNBC’s coverage around the hall, cheering on congressional candidates across the country as the Democratic Party retook control of the House of Representatives.

Eyes were also on high-profile races in Texas and Georgia, where Rep. Beto O’Rourke (D-TX) and Georgia House Minority Leader Stacey Abrams (D) made bids for a Senate seat and governorship respectively.

However, when polls in Minnesota closed at 8 p.m. and Sen. Amy Klobuchar (D-MN) officially won her reelection bid, the focus quickly turned to more local matters.

On the whole, the DFL had a hugely successful night – winning both Senate races, the Governor’s seat, the Attorney General’s office and flipping the second and third congressional districts in their favor. The Democrats also took a majority in the state House.

The party suffered losses, too. Republicans flipped Minnesota’s first and eighth congressional districts, winning the former by just more than 1,300 votes. St. Paul Mayor Melvin Carter and Minneapolis Mayor Jacob Frey, neither of whom were up for election, delivered the first speeches of the evening.

Carter set the tone for the night, sending a message of unity.

Frey took the latter stance, elaborating on Carter’s call for solidarity. “They tried to divide us using hate,” Frey said. “And what we said is that our family cannot be divided. In fact, we are united by love. We are united by love and we aren’t going anywhere.”

In her victory speech, Klobuchar called for bipartisanship. “We have to stand up not just for those who voted for us, but for those who didn’t and for those who stayed at home who were tired of the divisiveness in our politics,” she said.

“Whether you’re a Democrat or a Republican or an Independent, we are all Minnesotans and we are all Americans,” Klobuchar continued.

As she concluded her speech, Klobuchar, who won a landslide victory, choked up recalling the words of her former colleague, the late Sen. John McCain. “John McCain was a man of decency, and, when I last saw him, he pointed at some words in a quote – because he couldn’t speak the same anymore – and the words said this: ‘There is nothing more liberating than fighting for a cause larger than yourself.’ That is what Minnesota voted today,” she said. Rep. Tim Walz (D-MN), whose gubernatorial campaign centered on a vision to create ‘One Minnesota,’ echoed Klobuchar’s sentiments – committing to leader across party lines.

“I want to be clear, I know that there are many Minnesotans out there who might have had a different vision of Minnesota, and I have a message for those voters tonight,” Walz said. “I will be your governor just as much as I will be for the people in this room… everybody who is impacted by the decisions we make gets a seat at the table.”

Bipartisan promises or not, many speakers took shots at the GOP – and most were explicitly critical of President Donald Trump.

“It is early, but it appears to me that Minnesotans voted our dreams and not our fears,” Klobuchar said. “We voted for common sense and not blistering words. We voted for getting things done and not gamesmanship. And we voted for substance instead of subtweets.

“We voted for the way politics can be, should be, and, with your help, will be,” she continued.

For some attendees, partisanship was at the forefront of their decisions during these midterms.

“[Trump] has made it a referendum on himself basically to get out his base,” Henry Lippman ’68 said. “It’s interesting that the more knowledgeable people in politics on the Republican side said ‘talk about the economy.’ He decided to play on fear and I think that will come back to hurt him.”

Lippman summarized the Democrats’ national strategy for winning in 2018 in one word: “Trump.”

Partisan politics aside, it was a historic night for the DFL in many respects. “We have never elected the DFL to a third [consecutive] term as governor. Tonight, we’re going to do that,” DFL Chairman Ken Martin said. “Tonight, we will elect the first Native American to assume a statewide office. Tonight we will send a teacher to the governor’s office.”

That first Native American to assume a statewide office will be Walz’s running mate, the incoming, Lt. Governor and former State Representative Peggy Flanagan. “Growing up, I never saw someone who looked like me in a position of leadership,” Flanagan said. “My hope is that tonight’s victory shows young Native people across the state… that anything is possible.”

Sharice Davids (D-KA) and Deb Haaland (D-NM) will also become the first Native women to serve in the House of Representatives.

It was also a historic night for voter engagement. Projections suggest that 2018 saw the highest turnout for a midterm election in decades. Exit polls also suggest that voters between the ages of 18 and 30, also turned out in greater much numbers than in recent midterms.

Halla Henderson, a senior at St. Thomas University, served as the DFL campus organizer for Macalester, St. Thomas and Hamline. She saw this year’s huge spike in interest among young voters first-hand.

“I think the most exciting thing has been [that] there’s been a lot of youth and a lot of students who are really excited about this movement and this idea of youth power,” Henderson said. “We’ve shown up in numbers higher than ever expected before. The voting block of 18 to 30 is unprecedented, it’s never happened like this before.”

The turnout numbers at Henderson’s colleges largely reflected this. “At St. Thomas alone we only expected about a thousand people to show up for the midterms and we ended up having around 1,300, 1,350,” Henderson said. “At Hamline, we only expected around 900 people to show up, and we ended up [with] well over 1,100. Students have been showing up and they’ve been more engaged than they ever have been before.”

While the numbers were up for St. Thomas and Hamline, Macalester saw a lower-than-projected turnout, though Henderson suspects that might be because the college has more out-of-state students who voted absentee.

However, even with more young people voting than in prior midterm elections, there were Republican victories on Tuesday too. As the party raged on for the DFL, the GOP maintained control of the Senate and managed to stave off several Democratic competitors.

O’Rourke eventually lost his race in Texas to incumbent Ted Cruz (R-TX), while as of press time Abrams is yet to concede her race even as her opponent Brian Kemp declared victory on Wednesday afternoon.

“[I’m] super ecstatic about the state of Minnesota, really hopeful about the progressives that we’ve voted in,” Marco Hernandez ’19 said. “The rest of the nation though, when it comes to Senate races – disappointing. Texas – disappointing.

“Seeing the popularity of Beto among young, predominantly Latino or POC young people, really scared a lot of the white, conservative, Republican, Christians in Texas to go out in droves and vote for Ted,” he continued. Others agreed.

“It’s a good atmosphere here but it’s tempered by the outside – [by] national calamities,” Avik Herur-Raman ’20 said.

“I’m hesitant,” he continued. “I’m DSA [Democratic Socialists of America]. I think the Democratic Party needs to move left, but they’re stuck in the same 2016 mindset in many ways and it hasn’t worked out for them.”