Max the Cat: Where is he now? 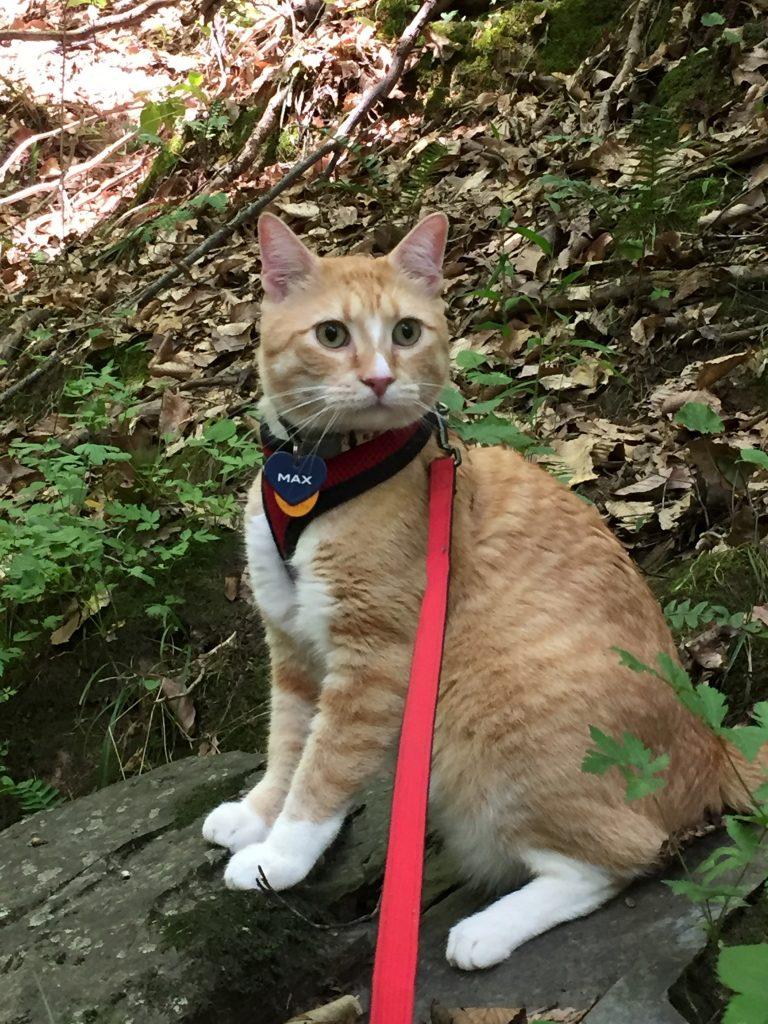 Max is king of the rock. Max has learned to walk on a leash since his rise to internet fame.

Late last fall Max the Cat made national and international news. The Washington Post, The Independent and even Belfast-based The Irish News wrote about Max and his escapades at Macalester.

Max went viral when the library employees posted a sign disallowing Max inside. Max was a frequent visitor around campus before the sign went up. He had been in dorms, gate-crashed gatherings on Old Main lawn and even took to visiting patrons of local restaurant French Meadow on their patio.

Gregory and Connie Lipton are Max’s humans. Gregory Lipton was a former professor of religious studies at Macalester and now teaches at High Point University in North Carolina. This led to Max’s move away from Macalester.

The Liptons adopted ‘memeable’ Max and his more sedentary sister Gracie in the Twin Cities. From the beginning, Max was adventurous; his humans knew that he liked to be outside and wander around, but they didn’t know how far he would go.

“I went down to get him and he was just laying down and ignoring me until I put the carrier down, and he bee-lined into it and was like ‘Okay, let’s go!’” Connie recalls of when it was time to bring Max home.

“It didn’t put Macalester on the map but it did make them sort of famous in a funny way,” Connie said of Max’s internet fame. Eventually, the Liptons kept Max primarily indoors, but he did make trips to campus for special events. Connie had taught Max to walk on a leash so they could walk around campus to give him more enrichment.

Max found the adjustment to North Carolina this spring difficult. “He has settled down now, but, for a long time, he was just howling around the house all day and all night,”said Connie “Part of it is that he can’t go out on his little roaming excursions like he used to do over to Macalester. He’s still dreaming of his freedom and time with all the students. We take him out for walks, but it’s not the same.”

Max has no immediate engagements planned at High Point University, but he has already visited the religious studies department to the delight of faculty, staff and students.
Max lives on a busy street, so he is being kept inside until further notice, but the Liptons keep him occupied. Max and Gracie share a cat tree at the new house, and the pair spend many house catching z’s on the perches.

“I need to play with him a fair bit, it’s gotten to the point where he will come over and nip at me to get me to play with him because he’s really bored. I have been clicker training him to shake paws to keep his little mind busy,” Connie said.

Connie plans to walk Max to the High Point University campus more often as the weather improves and maybe make some Max the Cat merchandise. She tried to get Max certified as a therapy animal while still in Minnesota, but he had trouble staying focused. He might re-enroll in classes after he is a little older and more mellow.

“He’s sort of a funny guy. [It] is unusual for a cat to like to play with their human. He likes to hide and then jump out at you and plays along the stairs and wacks at you. He’s a funny boy and makes us laugh a lot,” Connie said.

Max has 18.4k followers on Instagram and 1.1k likes on Facebook and Connie often gets comments from Max’s fans saying that, “they look forward to the posting and it just cheers them up. If that’s all he ever does, that’s great.” As for Max, he seems content with his lot in life and enjoys the extra attention in between his naps in sunspots and playing with his family.