A modern retelling of the original ghost story: Frankenstein at the Guthrie 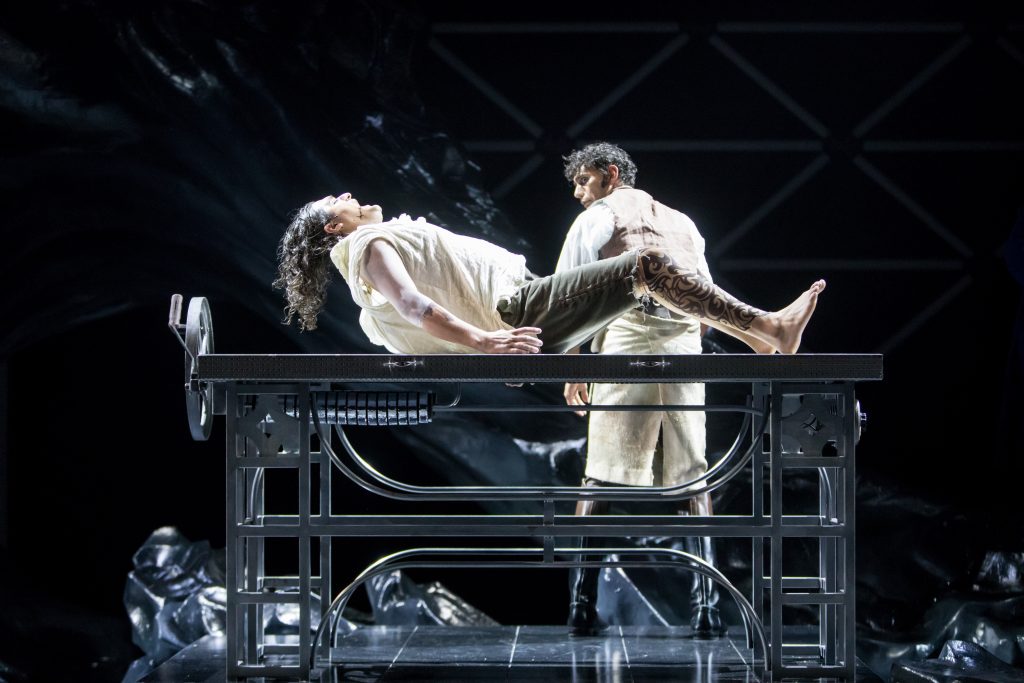 The air blowing off the Mississippi River had the crisp feel of fall, that hint of cold that prepares us before we plunge into the depths of true Minnesota winter. Inside the Guthrie Theater, a friendly warmth quickly replaced the memory of cold. I found my seat in front of the Wurtele Thrust Stage and settled in for a carefree night at the theater. Or so I thought. Scanning the stage, I felt a vague sense of foreboding. A frozen mountain occupied half the stage, its slopes like sweeping rivers of ice. Above the mountain, a red sun pulsated, slowly, and a thin string of notes, barely audible, floats in the background.

Together, these elements create the eerie backdrop of Frankenstein—Playing with Fire. The play celebrates the 200th anniversary year of Frankenstein, the famous novel by Mary Shelley. Barbara Field wrote the play as a modern retelling of the classic story. Field’s version evokes the same struggle between scientific discover and morality, the same philosophical questions about what makes us human, as Shelley’s original novel. Frankenstein—Playing with Fire was last performed at the Guthrie in 1988, and Field is a Minnesota playwright.

The play begins with two figures on stage: Dr. Frankenstein and his monster (the Creature), played by Zachary Fine and Elijah Alexander. The nature of their encounter is unclear. Frankenstein is an old man with a raspy voice, wrapped in furs to fend off the cold. He appears to be at the end of a long journey, having hunted the Creature to the “edge of the earth.” Yet there is no indication of why he has been hunting the Creature, or if he himself even knows why.

“You think you have hunted me all these years,” the Creature tells Frankenstein, toying with him. “No, I have been leading you.”

The Creature, having run from Frankenstein for years, is actually pleased to see his maker. He wants to know why he was made and why his maker abandoned him. Frankenstein is seemingly obsessed with the Creature’s mind, but only because it is a piece of scientific discovery (more accurately: science gone wrong). He writes down observations in a little notebook as they quip back in forth, their words barbed and hinting at some deeper, darker past that hovers between them.

Slowly, memories come forward to paint a vivid picture of the past. Actors playing younger versions of Frankenstein (Ryan Colbert) and his Creature (Jason Rojas) enter onto the stage in pools of yellow light that symbolize an earlier time. The older versions of these characters in the play’s present day lurk on the stage as these memories appear, at times interacting with their younger selves. Switching between memory and present, Field reveals pieces of the story one by one until the puzzle comes together. By the end, the audience knows why Frankenstein and his Creature are revisiting the past, what they have learned from one another, and where their true motivations lie.

In accordance with Shelley’s original novel, this modern retelling explores the same philosophical quandaries about what makes us human and what, if anything, makes us moral beings. Frankenstein has become a classic tale, retold in theater and film since the novel’s publication in 1818. The phrase ‘Frankenstein’s monster’ has become an allegory for science experiments run amok. The original story has been diluted by retellings simply meant to terrify, not always to teach a deeper lesson about morality or the hubris of mankind.

In Field’s version of the play, these philosophical themes return to the forefront. She engages with the surface-level storyline that has become household knowledge—the story of a mad scientist hunting down his monster—but then peels back the layers to show the complexity of these two archetypes. As Frankenstein and the Creature question one another at the edge of the world, they discover more and more that they have in common. Just as their true identities become sharper, more developed, they also meld into one another, becoming one murky image of human consciousness complete with numerous flaws and existential crises.

The play does justice to Shelley’s novel in more ways than one. Not only does Field bring back the depth of Shelley’s original characters, but she also honors the tradition of Frankenstein’s many retellings by adding elements of horror and drama. After all, Shelley did write her novel to scare, having entered into a playful contest between friends to write the best ghost story. She won that contest (against such competitors as Percy Shelley and Lord Byron, who were both celebrated poets), published her novel, and became the author of the first major publication of science fiction as we know it.

Rob Melrose, the play’s Director, creates a world on stage that deserves its place in the legacy of Frankenstein adaptations. That world is a unique work of science fiction in itself, complete with Jekyll and Hyde paradoxes and Twilight Zone suspense. Lighting, sound and set design play no small role in the storyline, creating an undertow of eeriness that pervades throughout the play. The ‘sun’ itself is a source of horror, turning unnatural shades of red, black and blue to symbolize the march of time to some terrifying end. The frozen mountain reflects these colors but holds some inner darkness that eclipses the sunlight. I wouldn’t be surprised to find the mountain actually cold to the touch.

The actors and actresses are well matched to their roles and to one another. Alexander plays a convincing Creature, his movements somewhat off-kilter and menacing, but also exhibits a level of maturity unknown to the younger Creature played by Rojas. Rojas, in contrast, plays a Creature lost and alone in the world, struggling to learn speech and become convincingly ‘human.’ Fine plays an elderly Frankenstein who is clever and proud, mocking his monster’s accomplishments and denying that he shares any similarities with this childlike create who claims to be his equal.

Colbert portrays the untried youth of Frankenstein when he was still a budding scientist with pompous ambitions. He disregards all consequences, rolling his eyes when his university teacher (played by Robert Dorfman) warns him of the future. Dorfman is a well-known face in the theater circuit, having acted on Broadway, and has a few prominent roles in television and film. Dorfman was the play’s comedic relief, allowing for necessary pauses in the drama.

Amelia Pedlow, who plays Frankenstein’s wife, Elizabeth, also adds a shift away from the private battle between Frankenstein and his Creature. Pedlow portrays Elizabeth as a moral, caring individual in stark contrast to her husband. She hints that there is a “fire inside” beneath her seemingly calm, innocent exterior. This comes to the surface when her husband treats her poorly.

There is one scene that portrays sexual violence, with Elizabeth as the victim to her husband. This is meant to show Frankenstein’s immoral character but is in somewhat poor choice. The scene seems overly dramatic, adding little to the storyline itself while playing into the trope of a female character becoming the helpless victim of a man’s pride. Elizabeth’s body is used as a plot devise to develop Frankenstein’s character. Violence against her body is used as a prop to create a sense of horror.

That being said, the play as a whole is clever and captivating. It is dramatic and larger-than-life because that is part of Frankenstein’s appeal. The story is meant to leave one feeling jumpy, looking over one’s shoulder for some terrifying monster lurking in the shadows. After all, it was originally a ghost story, albeit a ghost story with a twist.

If you like asking philosophical questions about science, consider yourself a fan of science fiction, or just want a Halloween-season scare, Frankenstein: Playing with Fire will be a thoroughly enjoyable experience. Showings at the Guthrie until Oct. 27.