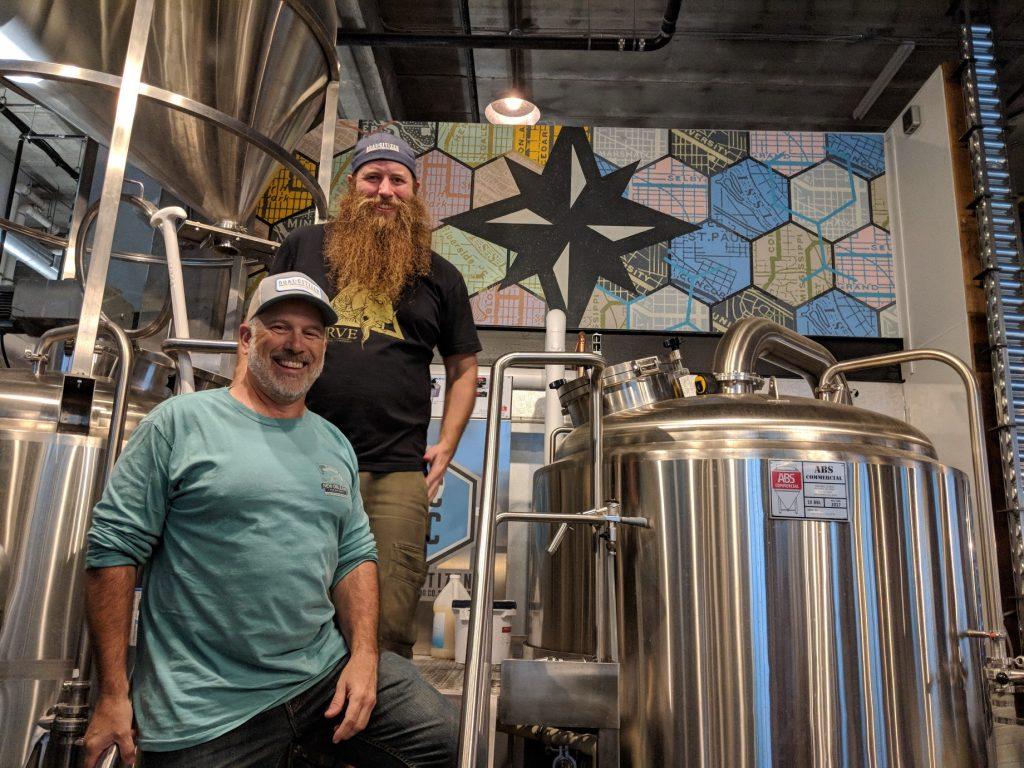 “What does being a dual citizen mean to you?” the brewery’s website asks its customers and employees. Opening its door just eight months ago in January 2018 on the corner of University Ave. and Raymond Ave. in St. Paul, Dual Citizen now finds itself in the center of neighborhood festivities, asserting itself as a communal meeting place for both “citizens,” those from Minneapolis and those from St. Paul. The next big community event is a block party hosting some of Minnesota’s finest bands, beers and food.

“Blocktoberfest” will happen Saturday, September 29, from 12 to 7:30 PM, so mark your calendars.

The product of cousins Max Filter (head brewer) and Tim Kessler (general manager), Dual Citizen takes the perceived difference between St. Paul and Minneapolis head on. “We are better together than apart,” Filter writes on their site. Born in Minneapolis and raised in St. Paul, he says he’s never understood the desire to separate the two metros. To him, the brewery represents a desire to look “past the petty rivalries and embracing the notion that our differences define the best parts of our shared culture.”

Filter’s career in brewing began humbly. He attended Lewis and Clark College in Portland, Oregon and began homebrewing in his dorm room closet. Simply, he said, to avoid drinking PBR. But the brews got a good reception from his friends, so he kept at it. When he returned to Minnesota in 2009, he and Kessler upped the ante, saving up to buy better equipment and even bought a rundown house with plans for a taproom. When that didn’t pan out, the two took a step back to learn more.

They attended the Siebel Institute of Technology’s Craft Distilling Operations Program in Chicago and then began working in breweries. Filter wound up at Left Hand Brewing in Colorado before moving to Renegade Brewing, where he quickly rose from assistant to head brewer. During his four years with Renegade, Filter helped the company increase production from one thousand barrels to six thousand a year and transition into new brewing and packaging facilities. But the plan was always to come home, said Filter.

He and his epically long beard returned to Minnesota in 2016 to team up with Kessler and other members of his extensive family (he has over 60 cousins). Filter’s father scouted buildings, ander Blackstack and Venn both passed on the Raymond Ave. location, the family was quick to snap it up. With the facility and taproom just across the street from the green line and half a mile from the border of the two cities, the name practically wrote itself.

In the vein of bringing the Cities together, Filter hopes Dual Citizen can be a community destination. Currently, they have no plans to can or bottle their beers, instead keeping the focus on the taproom. Food isn’t even “on the table” because the brewery has collaborations with the Naughty Greek (next door), as well as a variety of beef sticks and jerky. They have no interest in being the next Surly or Indeed, but instead being a center for locals to work, relax and enjoy each other’s company, no matter what side of the Mississippi they live on.

Filter’s beer represents this mission as well. Not big on trends, he prefers to brew a diverse array of beers with a simple criterion: the beer should taste good. The tap list changes frequently, with only a few constants, like their popular Kellogg Cream Ale. At the moment, I recommend the Osceola Amber, a hoppy red ale with a deliciously complex array of malt, the Hiawatha, a smooth imperial IPA and the Dewey Kettle Sour. However, the flavor of the month is Oktoberfest, scheduled for release during Dual Citizen’s Blocktoberfest. I was lucky enough to taste the specialty marzen lager in advance and was not disappointed. In fact, it may well be the most flavorful, rich and savory O-fest I’ve encountered in my short life.

And don’t forget to try out four other local breweries at Bloktoberfest, including Blackstack and Urban Growler, then wash down your beer with some Naughty Greek or an item from one of the many food trucks. So, what does being a Dual Citizen mean to you? Come share your thoughts with co-citizens over a pint this Saturday and experience what this welcoming new brewery has to offer.