Way Back at Mac: A brief history of the Kick–ass Caucus 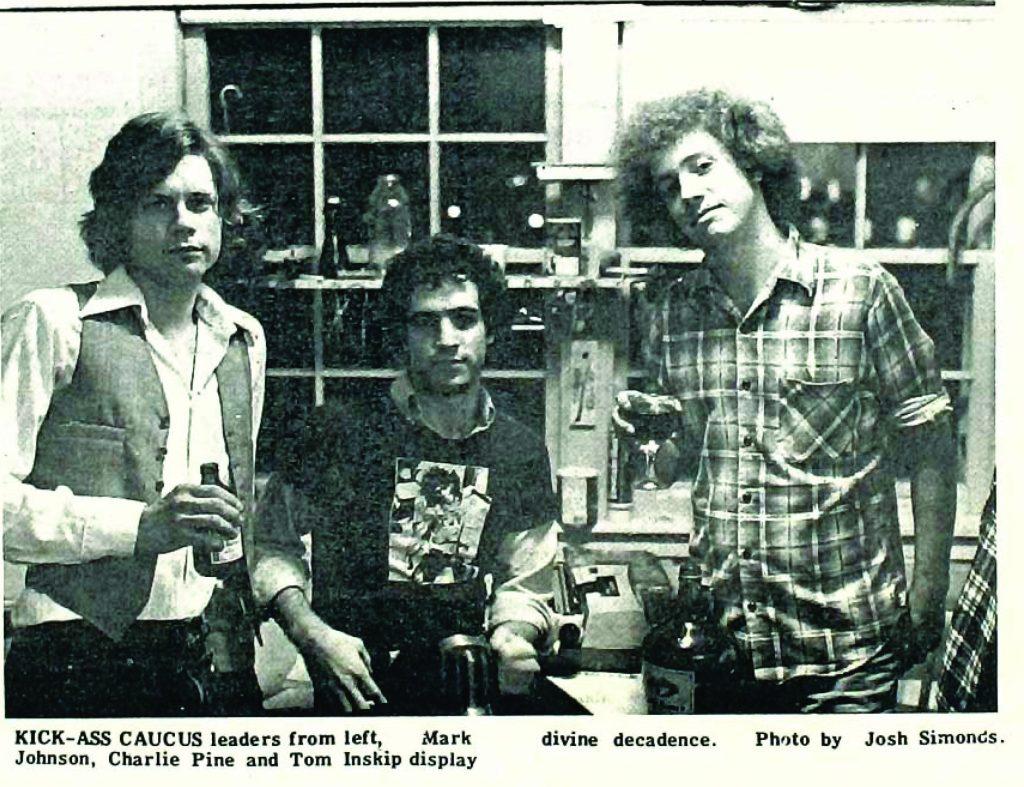 On April 29th, 1977, a group of Macalester students wrote a letter to the editor of The Mac Weekly citing their intention to take over the paper. With threats such as “our will is unrelenting” and “we will accept no terms on the inevitable surrender of control of the newspaper,” it is safe to say that more than one student may have spilled their morning coffee over the paper as they leaned in for the details, “A scholarly skirmish?” “a paper polemic?” Just who was this group of undergraduate upstarts? Sincere change seekers or rabble-rousers looking to stir the pot?

Evidence suggests they were all of the above. The loosely organized group known as the Kick-Ass Caucus, or more simply, the KAC, formed in 1976 in response to what they perceived as growing institutional power and lack of student input surrounding on campus issues. Self-described as a “pervasive social and cultural group” in the November 18, 1977 edition of The Mac Weekly, KAC general-for-life, Tom Inskip, noted that the group’s purpose was “to heighten the intellectual awareness of the community.” Charlie Pine, KAC’s “court jester,” complained, “The Admissions Office has abandoned their goal of social and economic diversity at Macalester. They’ve gone for the almighty dollar, recruiting down-vested suburbanites and the inert Gucci set from plastic America. It’s obvious that this is leading the college into the realms of total entropy.” And, of course, we musn’t forget, Mark Johnson, the Admiral of the landlocked navy who further clarified, “We exist to heighten intellectual acne at Macalester.”

With their ideals held loftily overhead, the “general-for-life” and his sidekicks launched campaigns and shenanigans to put power back in the hands of the students. One of their more well-known campaigns sought to abolish the community council (CC), a precursor to Program Board. Perhaps KAC were peeved the CC only allotted them $12 in the 1978 activity fund, but the KAC’s purpose seemed to run deeper than that. Inskip made his feelings toward the CC known in the April 7, 1978 edition of The Mac Weekly writing, “The only people who run for CC are pre–law students whose only goal is to create a new bylaw and name it after themselves. The CC distributes our activity fees to student organizations that reflect the CC member’s political and ethnic backgrounds.” He advocated taking funding power away from the CC and allowing students to divide the budget themselves.

The KAC also took a few stabs at infiltrating student government. During the 1978 student body government campaign, Eric Dewey of the KAC certainly took the cake for the most bizarre platform: promising to abolish student government if elected, he swore he would resign within two weeks of taking office. Dewey and the 18 other KAC members who ran for other positions received approximately 15 percent of the total vote although seven of their members won in uncontested elections. Dewey, unfortunately, did not have the satisfaction of quitting two weeks into his presidency, but his fellow party members did – resigning shortly after their respective inaugurations.

That was my initial impression of the KAC: campus rebels, pot-stirrers who talked the talk but were never taken completely seriously and never did any real damage or instigated any lasting change. But, as I delved deeper into the archives, my perspective shifted. Issues regarding the organization’s culture began to rise to the surface in November of 1977. A close reading of the letters of the editor and other articles uncover indications of a problematic sexist culture within the KAC. Interviewed for the November 18, 1977 edition of The Mac Weekly, admiral of the navy Mark Johnson said, “We’re no more sexist than the Mac Feminists ever were, and we encourage women to apply for membership in this organization.” Johnson additionally commented that this statement should not be construed as sexist and that they, “encourage women to apply for membership in their organization.” At the time, the group appeared to be comprised only of males. On December 2, 1978, in a response to Johnson, Mac Feminist member Shelley Hagan wrote, “men are welcome participants in the Mac Feminist collective. We really do try not to judge people on the basis of membership in groups, whether ‘men,’ ‘biology majors,’ or even ‘Kick-Ass Caucus members.’

On March 3, 1978, a letter signed by the KAC blamed women for calling Macalester men “emotionally quadriplegic,” and further blamed women for miscommunications between genders on campus. In the same issue, another letter written by KAC member Tom Inskip began, “It has come to our attention that a former comrade of ours has written a juvenile letter to you this week. The Kick-Ass Caucus totally denies any ideological identification with the facist and sexist polemic included in the letter written by Mark Johnson under the guise of the KAC.”

With Johnson ousted from the KAC, was the group free of its sexist ideologies or was Johnson simply part of a larger issue? Unfortunately, the only facts I have are the ones I have shared with you, and it is difficult to assess this group’s cultural impact without having experienced it firsthand. I’m curious at to the KAC’s perception on campus. On paper, it appears as though the KAC wasn’t taken particularly seriously; however, the archived Mac Weekly articles don’t emphasize the opinion of the student body on this particular group. Therefore, KAC may have negatively impacted the student body as it could have contributed to a sexist culture if the ideology extended past Johnson. Another potential source of error in my research, is my inability to interview these members making their objectives quite muddled. Was an increase in student power their true aim? Were the majority of their articles in jest? Was this group parading under the guise of social change but really touting a culture of toxic masculinity?

As before, the answer may be all of the above. However, their impact did not continue much past 1978, as after the 1978 elections and resignations of KAC members from student government, it seems as though some members resigned from the KAC as well. The last mention of the Kick-Ass Caucus in The Mac Weekly archives is on September 15, 1978 citing the resignation of the newly elected CC members. However, it seems as though the KAC made amends with The Mac Weekly in the end, as “general for life” Tom Inskip soon received a new title of “staff writer” for paper in 1979. . • [email protected]