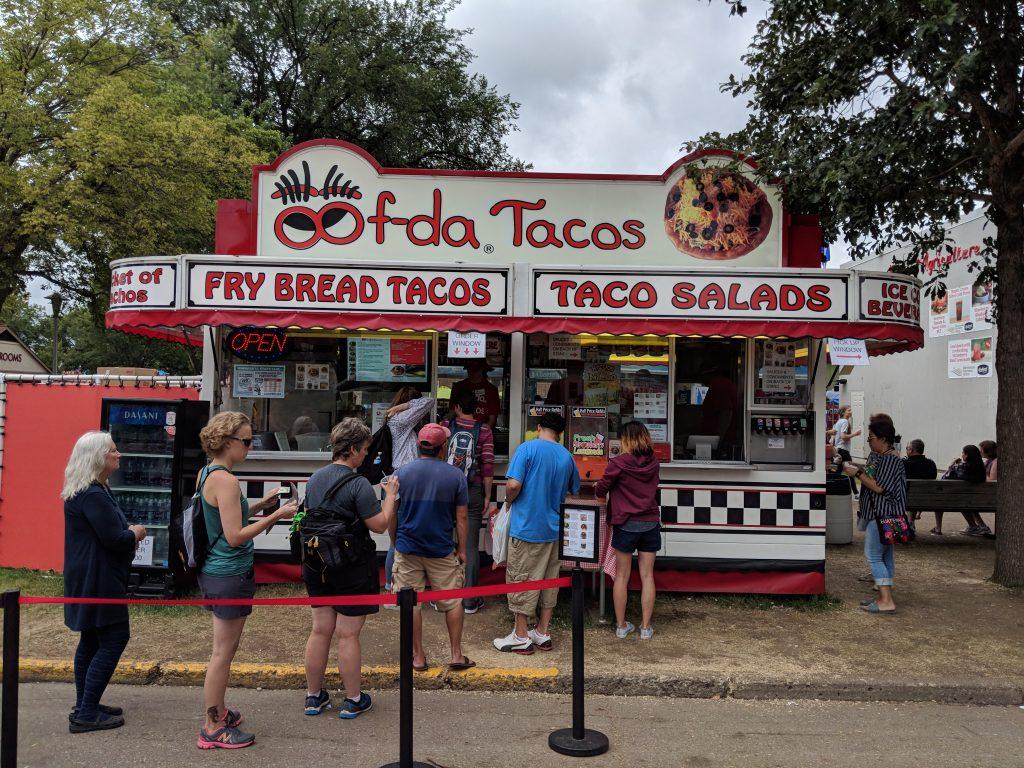 One of the many intriguing and unique stands offered at the Minnesota State Fair. “Oofda” Tacos offers a bucket of nachos, fry bread tacos, and taco salads. Photo by Henry Nieberg ’19.

As the warm Minnesota summer winds to an end, the Minnesota State Fair rises up in an effort to preserve the very last of summer. Kids, students, families and tourists come from around the state to enjoy everything the fair has to offer. This includes, but is not limited to, live music, petting zoos, rodeos, carnival rides and more. However, everyone who goes to the fair knows that the biggest attraction is the food. This summer, I was able to go to the fair and try to experience and document some of the most unique dishes that were offered.

As always, there are the Minnesota State Fair classics. There are the footlong hot dogs, the head-sized turkey legs, “Oofda” Tacos, the fresh-cut french fries, and of course Sweet Martha’s crispy, salty, savory, sweet bucket-load of chocolate chip cookies. There were the booths that I am always too scared to go to, such as the deep fried candy bars booth, fried olives booth, or deep-fried Spam burger booth. However, what were the new foods for 2018? What were the most original or exciting?

Throughout the fairgrounds, there were many excessively-caloric options that I can’t imagine seeing anywhere outside of the fair. There was the BBQ Split, which consisted of scoops of BBQ pulled pork, mac & cheese, and coleslaw served with a pickle. There were shrimp-stuffed avocados, General Tso’s chicken tacos, pepperoni chips and nordic waffles. The fair also included some dishes more “familiar” to the American eye, such as Tuna Poke Bowls, Blueberry Rhubarb Cobbler, grilled peaches, ceviche, and Swedish meatballs.

Out of all the foods this year, I found two that stood out to be original, tasty, and related to Minnesota. The first was the six dollar deep-fried hotdish-on-a-stick . This concoction sounds disgusting (what doesn’t at the state fair), but was the ideal combination of Americana and Scandinavia. This dish had skewered Swedish meatballs, wrapped around tater tots, and dipped into corn dog batter. To finish this all, you dip the “hotdish” into a mushroom-hamburger sauce which surprisingly creates the creamy casserole-style dip that tastes truly Minnesotan. In all honesty, I was actually impressed; it successfully combined the best elements of both the corn dog (fluffy outside batter) with the best elements of the hotdish (salty and savory meat).

While the hotdish-on-a-stick was good, I left the state fair craving something else: the Honey Cream Soda Float (available for nine dollars). This beautiful creation consisted of ice cream and cream soda that both were infused with Minnesota-grown honey. With no added sugar, this float was the perfect way to end a sweet summer. Due to the price and the calories, I would recommend splitting this with a friend or a significant other. If this dessert doesn’t “float” your boat, then the honey ice cream and the honey lemonade were equally as delicious.

The Minnesota State Fair is always an exciting time for me because it makes me think of starting a new school year, seeing old friends, and trying quirky foods, and this year kept up that tradition. Let’s see what you have next year, Minnesota.