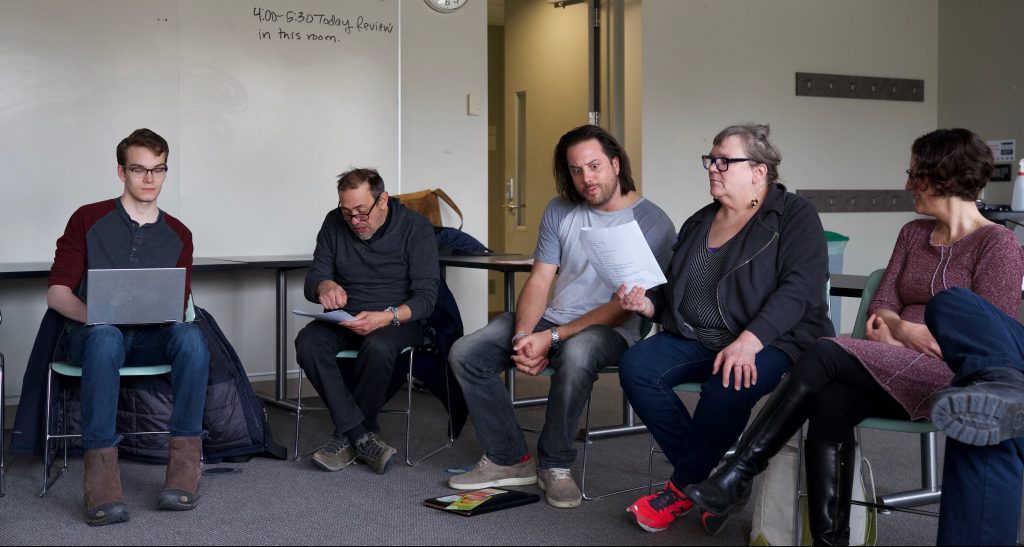 Starting from the second person on the left, Dario Tangelson, Lucas Erickson and Maria Asp perform a reading of 'The Lorax.

Each Thursday, the environmental studies department hosts a speaker, usually an academic, on environmental topics ranging from pesticides to energy policy to the zero-waste movement. The EnviroThursday event held on April 12, however, was about something very different — Dr. Seuss’s “The Lorax.”

The presenters — Lucas Erickson, Maria Asp and Dario Tangelson — are from a program called On Stage: Creating a Community Audience Around Live Theater, which is run by the non-profit Springboard for the Arts. The program, created by Erickson, aims to help set the foundation for a new generation of theater-goers by holding discussions about upcoming local performances in high school and college classrooms. The discussions tie the plays’ themes into what students are studying. Although On Stage typically focuses on plays for adults, Erickson thought that it would be a fun challenge to use “The Lorax,” showing at the Children’s Theatre Company from April 15 – June 10, to spark discussions with college students about today’s environmental issues.

The classic children’s book, published in 1971, explores themes of greed, capitalism and environmental destruction. The Lorax, a creature who “speaks for the trees” through tongue-twisting rhymes, advocates for the preservation of his home, a valley filled with Truffula trees. The Once-ler, a personification of big business, refuses to heed the Lorax’s warnings and cuts down every last Truffula tree, causing his own business to shut down and all the animals to leave the area.

Although it may seem like a simple children’s story, the book has courted a surprising amount of controversy. In the 1980s, families in a California school district attempted remove it from reading lists due to its negative portrayal of loggers. The lumber industry went as far as to produce a rebuttal book, “Truax,” where Truax the logger teaches a Lorax-like creature called the Guardbark about the sustainability of logging.

The presentation featured readings from the play done by Asp and Tangelson, who are both local actors and theater educators. After each reading, the presenters would ask the audience — a group of close to twenty people, including students, professors and staff — to discuss their reactions to the reading, first in small groups and then as one large circle.

The audience connected the readings with a variety of concepts and current events, including critiques of capitalism, no-growth economies, logging controversies in the Pacific Northwest, Native American treaty rights and Minnesota’s proposed Line 3 pipeline.

Although the presenters and audience clearly held environmentalist views, they made an effort to empathize with other perspectives as well as to recognize that the story’s message could become oversimplified.

Asp asked the audience to try to see things from the perspective of the Once-ler, who cuts down trees to provide for his family. Students raised the point that the environmentalist movement should avoid elitist perspectives and recognize that not everyone can afford to have an environmentally-friendly lifestyle.

“I felt really sympathetic for the Once-ler in [Tangelson’s] reading of it that I never felt when I read it in the book,” said environmental studies professor Roopali Phadke.

“Every read is going to be very different, that’s what makes theater interesting versus film,” Tangelson said. “Every time you see [a play], if you go the next day it’s going to be different. You might know a play or a story but if you see it again, based on where you are in your life it echoes differently.”

At the end of the presentation, the discussion transitioned to the importance that children’s literature has on establishing values for the next generation. Dr. Seuss, whose real name was Theodor Seuss Geisel, was well aware of the impact books like his can have on young minds. After all, college students’ values have already been solidified to some degree, but young children are highly impressionable.

“Children’s reading and children’s thinking are the rock-bottom base upon which this country will rise. Or not rise,” Seuss said in 1960. “In these days of tension and confusion, writers are beginning to realize that books for children have a greater potential for good or evil than any other form of literature on earth.”

Phadke brought up the popularity of dystopian young-adult literature, such as “The Hunger Games,” and how their themes of “turning the tides on power” may have influenced young people in the age of Trump.

“Part of the reason youth activism is high now is the result of growing up on those books, which are very dystopian but also have agency,” she said.

Overall, the presentation opened up a valuable discussion on today’s environmental problems and the way that art, even art for children, can help us see new perspectives. Remembering the lessons of “The Lorax” is important for today’s students and future generations, because, as Seuss writes at the end of the book, “Unless someone like you cares a whole awful lot, nothing is going to get better. It’s not.”